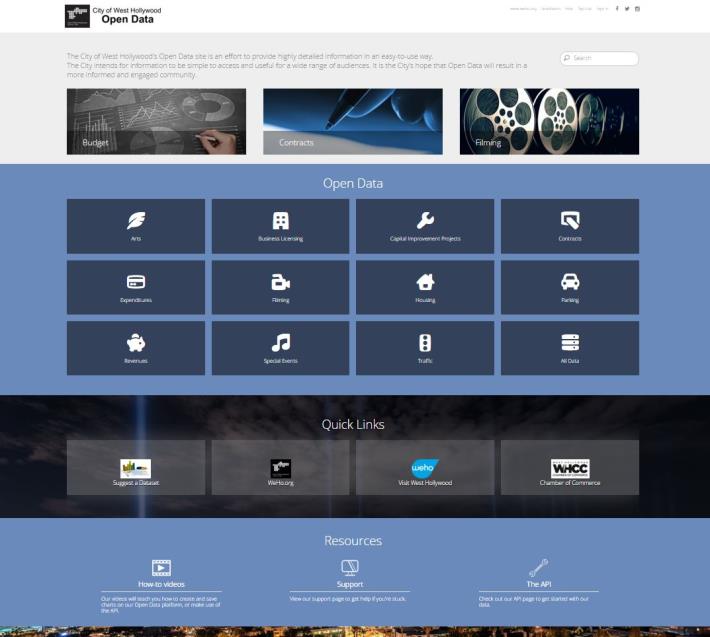 In an effort to increase transparency and provide city government data in an easily accessible, user-friendly format, the City of West Hollywood has launched a new open data website: data.weho.org. The City’s goal is to provide robust information to the general public in a highly accessible manner. Open Data can help drive innovation and problem-solving, increase community engagement, and empower residents, businesses, and the public-at-large to access complex information and use it for the benefit of the community. In addition, Open Data helps the City to maintain a high level of transparency.

“In West Hollywood, innovation is in our DNA,” said City of West Hollywood Mayor Lindsey P. Horvath. “As a City, we are deeply committed to the highest level of innovation. The City’s new Open Data site is an exciting milestone — we’re embracing new technologies that help strengthen and support transparency in local government.”

Following the lead of the federal government’s 2013 Open Data Policy, the City of West Hollywood joins with forward-thinking cities across the nation in embracing an Open Data initiative — the City is now ranked in the top 40 on the Open Knowledge list of cities with open data.

In addition to increased public participation, the City of West Hollywood hopes that accessible, usable data will drive efficiency, assist businesses, improve public services, and provide entrepreneurs with the information they need to propose projects or create apps to serve the community. For example, Open Data initiatives in other cities have led to the creation of apps that provide information on restaurant inspection ratings, bicycle-friendly routes, public art guides, and more.

The City of West Hollywood is passionate about adopting fresh new ideas and the latest in technological advancement. In 2015, the City released its first-ever WeHoX Innovations Annual Report, which examines the City’s recent civic innovation programs. The report, which is available for download at www.wehox.org, introduces new initiatives to enhance citizen satisfaction and engagement, increase efficiency and transparency, and promote the City’s innovations economy. The City, in 2015, also launched its West Hollywood Official City App, which includes a variety of features and functions to help connect West Hollywood residents and businesses to City Hall. The app is available for download for iPhone users on the App Store and for Android users on Google Play.

For additional information about the City’s Open Data initiative, please contact Jim Duncan, the City of West Hollywood’s Systems Engineer Supervisor, at (323) 848-6485 or at jduncan@weho.org. For people who are deaf or hearing impaired, please call TTY (323) 848-6496.