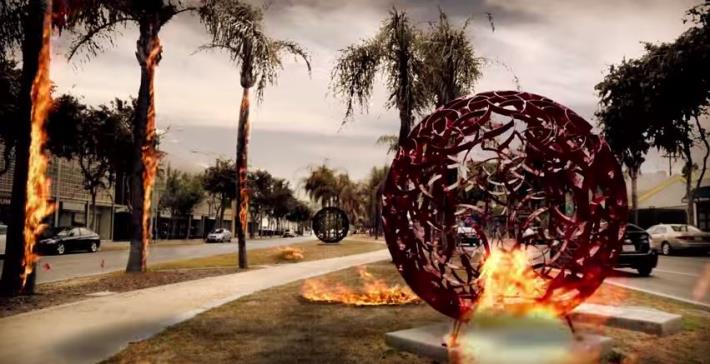 The City of West Hollywood has been chosen as a Los Angeles Area Emmy Awards nominee in the category of Public Service Announcement (PSA) for the City’s WeHoTV Channel’s 60-second public service announcement (PSA) video: Winter is Here! But the Drought is Far From Over., the Television Academy announced.

The City’s nominated PSA, Winter is Here! But the Drought is Far From Over., is a parody on HBO’s Emmy winning series Game of Thrones.  Designed as a mock TV-series preview trailer, the one-minute video takes audiences on a dramatic journey; however, instead of traveling through the mythical land of Westeros, viewers travel on a storybook tour of what a fictional West Hollywood may look like if the drought continues. The video is available on the City’s WeHoTV YouTube Channel at https://youtu.be/ybKFa2X6RB8

“The Game of Thrones inspired drought parody helped shine a lighter note on the Armageddon-like messaging that was pervasive due to the severity of the region’s epic drought. West Hollywood likes to utilize creativity and innovation to engage our community members. Our goal was to show how daily choices can affect individual lives as well as the community at large,” said City of West Hollywood Mayor Lauren Meister. “The Emmys received a lot of entries this year and we’re thrilled that Winter is Here! But the Drought is Far From Over. stands out for its novel approach. We’re reaching folks who would not normally pay attention to public service announcements and educating them on water conservation.”

Winter is Here! But the Drought is Far From Over. was developed and produced in-house by the City of West Hollywood's Communications Division. Execution of creative services was provided by ZooFX, a full-service TV and Video Production House, and by director Josh Morgerman of Symblaze.

The video was released in partnership with Change the Course, a first-of-its-kind water sustainability campaign that leverages its partners — Participant Media, National Geographic Society, and the Bonneville Environmental Foundation — to engage communities in understanding how daily choices affect our water footprint and to inspire people to take action in their own lives and pledge to conserve water. Viewers of the video are encouraged to take the free pledge of support and #changethecourse via text-message (text WEHO to 77177) to restore 1,000 gallons of water to endangered rivers.