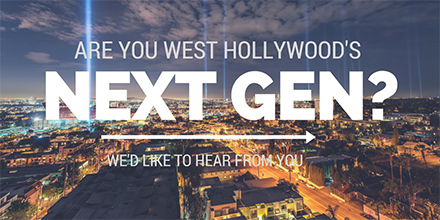 The City of West Hollywood is launching an online survey to seek feedback from young adults in the community as part of an effort to ensure that the voices of young adults in West Hollywood are represented within the community and in local government. The survey is web-based and will be promoted on the City’s Facebook and Twitter pages (@wehocity).

According to the figures from the 2010 Census, approximately half of the City of West Hollywood’s population is under the age of 40 — yet millennials remain underrepresented in elected and appointed leadership roles.  In an effort to reach out to this demographic and engage the “next generation” of stakeholders and leaders, the City is asking young adults to complete a short online survey, which is available at www.surveymonkey.com/r/wehonextgen.

“We want to ensure that all West Hollywood residents have the opportunity to contribute to the success of our city,” said Councilmember Lindsey P. Horvath. “‘Generation Next’ will provide important input and insight from our community’s largest stakeholder group and next generation of civic leaders.”

Earlier this year, the City Council of the City of West Hollywood approved the creation of a Young Adult Advisory Board, which would be representative of the City’s younger demographic. It would focus on matters relating to young people, such as education, economic opportunity, workforce entry, transportation, housing and engagement. As an Advisory Board, it would foster ideas for innovation that result in recommendations to the City Council.