City of West Hollywood Reaffirms its Core Values and Commitment to LGBT People, Women, and Immigrants 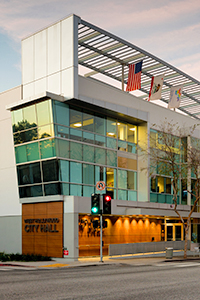 The City of West Hollywood is taking bold action to reaffirm its commitment to its core values and to work tirelessly to defend the fundamental rights of community members as Donald J. Trump takes office in Washington, DC. At its regular meeting on Monday, December 5, 2016, the City Council of the City of West Hollywood approved several actions to respond to the incoming administration, which include:

“Regardless of what happens in Washington, West Hollywood will remain a beacon of inclusion and equality,” said Mayor Pro Tempore John Heilman. “As a City, we have reaffirmed our core values and our commitment to women and girls, to a full array of reproductive health care, and to equality — full equality — for the LGBT community. We are prepared to fight to protect the rights of our residents.”

The City of West Hollywood has begun monitoring proposals by the incoming administration that could negatively impact LGBT residents, people with disabilities, seniors, people of color, immigrants, women, and others who have been negatively targeted. West Hollywood City Hall’s newly convened staff working group is focused on proposals that signal a dramatic shift and stand in direct contradiction to West Hollywood’s core values. Focused attention is being paid to large-scale policy changes that may have a direct negative impact on West Hollywood’s residents, including:

“We will continue to do what we do best — defend our residents and the values we cherish,” said Councilmember John D’Amico. “Though the immediate future may seem grim, we cannot survive on ‘us’ against ‘them.’ I am optimistic that good people will continue to act in responsible ways to secure and maintain a place in America for everyone. And West Hollywood will continue to lead the way.”

More than 40 percent of residents in the City of West Hollywood are lesbian, gay, bisexual, or transgender and many LGBT people in West Hollywood are alarmed about Mike Pence’s virulent opposition to LGBT equality and his belief that homosexuality can be “cured” by the discredited concept of reparative therapy. West Hollywood also has a long-standing commitment to supporting women; it was the first city in the nation to declare itself pro-choice and it has continually supported state and federal legislation protecting and advancing women’s reproductive rights and access to health care. Many women in West Hollywood are distressed about proposed plans to defund organizations that provide essential healthcare services for women.

“Mr. Trump made it very clear he intends to go after Roe v. Wade and I hope that gay men in West Hollywood and elsewhere realize that Roe v. Wade is, in fact, the lynchpin that holds our equality together,” said Councilmember John J. Duran. “Without privacy rights under Roe v. Wade, the struggle for LGBT liberty, equality, and the freedom to marry would not be available to us today. We’re prepared to do battle once again and we hope that young people link arms with those of us who’ve been around for a while longer, so that we all stand strong during the upcoming years.”

“The incoming administration is building a team that has the potential and the desire to undermine our most fundamental human rights,” said Councilmember Lindsey P. Horvath. “The most powerful thing that we can do is be West Hollywood — be exactly who we are and show everyone what a model city and what a model community looks like.”

The City of West Hollywood has declared that it will remain a sanctuary city and that it will not participate in any effort to deport immigrants living or working in the City. This includes directing the West Hollywood Sheriff's Station not to provide assistance to federal agencies who are attempting to harass, arrest, or deport undocumented workers or immigrants.

In the upcoming months, the City of West Hollywood will offer programming to focus attention on threats to civil rights and civil liberties faced by members of the West Hollywood community and the City will continue fighting vigorously to protect the lives and well-being of its residents, community members, and people across the nation and the globe who identify with West Hollywood’s core values.