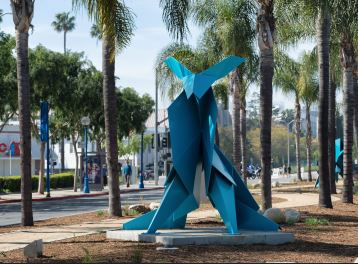 Despite recent rainstorms and marked improvements in water reservoir levels, the State of California has experienced extreme drought during the past three years. The threat of a severe water shortage is a serious one in the City of West Hollywood, where daily existence depends largely upon water piped in from sources outside the region.

As part of a series of efforts to cut back water usage and encourage conservation in the community, the City of West Hollywood has partnered with West Basin Municipal Water District (West Basin) and recently installed an Ocean-Friendly Demonstration Garden in the median of Santa Monica Boulevard, east of N. Doheny Drive.

A Ribbon-Cutting Ceremony unveiled the garden, which was completed in February 2017. The event took place on Wednesday, March 29, 2017 at 10 a.m. at the site of the Ocean-Friendly Demonstration Garden in the median of the 9000-block of Santa Monica Boulevard, between N. Doheny Drive and N. Almont Drive. West Hollywood Mayor Lauren Meister and members of the West Hollywood City Council in attendance, joined by West Basin Division IV Director Scott Houston.

“As a City, we are passionate about ecological stewardship and advocacy,” said West Hollywood Mayor Lauren Meister. “One of our core values is responsibility for the environment and we are committed not only to reducing our water usage, but also to raising awareness and educating individuals and businesses about how we must all make permanent changes, not just during times of drought. The Ocean-Friendly Demonstration Garden, made possible by West Basin, is a wonderful project that deepens the City’s commitment and serves to remind people, each and every day, about conservation.”

West Basin coordinated with the City of West Hollywood’s Department of Public Works to oversee the procurement and installation of the Ocean-Friendly Demonstration Garden. The garden was designed with ecological principles and water conservation in mind using water-efficient plants, native to California, that showcase the beauty of drought-tolerant plantings.

The Garden is also a location for the display of artworks curated through the City of West Hollywood’s Art on the Outside program, which installs rotating temporary artworks on the City’s medians and in parks. Currently on display is “The Chase,” a series of four, origami-inspired, powder-coated, steel sculptures depicting two scenes that dramatize survival by artist HACER, who is renowned for his bold metal sculptures that explore psychologically complex themes. For more information, please visit /community/arts-and-culture/visual-arts/hacer.

During the past three years, the City of West Hollywood has intensified its efforts to use less water and to promote conservation. In order to reach the community in a creative way, the City produced an Emmy Award-winning public service announcement, Winter is Here! But the Drought is Far From Over., which is a parody of the HBO series Game of Thrones. Designed as a mock TV-series preview trailer, the one-minute video takes audiences on a dramatic journey. The video is available on the City’s WeHoTV YouTube Channel at https://youtu.be/ybKFa2X6RB8.

West Hollywood residents and businesses are served by two water utility companies: Beverly Hills Public Works and the Los Angeles Department of Water and Power (LADWP). Both utility companies are urging customers to cut back water usage. For more information about water conservation — including tips and links — please visit www.weho.org/waterconservation.