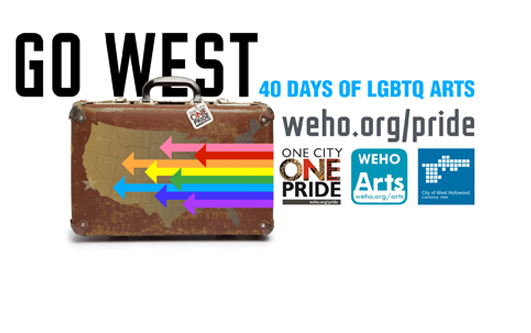 Each year, the City of West Hollywood celebrates the artistic contributions of the LGBTQ community with its vibrant One City One Pride LGBTQ Arts Festival. The festival runs for 40 days, from Harvey Milk Day, Monday, May 22, 2017 through Friday, June 30, 2017, which marks the end of Pride month.

With the theme of “Go West,” this year’s One City One Pride festival explores the idea of an LGBTQ West Coast utopia — with the freedom to live lives openly in San Francisco, Los Angeles, and the emerging, influential young City of West Hollywood — that has resulted in people moving West over the years.

The 2017 One City One Pride festival kicks off on Monday, May 22, 2017 with an artist-led protest sign-making workshop in preparation for the #ResistMarch (which is organized by Christopher Street West/LA Pride and will take place on Sunday, June 11, 2017 during Pride weekend). The workshop will be held from 5 p.m. to 9 p.m. at The Chapel at The Abbey, located at 696 N. Robertson Boulevard. All supplies for making protest signs and pins will be provided. The event is free to attend; RSVPs are not necessary.

Additional highlights of the 40-day festival include:

1)  Lesbians to Watch Out For: ’90s L.A. Activism, opening reception will be held on Friday, June 2, 2017 from 7 p.m. to 9 p.m. at Plummer Park’s Long Hall, located at 7377 Santa Monica Boulevard. The exhibit, which tells the stories of L.A. queer women from groups such as ACT UP LA, Queer Nation LA, Dyke March LA, the United Lesbians of African Heritage, Los Angeles Asian Pacific Islander Sisters, Lesbianas Unidas, and other organizations, will be on view through Friday, June 30, 2017.  The exhibit also features The Lesbian Avengers: 25th Anniversary traveling exhibition.

2)  One City One Pride Day of History on Saturday, June 3, 2017, at locations within the West Hollywood Library, located at 625 N. San Vicente Boulevard, and around the City of West Hollywood. Day of History events include Drag Queen Storytime with children’s stories and crafts, at 11 a.m. at the West Hollywood Library Community Meeting Room; Stuart Timmons’ LGBTQ History Tour, a 90- to 120-minute walking and riding tour which was originally written by the late Stuart Timmons, staged as a performance art piece with a cast of colorful characters representing different eras and historically important moments in West Hollywood’s LGBTQ history stationed along the route, with shuttles departing from the City of West Hollywood’s Council Chambers/Public Meeting Room every 15 minutes from 11 a.m. to 1 p.m.; and a screening of Reel in the Closet, a feature-length documentary that takes a look at queer people from the past through rare home movies dating as far back as the 1920s at 5 p.m. in the City of West Hollywood’s Council Chambers/Public Meeting Room.

3)  Hollywood Fringe / One City One Pride — The Hollywood Fringe Festival, which runs from Thursday, June 8, 2017 through Sunday, June 25, 2017 is an open and uncensored community-derived theatre event. Through a special collaboration with the City of West Hollywood, the Fringe’s western border extends into West Hollywood with LGBTQ shows taking place throughout the city as part of the One City One Pride festival. Times, dates, locations, and ticket prices vary. Visit www.hollywoodfringe.org/weho_2017 for details.

4)  Migration of the Monarchs, a three-part conceptual art project involving wearable art that transforms over the month by trans artist Yozmit, will take place in three parts over June, beginning on Saturday, June 3, 2017 at West Hollywood Park, located at 647 N. San Vicente Boulevard, where Yozmit will stage part one, TOTEM, from 11 a.m. to 3 p.m. On Friday, June 9, 2017 from 7 p.m. to 9 p.m., the piece will continue with WALK as live ambient art on Santa Monica Boulevard between Robertson and San Vicente Boulevards.  The piece culminates with three performances that merge burlesque and cabaret with Victorian esthetics, Butoh, Kabuki and Pansori during the Hollywood Fringe Festival. Visit www.hollywoodfringe.org/weho_2017 for details.

5)  The opening reception for the 10th Annual Los Angeles Art Association (LAAA) Out There group exhibition, which asks dozens of artists to examine West Hollywood’s commitment to the LGBTQ community will be held on Friday, June 9, 2017 from 6 p.m. to 9 p.m. at Gallery 825, located at 825 N. La Cienega Boulevard, in Los Angeles. The exhibit will be on view through Sunday, June 18, 2017. Admission is free and open to the public from 10 a.m. to 5 p.m. every day except Monday, June 12, 2017.

6)  The world premiere of Jeanne Cordova: Butches, Lies, and Feminism, a new documentary on the life and accomplishments of activist and author Jeanne Cordova, directed by Gregorio Davila, will screen on Thursday, June 29, 2017 at 7:30 p.m. at the  City of West Hollywood’s Council Chambers/Public Meeting Room, located at 625 N. San Vicente Boulevard.  The screening will be followed by a discussion with Davila and Cordova’s partner, Lynn Harris Ballen.

The One City One Pride LGBTQ Arts Festival is organized by the City of West Hollywood’s WeHo Arts, with input from the City’s Lesbian & Gay Advisory Board, Transgender Advisory Board, and other community partners.

For additional details about the One City One Pride LGBTQ Arts Festival, including a full calendar of events with times and locations, please visit www.weho.org/pride. A full brochure of events is viewable at http://bit.ly/OneCityOnePride2017.