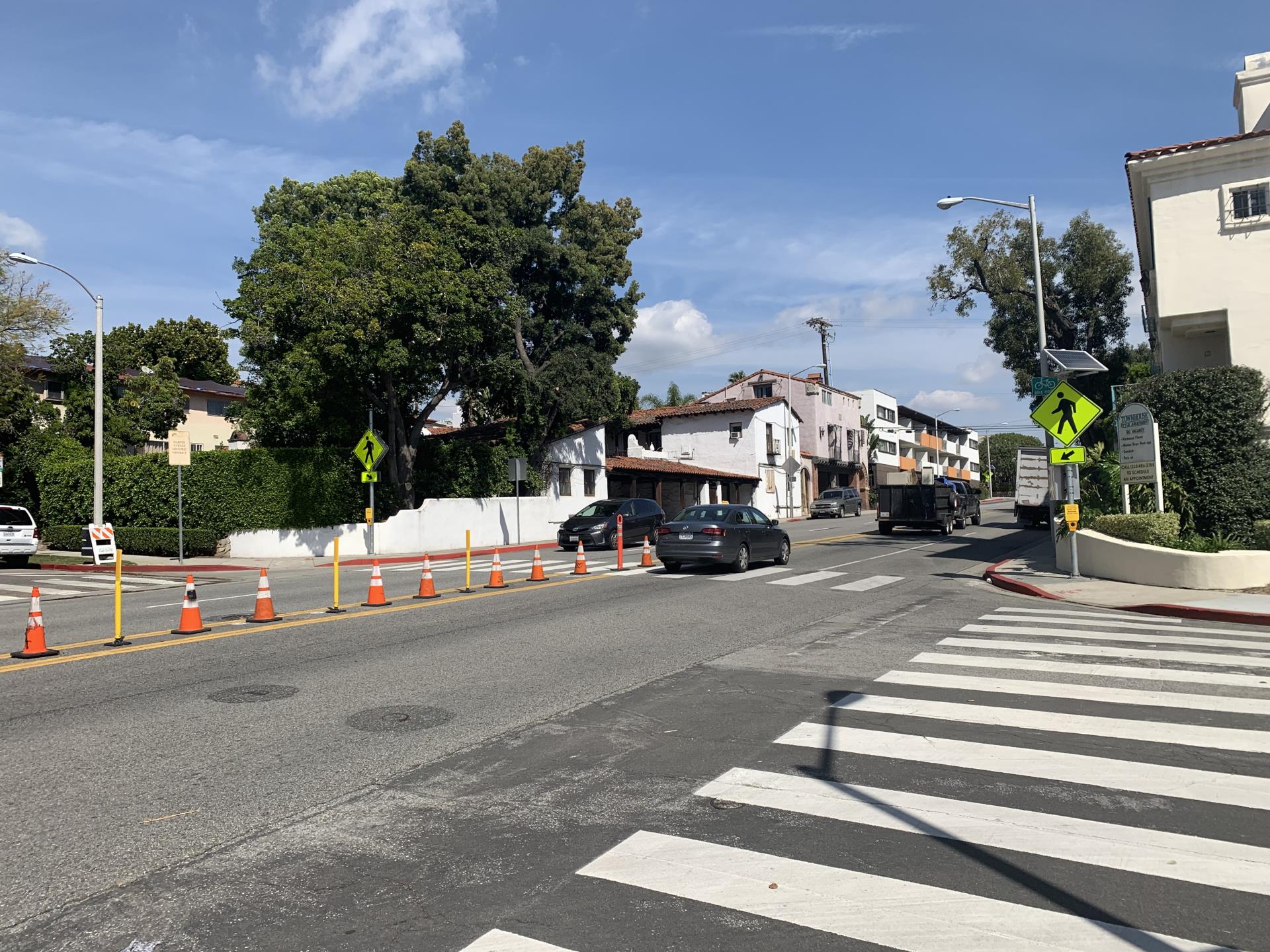 In March 2019, the City completed crosswalk improvements with new flashing pedestrian warning lights that assist pedestrians with visibility when using crosswalks and help stop traffic along Fountain Avenue for safe crossing. New lighting is installed on the edges of yellow diamond-shaped pedestrian warning signs and bright lights facing traffic lanes have been embedded in the roadway, which form a visual line along the perimeter of each crosswalk. Lighting is activated by push buttons located at poles along the curbside step-off points for each crosswalk and flashes rapidly during the duration of pedestrian crossing.

Additional safety treatments include bulb-outs at intersection corners to reduce crossing distances and enhance pedestrian safety, as well as selected right-turn-only signs in order to reduce potential conflict points. In addition, trailer-mounted Electronic Variable Message Signs have been placed at key locations within the City to encourage drivers to slow down and abide by posted speed limits. Speed radar feedback signs have also been installed near Sweetzer Avenue, Fairfax Avenue, Gardner Street, and Detroit Street. The City will evaluate these new improvements to determine their effectiveness in reducing vehicle speeds and accident rates. Pending the results of the testing phase, the striped bulb-outs and refuge islands may be replaced with permanent concrete fixtures.

This crosswalk improvement effort is part of the City’s continuous commitment to explore a mix of measures to address safety. The constant movement of dense vehicular traffic and pedestrians in close proximity is an ongoing challenge not only in West Hollywood but in cities across the nation. These enhanced crosswalks join a variety of improvements as part of a comprehensive plan with three unique areas to improve pedestrian safety: Engineering, Enforcement, and Education.

In February 2019, the City’s contracted Parking Enforcement personnel began monitoring major intersections during commute hours and are issuing citations to drivers who block intersections or crosswalk areas. The aim is to help ease bottlenecks at intersections during rush-hour traffic and to increase pedestrian and bicyclist safety.

The City also installed several new signalized pedestrian crosswalks along Santa Monica Boulevard and has installed solar-powered radar speed indicator signs along major corridors in order to remind drivers to drive within the speed limit. Striping improvements were also made at the Fountain and La Brea Avenue intersection to improve traffic circulation and increase the length of the left turn pocket in the eastbound direction in order to accommodate more vehicles.

For additional information about the City’s engineering efforts to improve safety, please call the City of West Hollywood’s Department of Public Works at (323) 848-6375. For people who are Deaf or hard of hearing, please call TTY (323) 848-6496. For up-to-date news and events, follow the City of West Hollywood on social media @WeHoCity and sign up for news updates at www.weho.org/email.
Return to full list >>