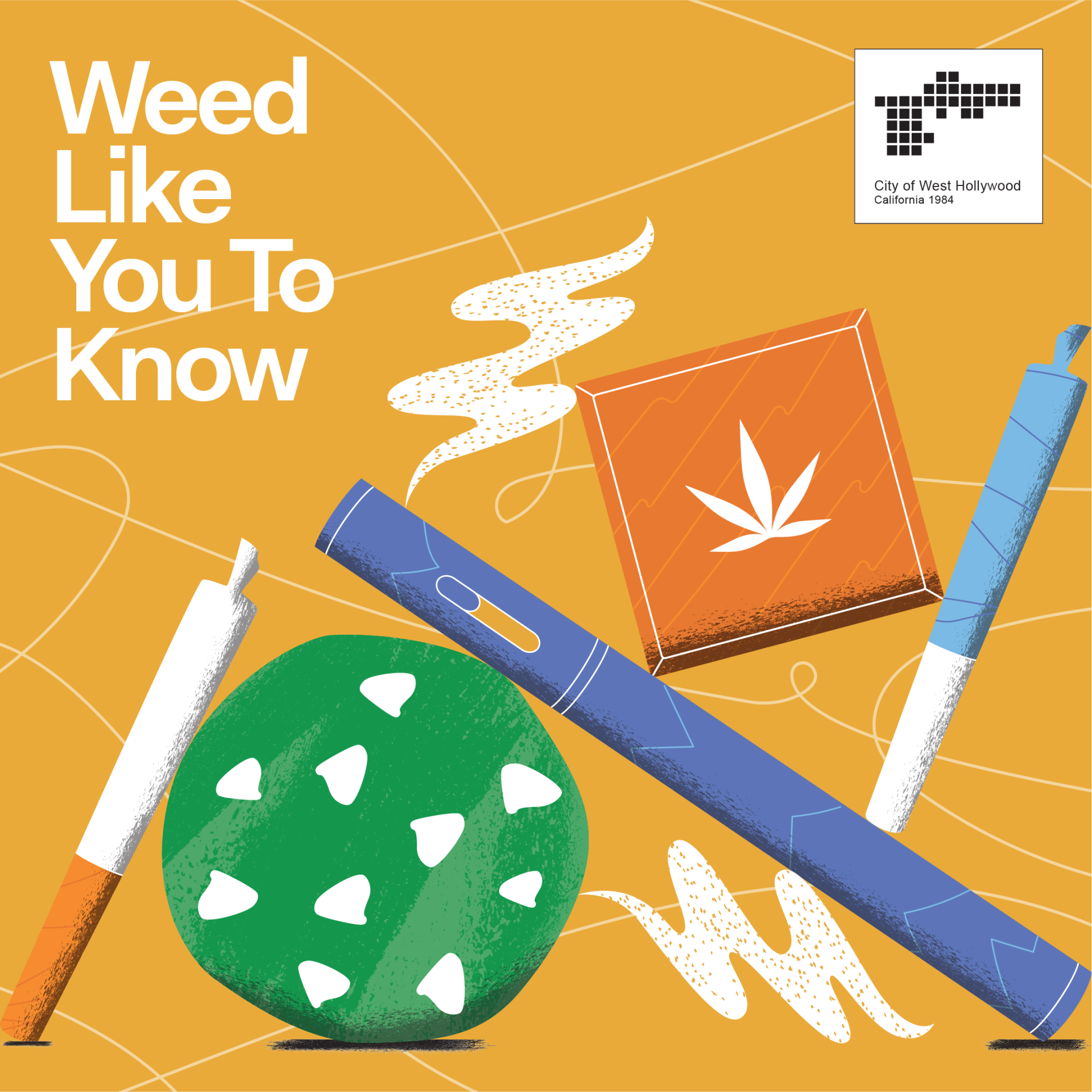 In order to raise awareness about laws regarding cannabis use, the City of West Hollywood is launching its Weed Like You To Know campaign, which rolls-out on Saturday, April 20, 2019 at 4:20 p.m. The effort will include printed and digital materials, such as informational postcards in dispensaries and neighborhood-serving businesses, as well as social media messaging and electronic advertising.

Weed Like You To Know messages remind community members that adult-use cannabis is legal in the City of West Hollywood, but that it can’t be consumed everywhere. Materials highlight the City’s support of legal cannabis consumption while also serving to clarify laws regarding consumption in public, smoking patios, and edibles. The aim is to remind consumers that using cannabis in public and at bars and restaurants isn’t permitted; consumption is only permitted at appropriate locations. Weed Like You To Know informational cards note the following:

The launch of Weed Like You To Know includes the release of WeHoTV video Public Service Announcement (PSA) called “Recreational Reefer Madness,” which strikes a parody tone and uses a campy and over-the-top old-timey newsreel style to inform, educate, and entertain the viewing audience while making certain those who consume understand the laws surrounding cannabis consumption. Watch the 90-second WeHoTV PSA here: https://youtu.be/lyEqfJ7PuRc

The City of West Hollywood is poised to become an international trend-setter with new interpretations and realizations of cannabis culture. The City of West Hollywood passed its Ordinance to regulate cannabis business and land uses in November 2017 and in April 2018 the City Council approved amendments to the Ordinance. In December 2018, after an extensive process, the City of West Hollywood announced its top-scoring cannabis applications in five unique business license categories. The visions expressed among the applicants reflect an entirely new era of integrated marketplaces, consumption lounges and cafes, immersive experiences, and product delivery — all of which go far beyond current models of Medical Dispensary and Adult-Use Retail sales.

The City of West Hollywood has issued Temporary Use Permits (TUPs) to four existing Medical-Use Dispensaries, which authorize Adult-Use Retail sales at their current locations on a temporary basis through the end of 2019.

For more information regarding cannabis in the City of West Hollywood, please visit www.weho.org/cannabis.

For more information, please contact John Leonard, Community and Legislative Affairs Manager for the City of West Hollywood, at (323) 848-6446 or at jleonard@weho.org. For people who are Deaf or hard of hearing, please call TTY (323) 848-6496. For up-to-date news and events, follow the City of West Hollywood on social media @WeHoCity and sign up for news updates at www.weho.org/email.
Return to full list >>