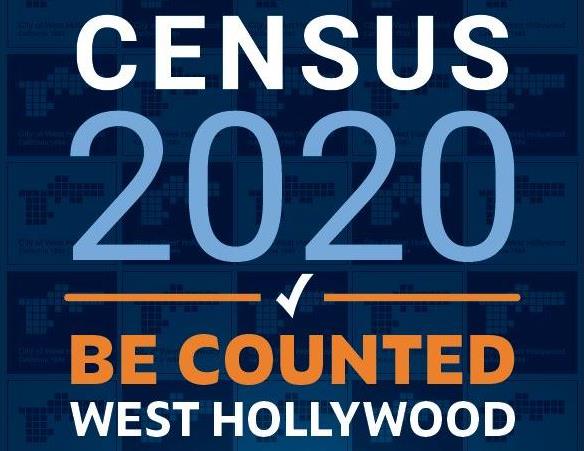 The City of West Hollywood, in April 2019, launched its year-long countdown to Census 2020, which will take place on April 1, 2020. The City’s efforts, “Be Counted West Hollywood,” will help to mobilize community members to take part in the upcoming census and will educate local residents and stakeholders about the importance of participating in the census and returning the questionnaire.

In September, the City of West Hollywood will launch its efforts to assemble a Complete Count Committee (CCC) and is inviting interested community members to apply to take part. The objective of the City’s CCC is to develop strategies for engaging hard-to-reach community members so that everyone in West Hollywood is counted. A complete count is vitally important; an incomplete count may lead to inaccurate population figures, which are used by federal and state governments to assign resources on a per-capita basis. As a community of just 1.9 square miles, the City of West Hollywood will work diligently to achieve a complete census count in Census 2020.

“The census provides critical information,” said West Hollywood Mayor John D’Amico. “A complete count will help to ensure that West Hollywood receives a fair share of federal funding and investments and, on a state level, the count will determine California’s apportionment in the U.S. House of Representatives. It’s so important that people in our community take part and be counted.”

Interested individuals may apply by filling out an application and returning it to the City of West Hollywood’s City Clerk’s office. The application and other relevant information can be found at www.weho.org/census2020 “Becoming a member of the CCC.” The City of West Hollywood’s Community and Legislative Affairs Division will assemble a review process that strives to ensure that the CCC embraces inclusivity and broad representation of the community and will make every effort to appoint individuals from diverse backgrounds, genders, sexual orientations, national origins, age ranges, abilities, and more.

The first meeting of the Complete Count Committee for the Census 2020 will take place on Wednesday, September 18, 2019 at 6:30 p.m. at the West Hollywood Community Center at Plummer Park, located at 7377 Santa Monica Boulevard in Rooms 1 and 2. The meeting is open to the public.

For more information, please contact Hernan Molina, Governmental Affairs Liaison at hmolina@weho.org or by calling at (323) 848-6364. For people who are Deaf or hard of hearing, please call TTY (323) 848-6496. For up-to-date news and events, follow the City of West Hollywood on social media @WeHoCity and sign up for news updates at www.weho.org/email.