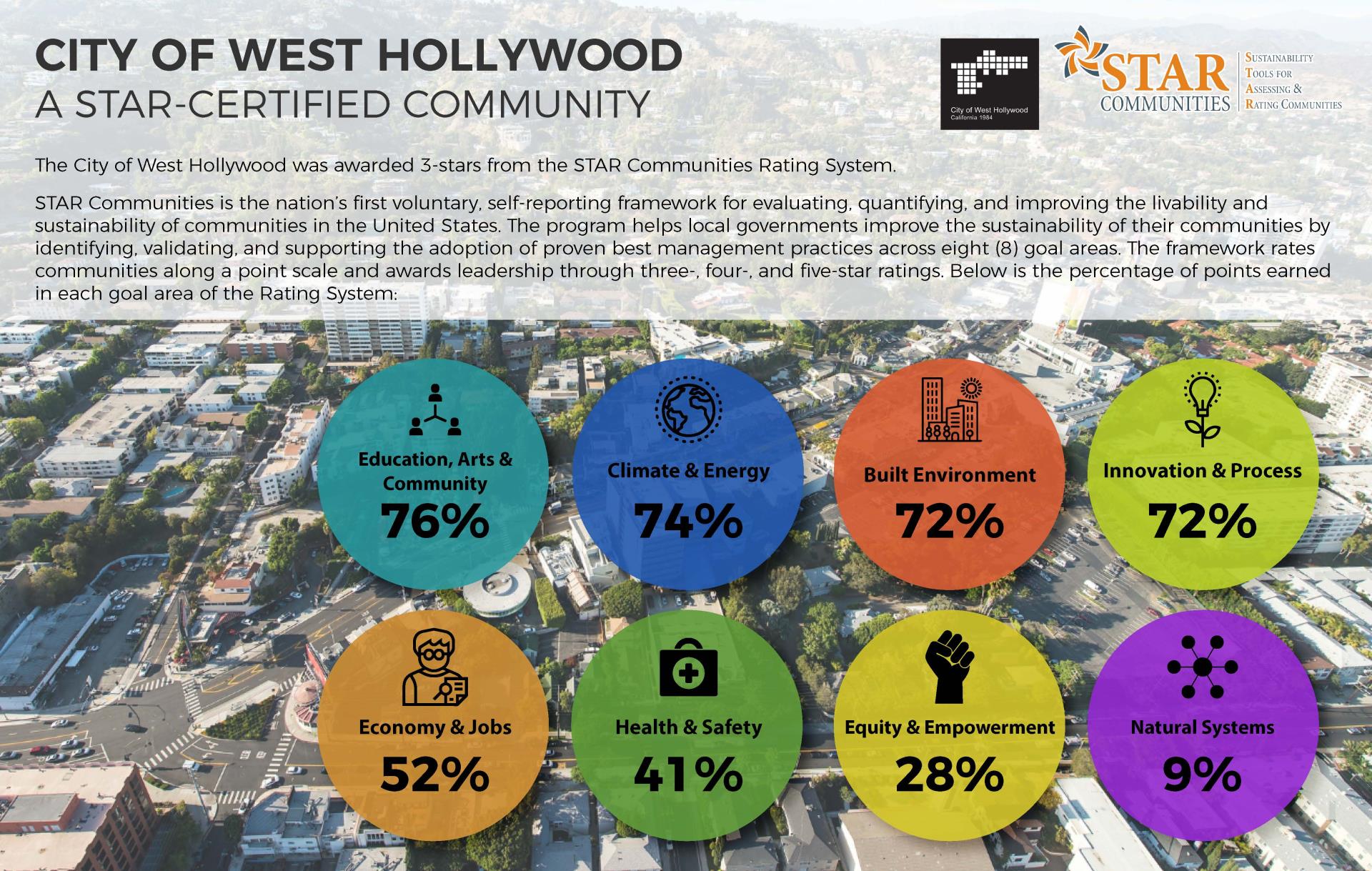 The City of West Hollywood has been recognized as a 3-STAR Certified Community by the STAR Communities Rating System (STAR). STAR is the nation’s leading framework and certification program for evaluating sustainability at the local level. This independent, third-party verification program has recognized the City’s commitment to providing a sustainable, resilient, and livable community. Certification places West Hollywood among the first ranks of sustainable communities nationwide; only three other California cities have earned STAR certification status.

Results from this certification process placed the City of West Hollywood well above the median score range needed to qualify for 3-STAR certified status. This strong outcome reflects the City’s robust leadership in sustainability efforts. West Hollywood’s STAR scores were highest in the category of Education, Arts & Community, and were followed closely by Climate & Energy; Built Environment; and Innovation & Process. Success in these areas stems from the City’s progressive policies, such as its Climate Action Plan, released in 2011, which quantifies greenhouse gas emissions (GHG), identifies action items to reduce impact, and has resulted in a more than 16.5% reduction in GHG emissions since adoption.

As part of its commitment to protecting the environment and building resiliency, the City in 2019 announced Clean Power Alliance as its new electricity provider and opted-in to 100% Green Power, which provides 100% renewable energy as the default option for the community. Other efforts that contributed to certification include programming and policies such as the City’s Arts programs, Green Building Program, Housing policies, Aging in Place / Aging in Community plan, Smart City Initiative, and innovative approaches to community engagement.

The City will use results from STAR certification to strengthen ongoing sustainability efforts, determine the focus for future initiatives, integrate best practices into ongoing operations, and track progress over time.

For additional information regarding the City of West Hollywood’s STAR Certification, please visit www.weho.org/city-government/city-departments/planning-and-development-services/star-communities-certification. Detailed information and helpful resources about sustainability are available on the City of West Hollywood’s website at www.weho.org/gogreen.

For more information, please contact Robyn Eason, the City of West Hollywood’s Senior Sustainability Planner, at (323) 848-6558 or at reason@weho.org. For people who are Deaf or hard of hearing, please call TTY (323) 848-6496. For up-to-date news and events, follow the City of West Hollywood on social media @WeHoCity and sign up for news updates at www.weho.org/email.
Return to full list >>