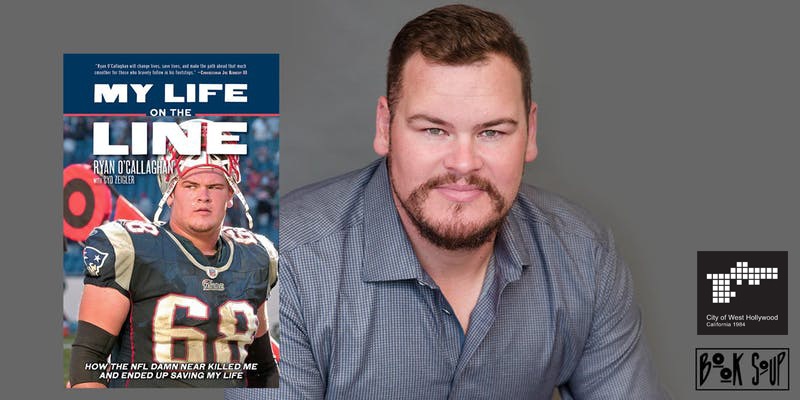 The City of West Hollywood and Book Soup invite community members to a WeHo Reads event featuring the new book, My Life on the Line: How the NFL D*mn Near Killed Me, and Ended Up Saving My Life, by former NFL player Ryan O’Callaghan.

The event will take place on Wednesday, November 13, 2019 at 7 p.m. at the City of West Hollywood’s Council Chambers/Public Meeting Room at West Hollywood Library, located at 625 N. San Vicente Boulevard. The event will include an author’s talk with co-author Cyd Ziegler, co-founder of Outsports.com. There will also be a book-signing at the conclusion of the conversation. Tickets ($0-$30) are available at www.eventbrite.com/e/an-evening-with-ryan-ocallaghan-tickets-74314700269.

Ryan O’Callaghan’s plan was always to play football and then, when his career was over, kill himself. Growing up in a politically conservative corner of California, the not-so-subtle messages he heard as a young man from his family and from TV and film routinely equated being gay with disease and death. Letting people in on the darkest secret he kept buried inside was not an option: better death with a secret than life as a gay man. As a kid, O’Callaghan never envisioned just how far his football career would take him. He was recruited by the University of California, Berkeley, where he spent five seasons, playing alongside his friend Aaron Rodgers. Then it was on to the NFL for stints with the almost-undefeated New England Patriots and the often-defeated Kansas City Chiefs.

Bubbling under the surface of O’Callaghan’s entire NFL career was a collision course between his secret sexuality and his hidden drug use. When the league caught him smoking pot, he turned to NFL-sanctioned prescription painkillers that quickly sent his life into a tailspin. As injuries mounted and his daily intake of opioids reached a near-lethal level, he wrote his suicide note to his parents and plotted his death. Yet someone had been watching. A member of the Chiefs organization stepped in, recognizing the signs of drug addiction. O’Callaghan reluctantly sought psychological help, and it was there that he revealed his lifelong secret for the very first time. Nearing the twilight of his career, O’Callaghan faced the ultimate decision: end it all, or find out if his family and football friends could ever accept a gay man in their lives.

The City of West Hollywood’s WeHo Reads series will offer one additional program in 2019 — on Wednesday, December 11, 2019: Felice Picano will present Coming to Hollywood: 1935-2000 in Words and Pictures.

For additional information about these events, visit www.weho.org/wehoreads.