City Says Loud-and-Clear: ‘Don’t Drink (or Use) and Drive’ 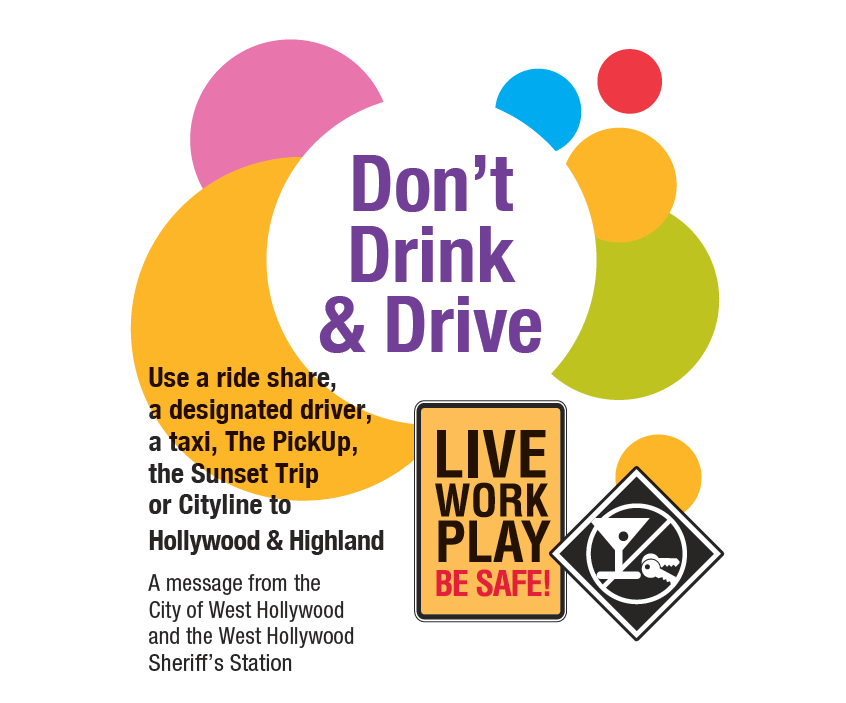 The City of West Hollywood, its City Council, and its Public Safety Commission will join the West Hollywood Sheriff’s Station, local Fire Stations 7 and 8, and Block by Block Security Ambassadors in reminding community members about an important message of safety during the holidays: do not drink and drive. Driving under the influence of cannabis carries the same DUI designation as alcohol.

Immediately following the event, community members will be welcomed to join City of West Hollywood Officials and Sheriff's deputies to walk to nearby restaurants and bars to begin the distribution of 100,000 drink coasters with printed messages, which will remind patrons not to drink and drive and to instead choose a designated driver, a ride share service, or a local taxi company. The coasters will also feature telephone numbers for taxicab companies that serve West Hollywood.

The coasters also feature a transit link to information about the City of West Hollywood’s free weekend trolley services which include the The PickUp, the Sunset Trip, and newly expanded Saturday evening service on the Cityline shuttle, which connects to the Metro Red Line at Hollywood and Highland. These three alternatives are free and help to not only curb alcohol or cannabis impaired driving, but they also ease parking, and reduce traffic congestion. Visit www.weho.org/transit for additional information about these services.

The City of West Hollywood has also produced two Public Service Announcements (PSA) to encourage holiday revelers to utilize alternative forms of transportation if they partake in alcohol or adult-use cannabis consumption. The first is Grinch-themed “Don’t Drive Impaired” WeHoTV NewsByte. The second is the City and County Communications and Marketing Association national award of excellence-winning PSA Recreational Reefer Madness about the rules of cannabis consumption in West Hollywood based on the 1936 cult-classic of comically bad cinema, Reefer Madness.

While these PSAs are a comedic take on driving under the influence, there are sobering statistics available from the Centers for Disease Control (CDC) about the dangers of DUI: every day, 29 people in the United States die in motor vehicle crashes that involve an alcohol-impaired driver; more than one-million drivers are arrested yearly for driving under the influence of alcohol or narcotics; and, marijuana users were approximately 25 percent more likely to be involved in a crash than drivers with no evidence of marijuana use.

The City of West Hollywood has many bars, restaurants, lounges, nightclubs, and venues that serve alcohol. The City is dedicated to encouraging social responsibility and maintaining safe establishments that are free from overconsumption of alcohol.