Join us live as the City of West Hollywood swears-in Mayor Lindsey P. Horvath and Mayor Pro Tempore John Heilman on Monday, May 18, 2020 at 5:30 p.m. An Oath of Office ceremony will be administered during the City of West Hollywood’s 2020 City Council Reorganization and Installation meeting, which will take place in a virtual teleconference format.

The meeting will be live-streamed on the City website at www.weho.org/wehotv and at www.youtube.com/wehotv. The meeting will also be available on streaming services such as AndroidTV, AppleTV, FireTV, and Roku; as well as through broadcasts on Spectrum channel 10 in West Hollywood and AT&T U-verse channel 99 throughout Southern California.

Mayor Horvath’s Oath of Office will be administered by a special guest; Mayor Pro Tempore Heilman’s Oath of Office will be administered by West Hollywood City Clerk Yvonne Quarker. The Pledge of Allegiance will be led by Rumi Nazemian. Openly gay country music singer/songwriter Chely Wright will perform the national anthem. There will be video presentations from former presidential candidate Pete Buttigieg and V. (formerly known as Eve Ensler, the writer of The Vagina Monologues). The regularly scheduled City Council meeting will follow the installation, and a live DJ set by DJ Asha will conclude the evening.

Community members may view the agenda by visiting the City’s website at www.weho.org/wehotv. Members of the public wishing to provide public comment on agenda items are welcome to do so in the following two ways: 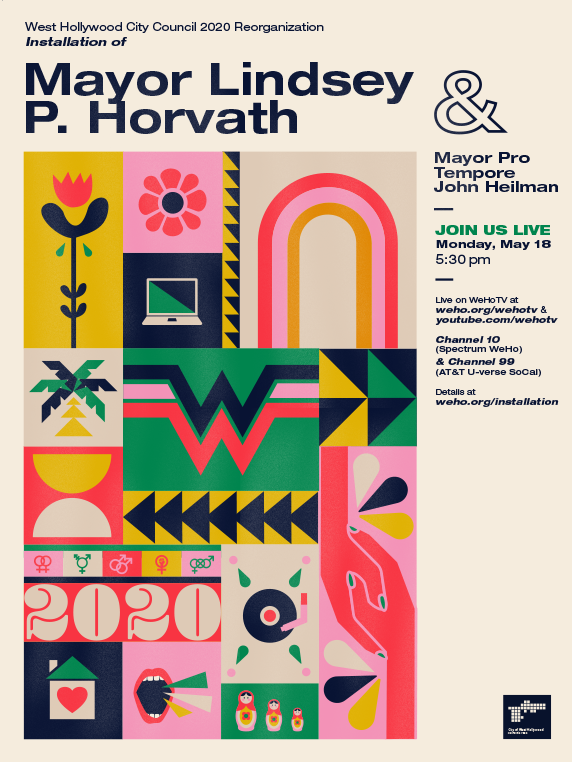