More than thirty years ago, in 1984, Cityhood was proposed by an unlikely coalition of LGBT activists, seniors, and renters — these groups came together to form a City like no other with progressive policies and strong tenants’ rights protections. Through tireless determination, the City of West Hollywood was officially incorporated as an independent City on November 29, 1984. Previously, West Hollywood had been an unincorporated section of Los Angeles County.

Saturday, November 29, 2014, marked 30 years as a municipality. The City celebrated its 30th anniversary with events throughout 2014 and 2015, which incorporated themes of the City’s past, present, and future. 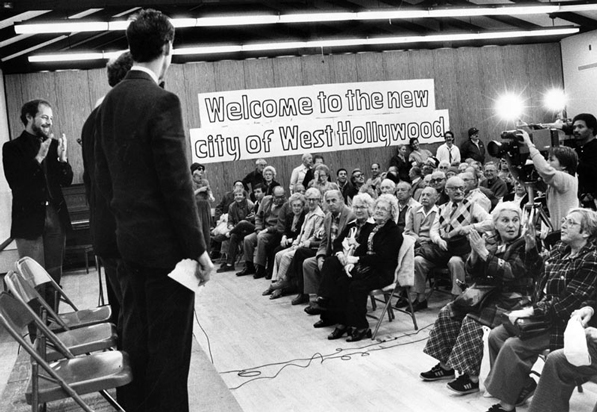 West Hollywood residents celebrate cityhood at a Nov. 25, 1984 meeting of the Coalition for Economic Survival, which led the incorporation effort on behalf of renters. Courtesy of the LA Public Library’s Herald-Examiner Collection.

During its more than three decades, West Hollywood has become one of the most influential small cities in the nation. No other city of its size has had a greater impact on the national progressive public policy agenda. West Hollywood’s story as a city includes countless individual and community stories.

Here are some highlights of the past 30+ years in West Hollywood:

While blazing a trail on progressive policy issues, the City of West Hollywood has also received high marks for sound general and fiscal management policies. The City, with its diverse revenue base, recovered more quickly from the 2008 recession than most cities in the nation and receives top ratings from agencies such as Standard & Poor’s (S&P). During the past five years, the City’s revenues have steadily increased and have now surpassed pre-recession revenue levels by 12 percent. The City has invested in a series of leading-edge Capital Projects, including the West Hollywood Park Master Plan. In 2011 the City celebrated the opening of the new LEED-rated West Hollywood Library to showcase the City’s rich intellectual, literary, and cultural diversity. A new Aquatic and Recreation Center is currently in design development.

In 2013, the City conducted a Community Study — one of the most intensive community engagement projects in the City’s history. The Community Study updated the City’s demographic data and provides information that informs funding priorities for social services initiatives. Ninety percent of respondents rated their quality of life as excellent or good, citing pedestrian orientation, central location, safe and quiet neighborhoods, amenities, and well-kept infrastructure.

The City is passionate about adopting fresh new ideas and the latest in technological advancement. At West Hollywood City Hall, staff members have formed an Innovation Catalyst Group (ICG), which explores the development and implementation of groundbreaking ideas. The City, through this group, has launched initiatives such as a monthly TEDx lunch series for City Hall staff members and has laid the groundwork for exciting new resources such as a Geographic Information Systems (GIS) initiative, an Open Data initiative, and a new web-based platform for civic engagement.

Over the last three decades, the City of West Hollywood has demonstrated that it is like no other city in the world. A strong spirit of community activism and civic pride thrives in the City. People from all over the globe experience its iconic destinations such as The Sunset Strip, Melrose Avenue, and historic Route 66.