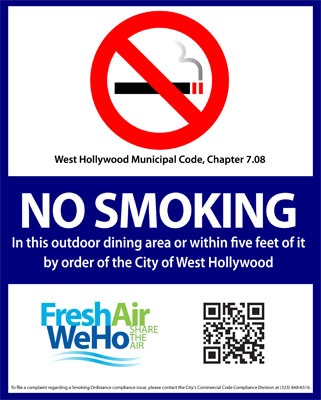 In an effort to promote good health and limit exposure to second hand smoke, the West Hollywood City Council has passed “An Ordinance of the City of West Hollywood Amending the West Hollywood Municipal Code to Prohibit Smoking in Outdoor Dining and Other Public Areas and Eliminate Existing Regulations that are Duplicative of State Law” (Smoking Ordinance).

Starting January 1, 2012 the Smoking Ordinance prohibits smoking within five (5) feet of outdoor areas including restaurant patios, cafes and food courts and outdoor common areas within the City of West Hollywood as well as provides smoking cessation programs and information to West Hollywood residents.

The major provisions of the proposed smoking ordinance include the following:

In addition, the smoking ordinance requires businesses to submit a Smoking Operations Plan for City review and approval outlining when and where smoking is allowed at a particular business and how and where signs will be erected identifying no smoking and smoking areas.

Secondhand smoke is a mixture of the smoke given off by the burning end of a cigarette, pipe or cigar and the smoke exhaled by smokers. Secondhand smoke exposes smokers and nonsmokers to more than 4,000 toxic substances, several of which are known to cause cancer in humans and animals. The U.S. Surgeon General warns that there is no safe level of exposure to secondhand smoke.

In December 2009, the City Council directed the City Attorney to draft a comprehensive ordinance prohibiting smoking in outdoor patios and open air spaces. The Council also directed the City Manager to convene a Task Force comprised of members of the community interested in participating in discussions about how the smoking ordinance should be structured and implemented. Beginning in early 2010, the Task Force met seven times and staff returned to the City Council twice for input as the smoking ordinance was being developed.

The West Hollywood City Council has historically taken a proactive approach on public health policies relating to tobacco use, by prohibiting smoking in public places and places of employment in 1986, and subsequently strengthened the ordinance with respect to employer/owner responsibilities and enforcement in 1999.