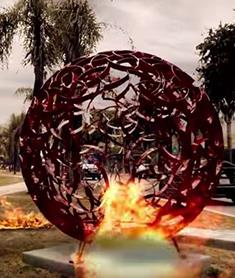 Every region of the state is affected by scarce supplies of water, but in Los Angeles County, conditions are particularly severe — the region has recently experienced one of the lowest amounts of rainfall on record. In January 2014, Governor Brown declared a drought State of Emergency and called on all Californians to voluntarily reduce water consumption by 20 percent. In April 2015, Governor Brown issued mandatory water restrictions for the first time in California history. The City of West Hollywood has, during the past two years, intensified efforts to use less water and to promote conservation.

The City has launched a water conservation campaign aimed at encouraging residents and businesses to make adjustments in their daily routines in order to conserve water.

The campaign features a 60-second public service announcement (PSA) video: Winter is Coming! But the Drought is Far From Over. Designed as a mock TV-series preview trailer, the video is based on the hit HBO series Game of Thrones. The one-minute experience takes audiences on a dramatic journey — instead of traveling through the mythical land of Westeros, viewers travel on a storybook tour of what a fictional West Hollywood may look like if the drought continues.

The video has been released in partnership with Change the Course, a first-of-its-kind water sustainability campaign that leverages its partners — Participant Media, National Geographic Society, and the Bonneville Environmental Foundation — to engage communities in understanding how daily choices affect our water footprint and to inspire people to take action in their own lives and pledge to conserve water. Viewers of the video will have the opportunity to take the free pledge of support and #changethecourse via text-message (text WEHO to 77177) to restore 1,000 gallons of water to endangered rivers.

The campaign also features a comprehensive advertising and social media effort called Keep it Dirty, which features provocative imagery — a soapy stud, a burly beefcake, a little red dress, and stilettos in the driver’s seat. Each creative comes complete with a suggestive water conservation message. Advertising will be featured in local print and online publications and on transit-shelter ads located throughout the City of West Hollywood. The City will promote Keep it Dirty water-conservation messages on social media, as well.

The campaign features four distinct ads that encourage people to use less water and #bethesolution: 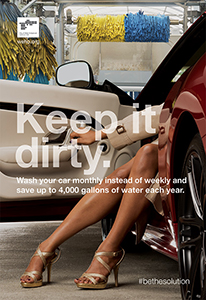 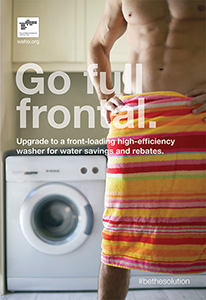 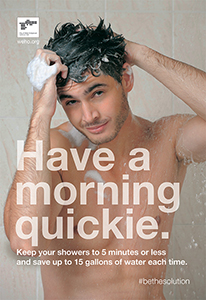 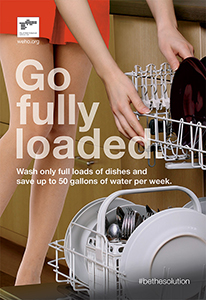 The California Department of Water Resources estimates that California would need much more rainfall to replenish its 12 major reservoirs and bring an end to the drought. Currently, the major state reservoirs stand at 54 percent of total average storage. The National Aeronautics and Space Administration (NASA) estimates California needs 11 trillion gallons of water to recover from the drought.

Water conservation tips and information about rebate programs are available at the following websites:

Sweep, Don’t Hose — Use a broom to sweep sidewalks and pathways instead of using a hose to wash down these areas. When washing cars, use a bucket and remember to never leave a hose running. Use a hand-held hose equipped with a shut-off nozzle for quick rinses. As an alternative, take your car to a commercial car wash; car washes recycle wash water. Please remember that hosing water on sidewalks, driveways, parking areas, tennis courts, patios or other paved areas, except to alleviate immediate fire, sanitation or health hazards is not allowed in the City of West Hollywood.

Use Water-Efficient Fixtures and Appliances — Connect low-flow showerheads and use aerators on faucets to save water. Install a high-efficiency toilet. When doing laundry, use the washing machine only for full loads to save water and energy. Install a water-conserving dishwasher and run it only when it is full. When washing dishes by hand, do not let water run.

Check Sprinklers and Don’t Overwater — Water early in the morning or later in the evening when temperatures are cooler to reduce evaporation. Make sure sprinkler heads are functioning properly and ensure there are no leaks in irrigation systems. Switch to drip irrigation to reduce water use.

Save Our Water - Save Our Water is a statewide program aimed at helping Californians reduce their everyday water use. Created in 2009 as a partnership between the Association of California Water Agencies and the California Department of Water Resources, the program offers ideas and inspiration for permanently reducing water use – regardless of whether California is in a drought.