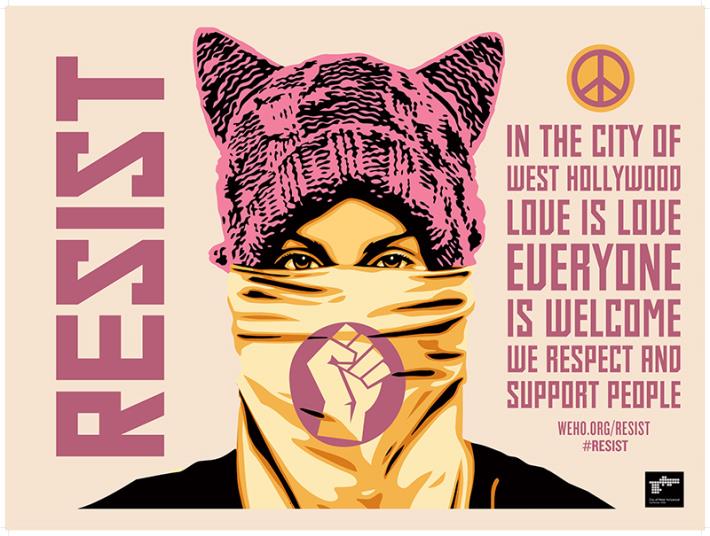 In the City of West Hollywood, We #RESIST

The City of West Hollywood works diligently to defend the fundamental rights of its community members including LGBT people, people with disabilities, seniors, people of color, immigrants, women, and others. Our city is one of the most outspoken advocates anywhere for the legal rights of LGBT people; more than 40 percent of residents in West Hollywood identify as LGBT. We also pride ourselves on being a safe space for all, regardless of nationality or immigration status.  The City has a commitment to promoting social justice and equal rights.

In 1984, Cityhood was proposed by an unlikely coalition of LGBT activists, seniors, and renters — these groups came together to form a City like no other with progressive policies and strong tenants’ rights protections. Through tireless determination, the City of West Hollywood was officially incorporated as an independent City on November 29, 1984. Previously, West Hollywood had been an unincorporated section of Los Angeles County. During its more than three decades, West Hollywood has become one of the most influential small cities in the nation. No other city of its size has had a greater impact on the national progressive public policy agenda. West Hollywood’s story as a city includes countless individual and community stories. Read highlights from the city of West Hollywood’s history.

In 2019, the City of West Hollywood added another first as votes in state legislatures took aim at reproductive freedom amounting to an assault on access to women’s health, reproductive care, and abortion services. The City passed a Resolution  making it the first city in the nation to impose financial sanctions and take action against states that have enacted extreme anti-choice legislation.

In 2017, the West Hollywood City Council approved a Resolution that calls on the U.S. House of Representatives to initiate proceedings for the impeachment of President Donald J. Trump. This came as a response to numerous violations of the Emoluments Clause of the United States Constitution, multiple violations of federal law as it relates to the employment of relatives, serious national security concerns resulting from potential interference with federal elections in 2016, and amid investigations of obstruction of justice.

The City of West Hollywood joined cities across the nation, including the California cities of Los Angeles, Oakland, Berkeley, Alameda, and Richmond; as well as the Massachusetts cities of Brookline, Cambridge, Amherst, Pelham, and Leverett; in calling for the initiation of impeachment proceedings. Although local municipalities have no authority over any action that the United States Congress may take, local Resolutions are a call for Congress to take the first steps toward impeachment proceedings.

The City of West Hollywood is among 34 cities and counties urging a federal judge to block President Trump’s “Sanctuary Cities” Executive Order, signed in January 2018, which would punish localities that do not assist federal immigration enforcement. The amicus brief filed in support of Santa Clara County’s lawsuit against President Trump argues that President Trump’s threat to withhold federal funds from “sanctuary jurisdictions” is unconstitutional.

The City of West Hollywood has also signed on to the Mayors’ Compact to Combat Hate. The initiative is led by the Anti-Defamation League and The United States Conference of Mayors and is aimed at fighting extremism and bigotry, and promoting the fundamental principles of justice and equality that define the United States of America.