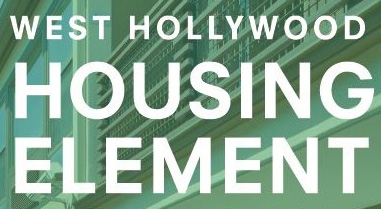 The Housing Element is a policy guide that provides an indication of the need for housing in the community, particularly the  availability, affordability, and adequacy of housing, and serves as a strategy to address housing needs across the economic and social spectrum.

Cities and counties are required by law to update their housing elements every eight years. Although the City of West Hollywood recently adopted Housing Element 2008-2014 in September 2011, as part of General Plan 2035, it must now adopt an updated housing element for the next housing element cycle.  The next cycle covers the period of October 31, 2013 through October 31, 2021.

The new 2013-2021 Housing Element was adopted unanimously by the West Hollywood City Council on December 2, 2013 and was approved by the California Housing and Community Development Department on January 14, 2014.

Census information for the City of West Hollywood can be accessed through this link. The Census Bureau's mission is to serve as the leading source of quality data about the nation's people and economy. We honor privacy, protect confidentiality, share our expertise globally, and conduct our work openly. We are guided on this mission by scientific objectivity, our strong and capable workforce, our devotion to research-based innovation, and our abiding commitment to our customers.