‘WeHo@30: Young City, Vibrant Heritage’ is part of ‘WeHo@30’, a series of arts and culture projects celebrating West Hollywood’s 30th Anniversary of Cityhood, featuring photos taken by photographer Tony Coelho and was curated by Current & Historic Preservation and Arts & Economic Development staff of the City of West Hollywood with guidance from the Historic Preservation Commission.

Subsequently, as part of the WeHo@30 Film Festival: A Digital Time Capsule, the project was doubled in scope and turned into a mobile friendly GIS Map. Please view it here! http://arcg.is/1KXwL4S

West Hollywood’s heritage is a rich inheritance of traditions, attributes, and cultural resources. Architectural heritage includes much more than preserving, displaying, or restoring a collection of historic buildings. It is both tangible and intangible. Ideas, stories, and other elements of who we are and how we identify ourselves are essential to the understanding of our place.

Preserving West Hollywood’s architectural heritage is integral to the growth of West Hollywood. Designated historic properties embody great significance of the cultural and social fabric of the City. Through historic preservation, we are able to tell stories of times that preceded Cityhood and of people, events, and ideas that embrace the vibrancy of this young city.

Embracing West Hollywood’s architectural heritage is an important contemporary movement that is simultaneously local and specific, global and shared.

The City of West Hollywood invites you to take part in celebrating its 30 years of Cityhood through its architectural heritage as exhibited in this collection. The photographic exhibition represents a wide array of architectural styles and associations with well-known architects and builders. These images celebrate West Hollywood’s 30th anniversary and beyond – recognizing our past, present, and future.

The exhibit was on display from March 24 to mid-May 2015 at the West Hollywood Library located at 625 N. San Vicente Blvd during regular library hours (M--Th: 11am-7pm, Fri-Sat: 10am-6pm, closed Sundays). Admission is free and free validated parking is available in the one-story Library Parking Structure.

For more information on exhibits at the West Hollywood Library and other WeHo@30 projects, please visit www.weho.org/arts

Tony Coelho is a Los Angeles based photographer with an educational background in film and LGBT studies.  His works include photographing events for the City of West Hollywood, documenting queer arts and lifestyles, and capturing the urban landscape of Los Angeles. You can see more of his work at www.tonycoelhophotography.com 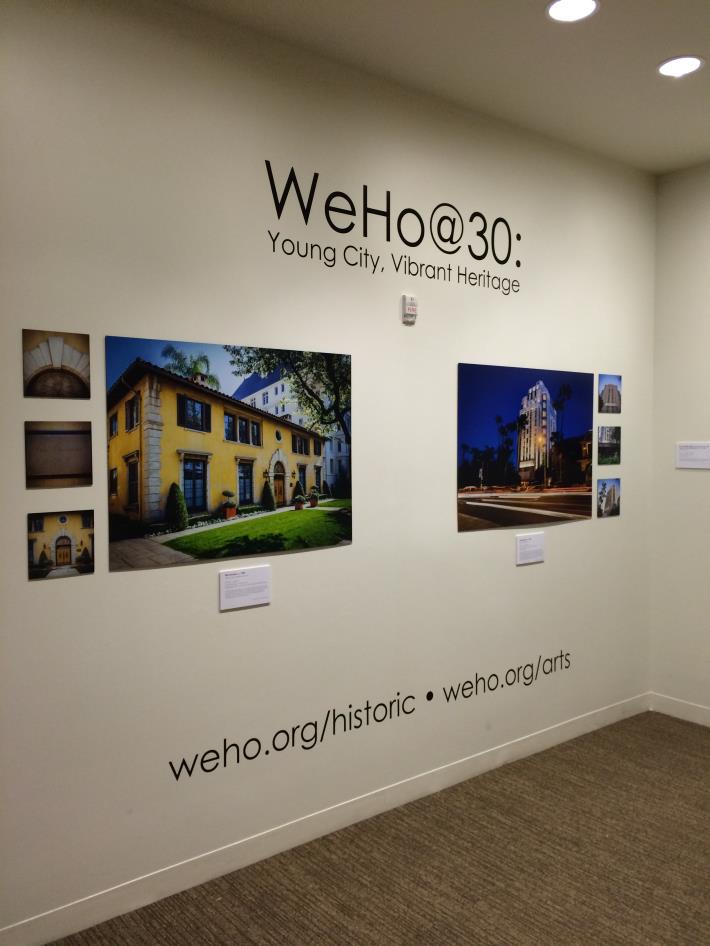 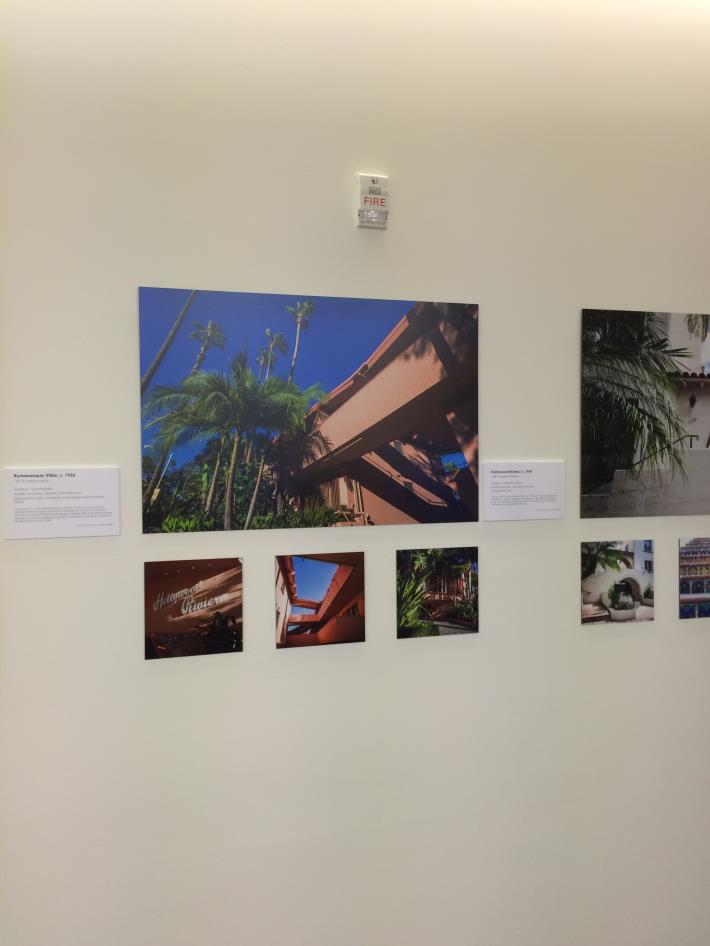 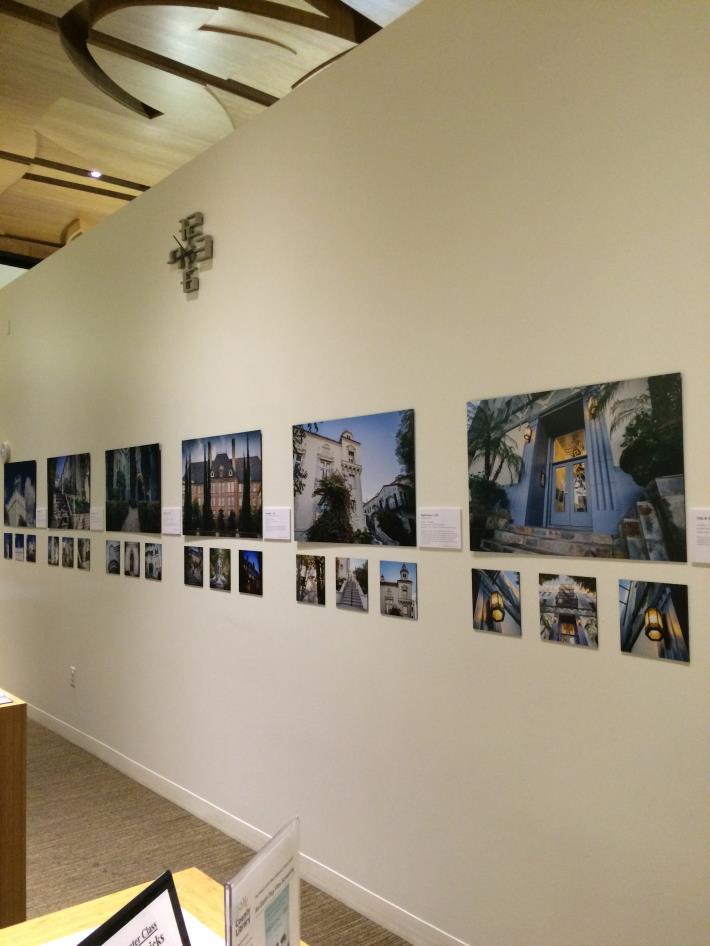 Quotes about historic preservation from the Historic Preservation Commission and Staff:

“Historic Preservation is a physical and experiential history lesson. It tells the story of the City and allows people to experience a time gone by...from worker cottages in the rail yards to the homes of those who made movies and created Hollywood as a state of mind. Those buildings will live on and will remain standing to allow future generations to see and feel the past.”

“Simply stated, preserving the past for others to understand and appreciate what came before is an important reason for historic preservation. And, in West Hollywood over the past 30 years it has served to document a changing city. Increased public awareness will help educate the community on the rich historical resources that exist within the city limits and how they may take stewardship in preserving the history of this built environment.”

“The importance of preservation stems from the deep connection that people feel with their surroundings, whether that connection be historical, familial, social, cultural, or experiential. The people, events, stories, connections, and experiences that are associated with historic resources are embedded in their makeup and presence.”

Properties included in this exhibit:

La Fontaine contributed to the growth of West Hollywood by providing luxurious, high-density multi-family living. The 1920s and 1930s saw the construction of a number of high-density buildings contrasted with low-density, single-family homes.

Designated in 1991, contributor to the Courtyard Thematic District

Originally built as a home and office space for noted architect Lloyd Wright, son of Frank Lloyd Wright, this property continues to be used as an office and studio. The home and studio is an exceptional example of Lloyd Wright’s success at combining wood-frame construction with concrete textile block. This particular concrete block pattern features an interlocking design of stylized Joshua trees.

The construction of 9231 Doheny Road coincided with the first major commercial developments on the Sunset Strip. The Streamline Moderne building was one of a few highly characteristic styles that defined the commercial landscape of West Hollywood in the mid- to late-1930s.

The four-story apartment building is one of the few remaining, intact examples of the Art Deco style in West Hollywood. The building incorporates detailing indicative of the style, such as vertical elements in repetitive patterns and chevrons.

The high-quality design for this building was presumed to appeal to members of the motion picture industry migrating to Hollywood from New York City in the 1920s and 1930s.

The increasing demand for housing that accompanied the rapid growth of the Los Angeles region in the 1920s and 1930s was well-served by the high density of the courtyard apartment. The incorporation of parking garages within the building also indicates the growing demand of the automobile.

Designated in 1992, contributor to the Harper Avenue Historic District

The presence of the growing motion picture industry encouraged the development of elegant apartment buildings that attracted Hollywood stars. The location of the property between Beverly Hills and Hollywood and adjacent to the developing Sunset Strip, created an increasingly attractive residential area in the 1920s.

Thought of as the “Architect to the Stars,” Edward H. Fickett designed this property as a modern oasis that would attract those seeking Hollywood living. The multi-family building stands as an excellent intact example of post-war courtyard apartment housing.

The Schindler House, now serving as the MAK Center for Art and Architecture, L.A.,

The building is constructed as a combination of masonry walls with light screen openings to private gardens and courts. The former residence was designed as a cooperative live/work space for two families.

The Tudor Revival buildings were designed as part of a complex of shops, restaurants and cottages named “English Village.” The development was part of the first sizeable commercial developments along the Sunset Strip that utilized the vista of Los Angeles to commercial advantage.

The Bekins Moving Van and Storage Company wanted to distinguish itself from competitors by constructing a grandiose building that exemplified their high standards of service. The faintly rusticated first story acts as a base to six stories of vertical Gothic spandrels. The rooftop Emser sign originally help the Bekins Storage sign.

Originally named the Sunset Tower and built as residences, in 1986 the St. James Club of London bought the building and converted it into a posh hotel, later becoming the Argyle. In 2005, the building returned to its original name and remains a hotel. The Sunset Tower is considered to be one of the finest examples of Art Deco architecture in the region. This was once the residence of many Hollywood celebrities, including John Wayne, Howard Hughes, Bugsy Siegel, Marilyn Monroe, and Frank Sinatra.

Architect S. Charles Lee was well-known for the movie theaters he designed throughout Los Angeles and incorporated many of the theatrical and period-revival styles he used in his theaters into his design of El Mirador.

Designated in 1991, contributor to the Plummer Park Apartment Grouping

This building is one of five that constitutes an unusual grouping of shared architectural style and form. The Plummer Park Apartment Grouping was constructed on parcels of land purchased from Col. Eugenio Plummer in 1929, which had been part of the original Rancho La Brea.

The Craftsman bungalow was popular in Southern California residential architecture from 1910 to the mid-1920s. The Arts and Crafts movement represents the first popular wave of modernist influence in American architecture. This single family residence is one of the most pristine examples of Craftsman style architecture in the City.

During their decade-long practice, Arthur and Nina Zwebell became well-known for their luxurious courtyard housing designs.

Courtyard housing in Southern California integrates the desire for individual housing and a common outdoor space within a higher density development.

Designated in 1992, contributor to the Harper Avenue Historic District and the Courtyard Thematic District

Designated in 1992, contributor to the Harper Avenue Historic District

The Harper Avenue District reflects significant patterns of growth and settlement in West Hollywood. The location of the district between Beverly Hills and Hollywood and adjacent to the developing Sunset Strip, made it an increasingly attractive residential area in the 1920s. The multi-family form and luxury of period revival styles were new to the West Hollywood community, which, until the 1920s, had been dominated with simple single-family development.