To walk down Sunset Strip in 1966 was to see a sidewalk thronging with groovy guys, Beatle-haired teens, and flower children.  One might have even caught a glimpse of Ed Ruscha riding in the back of his pickup taking pictures for his iconic art book ‘Every Building on the Sunset Strip’  or their favorite musician outside a local club. 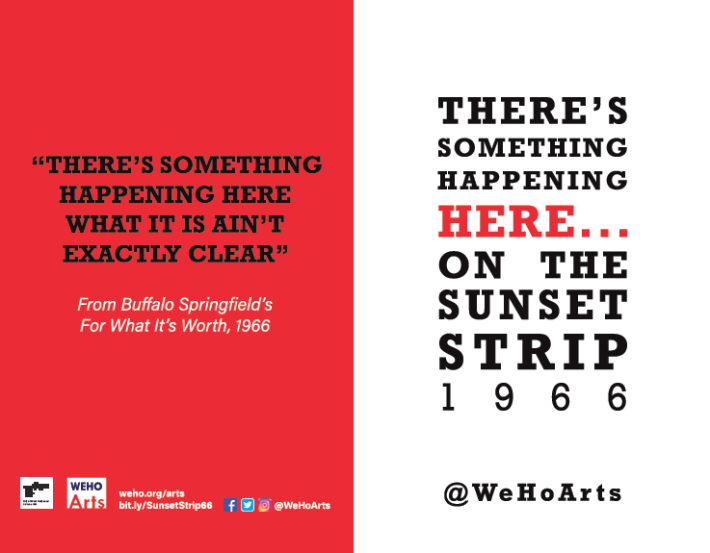 Nearby Laurel Canyon, in part because of its proximity to the clubs on the Strip, was home to many folk rock stars and became a legendary nexus of counterculture activity and attitudes in the 60s. Residents included Frank Zappa; Jim Morrison; Carole King; The Byrds; Buffalo Springfield; Canned Heat; John Mayall; members of the band The Eagles; the band Love; Crosby, Stills, Nash & Young; Joni Mitchell; and Micky Dolenz & Peter Tork of The Monkees. Lisa Robinson, in a Vanity Fair February 8, 2015 article writes, “some say the Laurel Canyon music scene began when Frank Zappa moved to the corner of Lookout Mountain and Laurel Canyon Boulevard in the late 1960s. Former Byrds bassist Chris Hillman recalls writing “So You Want to Be a Rock 'n' Roll Star” in Laurel Canyon in 1966 in his house… (and) The Doors' lead singer Jim Morrison reportedly wrote “Love Street” while living behind the Laurel Canyon Country Store.” 1 The song Our House (1970) was written by Graham Nash about the Laurel Canyon house Joni Mitchell lived in while they were dating, and Mitchell used the area as inspiration for her third album, Ladies of the Canyon (1970).

Photographer Henry Diltz (who co-founded Modern Folk Quartet) was also a resident of Laurel Canyon, and he used the canyon as backdrop for many of his historic photos of rock musicians casually socializing. Several of his photos became iconic representations of the 60s and 70s West Coast music scene and many others became famous album sleeve covers. Many teenagers came to the Strip to catch a glimpse of their favorite musicians, and (because with a few exceptions like the Fifth Estate coffeehouse and Pandora’s Box, an alcohol-free rock-club) they were not allowed inside most clubs, they used the sidewalks to hang out. Some businesses and residents were unhappy with the added traffic and crowds, and by late 1966, authorities began imposing a decades-old 10 pm curfew law for those under age 18.2 Seeing this as an infringement on their rights, ‘Striplings,’ as they were called, invited people to demonstrate at Pandora’s Box, a club just across the border from West Hollywood at the intersection of Crescent Heights and Sunset Boulevard. The LA Times reported that on November 12, 1966 as many as 1,000 youthful demonstrators, including such celebrities as Jack Nicholson and Peter Fonda, erupted in protest, although other sources report as many as 3,000 demonstrators.

As Cecilia Rasmussen wrote in an August 5, 2007 LA Times article, “the confrontation with police also inspired musician Stephen Stills to write "For What It's Worth," released two months later by Stills and the band he was in, Buffalo Springfield.

"Riot is a ridiculous name," he said in an interview. "It was a funeral for Pandora's Box. But it looked like a revolution."" 2

Stills’ song, with its famous line ‘There’s something happening here…’ debuted during a short-lived truce at Pandora’s Box on Christmas Day, and eventually became an anthem of the protest era.

Several more demonstrations took place over the next few nights and months. The County passed an emergency ordinance banning dancing by those under 21 in many clubs. 3 On February 11, 1967, organizers banded together with other groups that were facing police harassment and planned simultaneous demonstrations across LA. According to the LA Free Press, “one of the most interesting and pace-setting reactions to the call to demonstrate came early this week from homosexual organizations who are currently up in arms about New Years Eve’s police raids on a number of Silver Lake area gay bars.” Two leading gay groups, PRIDE and the Council on Religion and the Homosexual, endorsed the 11 February demonstration and planned a demonstration that predated the Stonewall riots by over 2 years with 500 people demonstrating outside the Black Cat Tavern in Silverlake.

Other February 11 demonstrations were planned in Chicano and Black communities in Watts, East L.A. and Pacoima, most of which were largely unsuccessful. As protests on the Strip began to identify with the far more deadly police brutality in South-Central LA, civil rights hero Julian Bond addressed a crowd at the Fifth Estate in March 1967 1

On February 22, 1967, a CAFF (Community Action for Facts and Freedom) benefit concert was held to raise money to pay for damages to businesses that suffered during the Sunset Strip Riots. Headliners Peter, Paul and Mary reminded the audience that the teenagers of the “Sunset Strip are not the first, nor the last, to have to fight to be individuals.” Fresh off the success of that concert, organizer Alan Pariser banded together with Ben Shapiro, Lou Adler, Derek Taylor, John Phillips, and Jim Dickson, set up shop on Sunset Boulevard, and organized an even bigger event which would be a pivotal moment in the 1967 Summer of Love, the Monterey Pop Festival. 4

Written by Mike Che, with assistance from Domenic Priore 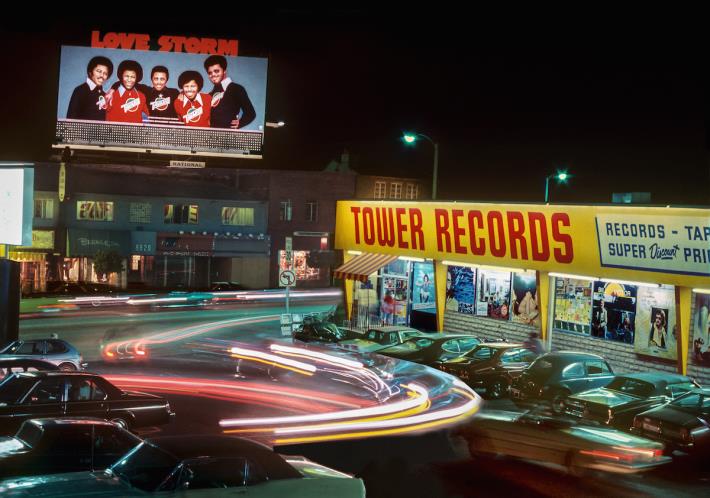 Revisit a time when hand-painted temporary billboards on the Sunset Strip depicted the world's greatest Classic Rock Stars. This exhibition is outside and is on view at all hours of the day at 8775 Sunset Blvd. from February, 2017- January, 2018. For more info click here. 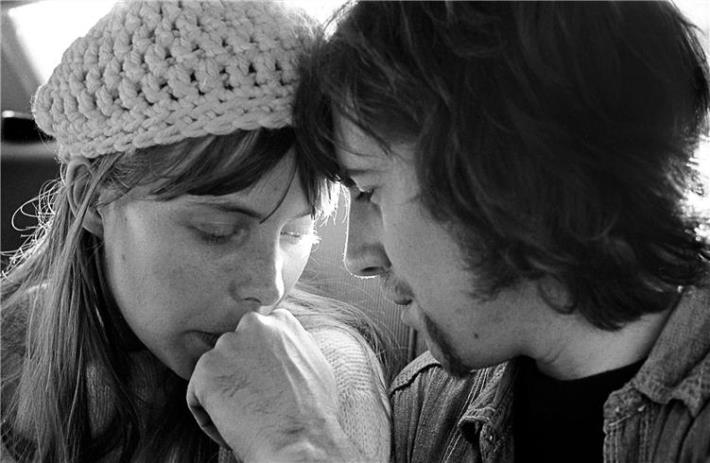 All events and exhibits are free to attend.

Join photographer Henry Diltz for a slideshow and talk in the City Council Chambers from 6:30pm -7:45pm, followed by a reception for the exhibit ‘There’s Something Happening Here…’ in the Library.

This talk covers that specific moment between 1965 and 1966 when West Hollywood absorbed, then advanced the folk music movement that had previously been harbored in Greenwich Village.  Presented by Domenic Priore, author of Riot on Sunset Strip: Rock 'n' Roll's Last Stand in Hollywood (2015 Jawbone Press, London).

As Far as You Can See . . . Sunset Strip through the Eyes of Poets

Join us for a reading of both original work and work by poets who captured a time we hold dear. Celebrate National Poetry Month and experience a rainbow of colors, emotions, and memories, through words that are certain to evoke your own electric visions!  Organized by Kim Dower, West Hollywood City Poet Laureate.

Photographer Robert Landau will present a slideshow of historic billboard images, along with colorful stories about their history and the counterculture era. For more info click here.

4. Sunset Strip c. 2000 (Sunset Strip tells the fictional story of a number of music industry artists, all in the span of 24 hours on the Sunset Strip in 1972). (trailer)

5. When You’re Strange: A Film About the Doors  (trailer)

6. Troubadours: Rise of the Singer-Songwriter (BBC Documentary about folk music at the Troubadour club in the 1960s. (trailer)

Here is a small sampling of sounds of the era available through the County of Los Angeles Public Library. With your library card number and PIN, you can download these songs for free.