The City of West Hollywood inaugurated its first City Poet Laureate during the regular City Council Meeting regular meeting on October 6, 2014. As part of the installation ceremony, Reigns read from his poem: “Morning, West Hollywood.” (Full text of the poem is below.)

Each City Poet Laureate will help promote the literary arts through writing workshops, panels, readings and by helping design the City's annual Poetry Month celebration each April. The best way to stay informed about our City Poet programs sign up for our bi-weekly WeHo Arts Briefs Newsletter. and visit our Poetry Month page to see a list of activities that took place in April 2016.

Steven was in conversation with Natalie Goldberg for the 30th anniversary of her bestselling book, Writing Down the Bones on June 30 during the City's 2016 One City One Pride festival. Steven Reigns will serve as City Poet Laureate from October 2014-2016.

For questions about the City Poet Laureate, please contact the program administrator, Mike Che at mche@weho.org.

Our current City Poet Laureate is Kim Dower. Read about her here!

past the Formosa Café where the ghosts

Light arcs over bakeries and grocers

a melting pot of generations and cultures.

Then sunrise finds The Sunset Strip,

from rock concerts and nightclubs,

to pass the day. Residents recall the beginning

of the plague before AIDS Project Los Angeles and Being Alive

stepped in to offer healing and hope.

the morning breeze, flaps alongside

symbols for our city and state.

remind with every step that diversity matters,

isn’t just tolerated but is honored.

The sun warms the library, the Design Centers,

the Recovery Center, the Melrose galleries, and the Troubadour

where Joni, Janis and James all played.

Sun moves past Doheny toward the Pacific.

Everyday we wake up, a brilliant and creative people

in a beautiful city, our past and present 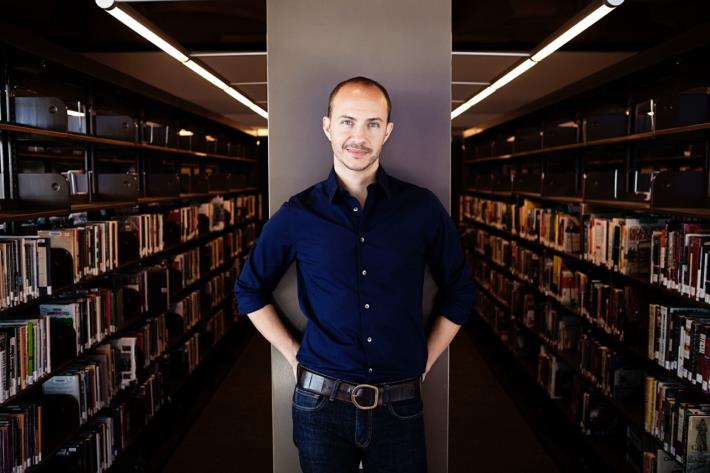 Steven Reigns grew up in St. Louis, Missouri, and has lived in the Norma Triangle neighborhood of West Hollywood for more than nine years. His debut poetry collection was published in 2001 and he has since published six chapbooks. He is a six-time recipient of an artist-in-residence grant from the Department of Cultural Affairs of the City of Los Angeles. Reigns organized and taught the first-ever autobiographical poetry workshop for LGBT seniors and edited an anthology of their writings, “My Life is Poetry.” He has taught writing workshops around the country to LGBTQ youth and people living with HIV. His latest poetry collection “Inheritance,” published by Sibling Rivalry Press, came out in 2011. For more info visit www.stevenreigns.com