For National Poetry Month 2017, Kim created a collaborative poem called I Sing The Body West Hollywood by soliciting lines from over 100 people in West Hollywood. The finished poster is available here. We also turned it into an animated video.

For National Poetry Month 2018, Kim repeated the process and weaved together the poem "West Hollywood is for Dreamers."

In October 2018, Kim Dower represented West Hollywood at the first ever statewide convening of Poet Laureates.

If you have questions about the West Hollywood City Poet Laureate program or would like a poster of 'West Hollywood is for Dreamers', you may contact the program manager, Mike Che, at mche@weho.org. 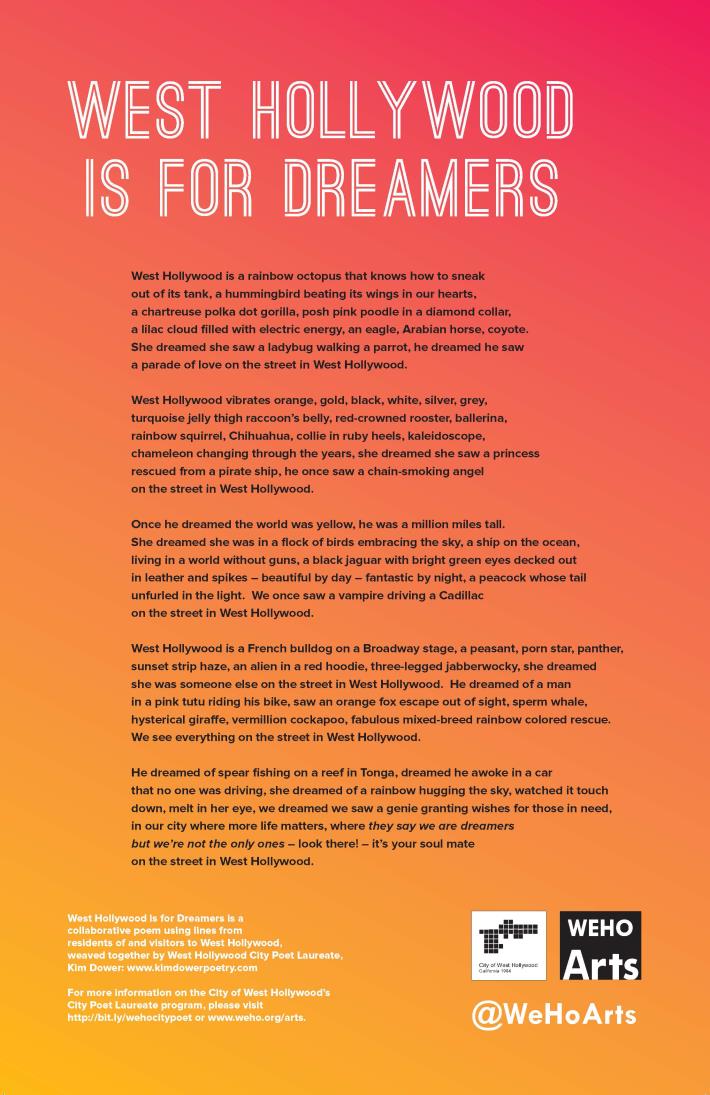 Kim Dower will receive an official proclamation for National Poetry Month, and read the new poem, "West Hollywood is for Dreamers"

Route 66 Through the Eyes of Poets

All Month look for the National Poetry Month Street Pole Banners and Bookmarks.

Other poetry activities sponsored by the City of West Hollywood's WeHo Arts program in April include:

Every weekend in April, Greenway Arts Alliance in association with Da Poetry Lounge presents THE 2ND ANNUAL LA GET DOWN FESTIVAL http://greenwaycourttheatre.org/2ndannualgetdown/

West Hollywood is for Dreamers

West Hollywood is a rainbow octopus that knows how to sneak

out of its tank, a hummingbird beating its wings in our hearts,

She dreamed she saw a ladybug walking a parrot, he dreamed he saw

a parade of love on the street in West Hollywood.

chameleon changing through the years, she dreamed she saw a princess

rescued from a pirate ship, he once saw a chain-smoking angel

Once he dreamed the world was yellow, he was a million miles tall.

She dreamed she was in a flock of birds embracing the sky, a ship on the ocean,

living in a world without guns, a black jaguar with bright green eyes decked out

in leather and spikes - beautiful by day – fantastic by night, a peacock whose tail

unfurled in the light.  We once saw a vampire driving a Cadillac

sunset strip haze, an alien in a red hoodie, three-legged jabberwocky, she dreamed

she was someone else on the street in West Hollywood.  He dreamed of a man

in a pink tutu riding his bike, saw an orange fox escape out of sight, sperm whale,

We see everything on the street in West Hollywood.

He dreamed of spear fishing on a reef in Tonga, dreamed he awoke in a car

that no one was driving, she dreamed of a rainbow hugging the sky, watched it touch

down, melt in her eye, we dreamed we saw a genie granting wishes for those in need,

in our city where more life matters, where they say we are dreamers

but we’re not the only ones – look there! -  it’s your soul mate

across Route 66 its finger tips reaching into Beverly Hills

Because the Italian Cypress trees poke holes into the sky

and the flags are waving Eight Miles High

in the Hollywood Hills a man steps onto his balcony

looks out at the galaxy of lights jewels scattered below

like smiles on fire Ode to West Hollywood because

the boys on Santa Monica kiss with their mouths open

the Blue Whale is watching because we eat at Barney’s

gives us a place to hide the tattooed goddesses slow grind

inside The Palms where bougainvillea blooms into a fuchsia blaze

without asking questions and gas lamps line the streets whispering

because “every single day someone tells us we have the best burgers in town,”

because my mother thought the firemen were hot because at dawn

our city his arms stretched pumped loaded the lights below

a feast of life dissolving the night and when he awakens

he hasn’t a clue why there are rose petals in his pocket. 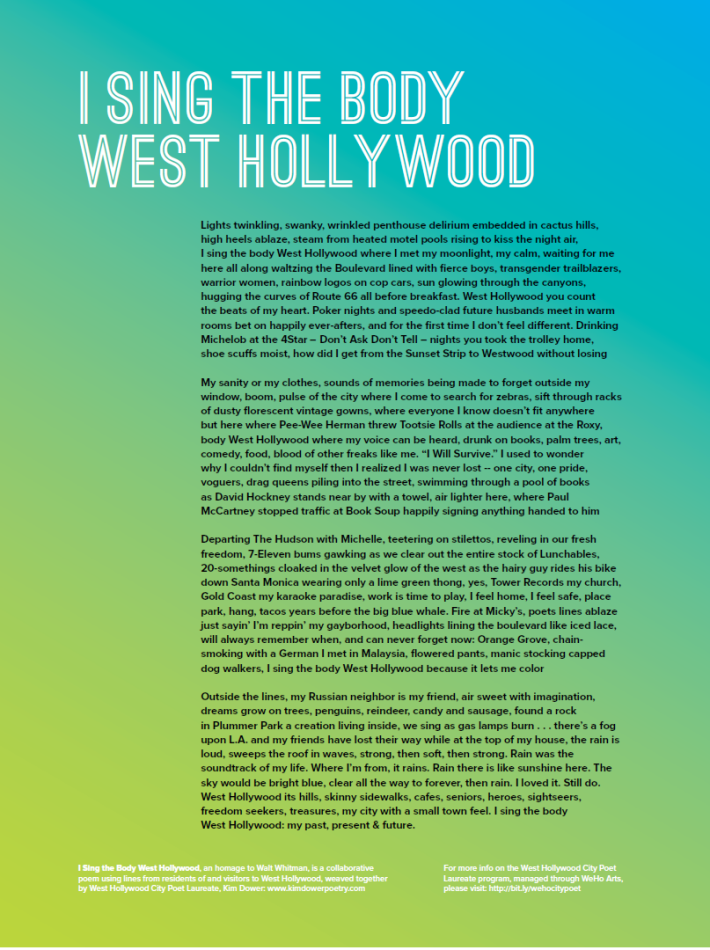 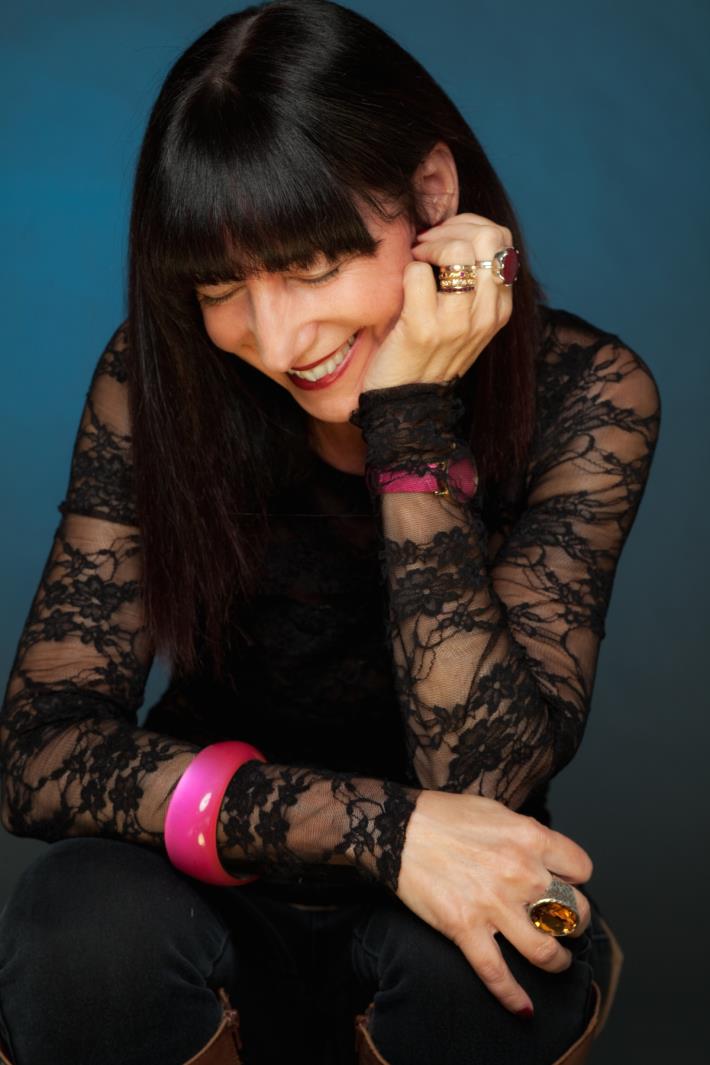 Kim (Freilich) Dower, a West Hollywood resident for over 30 years, was born and raised in New York City and received a BFA in Creative Writing from Emerson College, where she also taught.  Her first collection of poetry, Air Kissing on Mars, (Red Hen Press, 2010) was on the Poetry Foundation’s Contemporary Best Sellers list, and was described by the Los Angeles Times as, “sensual and evocative . . . seamlessly combining humor and heartache.” Slice of Moon, her second collection, (Red Hen Press, 2013), nominated for a Pushcart, was called, “unexpected and sublime,” by “O” magazine, and her third collection, Last Train to the Missing Planet (Red Hen Press, 2016) has been praised by our Inaugural Poet, Richard Blanco, as well as by Garrison Keillor, who has featured her work several times on “The Writer’s Almanac.” Kim’s work has also appeared in Ted Kooser's, "American Life in Poetry, Barrow Street, Eclipse, Los Angeles Review, Ploughshares, and Rattle. Her poems are included in several anthologies including, Wide Awake: Poets of Los Angeles and Beyond, published by The Pacific Coast Poetry Series, an imprint of Beyond Baroque Books and Coiled Serpent: Poets Arising from the Cultural Quakes & Shifts in Los Angeles, published by Tia Chucha Press.  She teaches workshops called Poetry and Dreaming and Poetry and Memory in the B.A. Program of Antioch University, Los Angeles.  Kim is also a literary publicist whose company, Kim-from-L.A. Literary and Media Services, creates media campaigns for authors and publishers.  www.kimdowerpoetry.com.