We’ve made changes to serve you better! The library rooms reservation process is now handled through ActiveNet, the City of West Hollywood’s Online Reservation system. Please go online to https://apm.activecommunities.com/weho or call West Hollywood Park at (323) 848-6534 for Library room rentals and information.

Virtual 360 Tour of the West Hollywood Library, City Council Chambers and its adjoining parking structure. Click on the button on the top right corner to view the tour in fullscreen.

The West Hollywood Library campus provides opportunities for Cultural Programs and displays within the public areas of the West Hollywood Library Facility. Organizations and individuals are welcome to apply for sponsorship. Proposals are reviewed by an inter-agency committee on a quarterly basis. Please note that the Library receives far more requests for programming than it is able to accommodate.

We have a variety of Cultural Programming at the library. For a list of upcoming events click here or follow WeHo Arts at the links below.

There are two commissioned public artworks, 'Peace, Freedom, and Creativity' (2011) by Shepard Fairey and 'Platanus bibliotechalis' (2011) by David Wiseman as part of the City's Percent for Art initiative. Also associated with the Library are the Art in the Streets murals by Kenny Scharf and RETNA  that adorn the sides of the adjacent Parking Structure and were installed as part of MOCA's Art in the Streets exhibition.

There are two artworks on long term loan at the library: Heart Sculpture by Mr. Brainwash and West Hollywood Park by Ramiro Gomez. 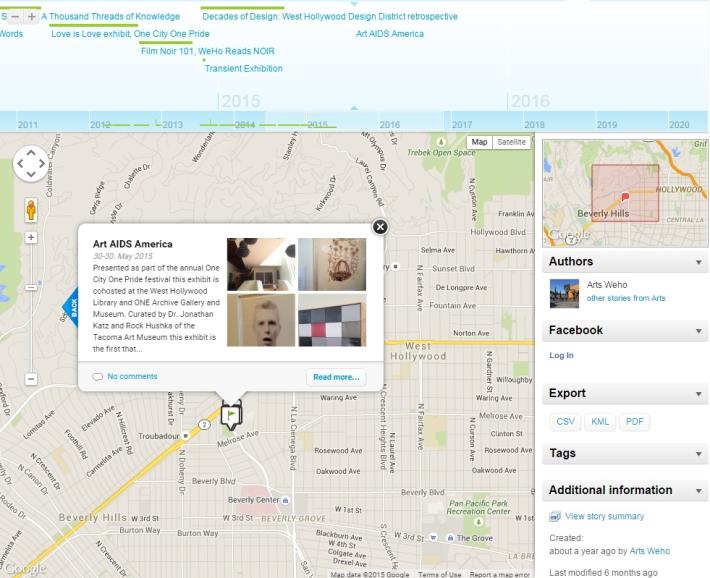 Other options for space - If none of the above options work for you, you may wish to contact www.spacefinderla.com to search for free or inexpensive space in various arts venues; and the City of West Hollywood Recreation Online for spaces in West Hollywood Park, King's Road Park, and Plummer Park available for rent.

Other Libraries: There are several libraries within a few blocks outside the borders of West Hollywood including the LAPL's Will & Ariel Durant Library and the Beverly Hills Library which have community rooms for rent.

Theatre/Rehearsal Space: In the City of West Hollywood the following resources may help you with finding performance or rehearsal space for your theatre production:

Phase I includes the newly-opened West Hollywood Library located at 625 N. San Vicente Boulevard (at Melrose) which is a 32,000 square foot LEED certified building designed by architects Steve Johnson and Jim Favaro. Phase I of the West Hollywood Park Master Plan is one of the major components of the City’s 25th Anniversary Capital Project which also includes development of the West Hollywood City Hall Automated Garage and Community Plaza Project and implementation of the Plummer Park Master Plan.