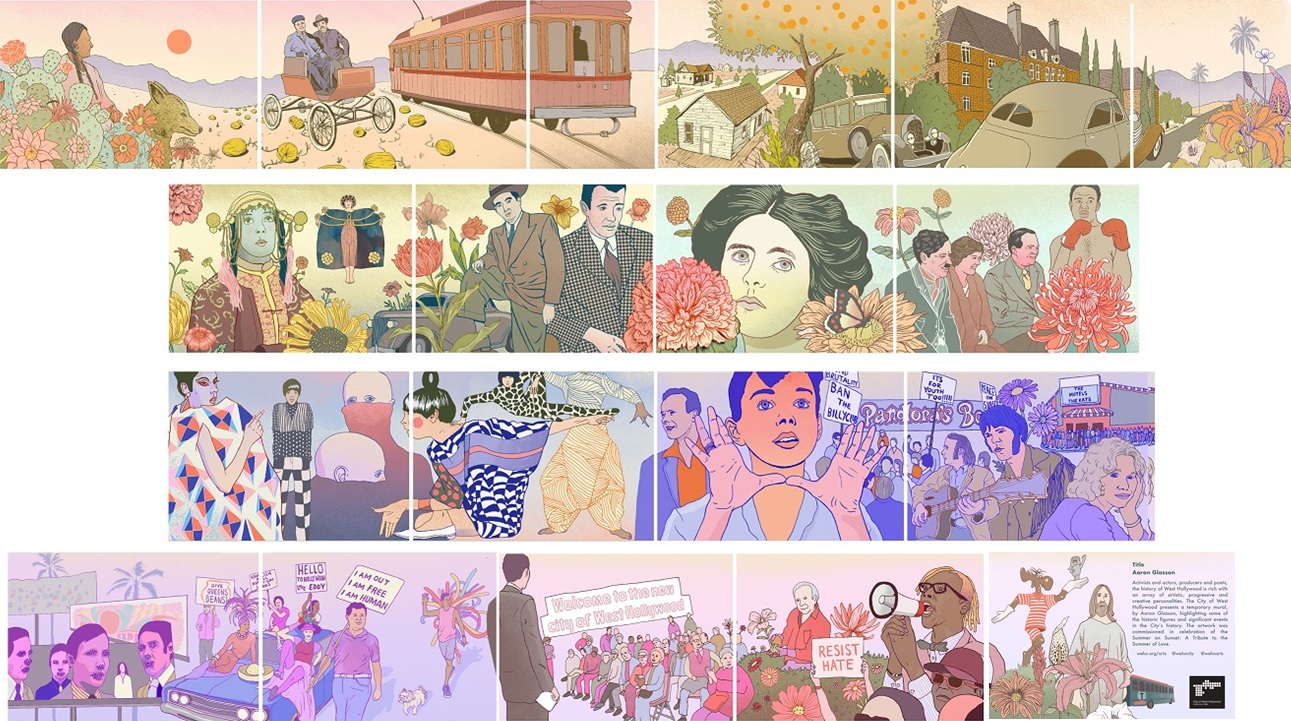 A Mecca of Bold, Retold

Activists and actors, producers and poets, the history of West Hollywood is rich with an array of artistic, progressive and creative personalities. The City of West Hollywood presents a 140-foot temporary mural, by Aaron Glasson, highlighting some of the historic figures and significant events in the City’s history. The artwork was commissioned in celebration of the Summer on Sunset: A Tribute to the Summer of Love.

The mural begins with an acknowledgement to the Tongva, Native Americans who inhabited the Los Angeles Basin and the Southern Channel Islands pre-colonization, and a nod to Moses Sherman, the founder of Sherman which later was renamed West Hollywood, and his most recognized achievement, the Los Angeles Pacific Railroad. The historic brick four-story structure illustrated in the artwork represents La Fontaine. The building was constructed in 1928 and is representative of a significant pattern of new high-density luxurious developments in the area around Fountain Avenue in West Hollywood.

With the evolution of the city came some early silent film stars. Notably, Russian immigrant Allah Nazimova represents the height of the silent film era and her mansion The Garden of Allah was located just outside of the City’s border on Sunset Boulevard. Nazimova wielded considerable influence and power in Hollywood as an artist, was bisexual, and famous in Hollywood for her women-only pool parties at her estate. Creatives such as Nazimova were trailblazers in the early days of West Hollywood who set a precedent that attracted other like-minded progressive artists and activists.

During the Prohibition, the Sunset Strip was the destination for movie stars, big-time writers, and entertainers who frequented the popular nightclubs and speakeasies. Gangsters like Bugsy Siegel and Mickey Cohen patronized restaurants like Ciro’s or the Sunset Trocadero. And it was not unusual to hear the trumpet playing of Coltrane coming from the jazz clubs like Club Renaissance.

West Hollywood resident, poet, writer, critic and screenwriter Dorothy Parker was a vocal advocate and defender of human and civil rights. She was a charter member of the Algonquin Round Table, a group of writers, critics, actors and wits, who often collaborated with one another and acquired national reputations for their contributions to literature. A champion of social justice, in her will Parker bequeathed her estate to Martin Luther King Jr. Upon his assassination some months later, the estate, including Parker’s literary rights, were turned over to the NAACP.

Mary Pickford and Douglas Fairbanks founded the Pickford-Fairbanks Studios in 1919 at the corner of Santa Monica Blvd and Formosa Avenue (known as The Lot since 1999). Later, with new partners Charlie Chaplin and David Wark Griffith the studio was renamed the United Artists Studio and was established to allow actors control of their own interests, rather than being dependent on commercial studios. The Joe Louis Story was distributed by United Artists in 1953.

Avant-garde clothing designer Rudi Gernreich’s clothes are generally regarded as the most innovative and dynamic fashion of the 1960s. He consciously pushed the boundaries of acceptable fashion and used his designs as an opportunity to comment on social issues and to expand society’s perception of what was acceptable. He was the first to introduce unisex designs and cutouts in clothing. He designed the first thong bathing suit, the first swimsuit without a built-in bra, and the topless monokini. Gernreich, with his then lover Harry Hay, co-founded the Mattachine Society, one of the earliest LGBT gay rights organizations in the United States, to improve the rights of gay men. Gernreich lived together in West Hollywood with his partner Oreste Pucciani, also a pivotal figure in the gay rights movement, until his death in 1985.

Henry “Harry” Hay, Jr. was a prominent American gay rights activist and civil rights campaigner. Hay has been described by author Stuart Timmons as the “Founder of the Modern Gay Movement.” In 1989, the West Hollywood City Council presented a Proclamation to Harry Hay for his 77th birthday, naming him as Honorary Citizen of West Hollywood.

Actress, and singer, Judy Garland once lived just north of the Sunset Strip. Garland had a large fan base in the gay community and is widely recognized today as an icon among gay men. She is famous for her role as Dorothy Gale in The Wizard of Oz (1939) and was the first woman to win the Grammy Award for Album of the Year for her live recording Judy at Carnegie Hall (1961).

In the 1960s, the Sunset Strip became a gathering place for the counterculture movement in Los Angeles where outbursts of social, creative and artistic freedom sporadically erupted. Rock’n’Roll dominated the music scene and notable musicians like Janis Joplin, Jim Morrison and Jimi Hendrix were fixtures at the clubs. The Whisky a Go Go was the first to introduce go-go dancers to the US and the place that propelled The Doors – the club’s house band at the time – into fame and notoriety. The Sunset Strip curfew riots erupted in 1966 in front of Pandora’s Box, where as many as 1,000 demonstrators, including celebrities Jack Nicholson and Peter Fonda, protested against the City’s new curfew and loitering laws. The riots inspired multiple songs including For What It’s Worth written by Stephen Stills and performed by Buffalo Springfield.

From the late 1960s and into the 1980s the Sunset Strip was temporarily transformed into the world’s largest drive-thru art gallery. Billboards, giant temporary monuments, were hand-painted homages to Rock. Depicting the latest album covers of top recording artists, ranging from the Beatles and Bowie to The Who and Led Zeppelin, the billboards’ visuals dominated the Strip and redefined outdoor advertising. The billboards were photographed by Robert Landau and published as a book in 2012. Large scale reproductions of the photographs are currently on exhibit through October 2018 at the City parking lot, 8775 Sunset Blvd.

The LGBTQ community in Los Angeles experienced the first gay-rights protests after officers beat gay patrons and arrested 14 for same-sex kissing at the Black Cat on New Year’s Day in 1967. The first LA Pride Parade was organized in 1970 to commemorate the 1969 Stonewall riots, an uprising triggered by a police raid of a gay bar in New York City. The fight over an anti-gay sign at Barney’s Beanery West Hollywood was the focus of the first major protest by the Los Angeles Gay Liberation Front, which was co-founded by Morris Kight. In the 1980s the parade moved to West Hollywood.

In 1984, Cityhood was proposed by an unlikely coalition of LGBT activists, seniors, and renters – these groups came together to form a City like no other with progressive policies and strong tenants’ rights protections. Through tireless determination, the City of West Hollywood was officially incorporated as an independent city on November 29, 1984. Previously, West Hollywood had been an unincorporated section of Los Angeles County.

Morris Kight, was an American gay rights pioneer and peace activist. He is considered one of the original founders of the gay and lesbian civil rights movement in the United States and co-founded the Los Angeles Gay and Lesbian Community Center. Kight regularly visited the Matthew Shepard Human Rights Triangle in West Hollywood to tidy up the area, water and plant new flowers, encouraging others to do the same.

In 2017, the colorful floats that were typically seen in the Pride Parade were replaced with people marching for human rights. The Resist March, harkened back to the roots of the original Pride Parade, a demonstration of fighting for human rights, and was inspired by the massive women’s marches that took place across the globe the day after President Trump’s inauguration.

Today the Sunset Strip continues to be a place where art and innovation intertwine in ever-evolving ways. The grit of the Rock scene from yesteryear is undergoing a transformation to an ambiance that is decidedly upscale. You can still visit several of the iconic establishments on the Boulevard on the new City Shuttle, The Sunset Trip. The free weekend shuttle has more than 20 stops along the Boulevard adjacent to notable businesses, hotels, restaurants, clubs, and public art. And, in the fall of 2018, Rocky & Bullwinkle, a historic sculpture from The Strip, will return as a permanent public art exhibition at Sunset and Holloway.

ABOUT THE ARTIST: Artist and creative director Aaron Glasson's diverse portfolio consists of vibrant murals, paintings, illustration, films and interactive installations. He is from New Zealand and now lives in San Diego, California. His work is autobiographical, inspired by his life, life encountered and the sometimes inexplicable nature of being. Exploring the coexistence of the unseen and the observed. Aaron is also the creative director of PangeaSeed, an international organization collaborating with members of the art, science, and environmental activist communities to raise awareness and education surrounding the conservation and preservation threatened marine species and ecosystems. Aaron has been painting murals for close to a decade. His work can been seen in Canada, the United States, Mexico, New Zealand, Sri Lanka, Vietnam, Thailand, and India. He has been commissioned to paint murals by ReThink San Diego, Jägermeister, Leucadia City, the Encinitas Mainstreet Society, PangeaSeed, Sea Walls, Inspire Festival, Mexico City Artwalk, and many more.