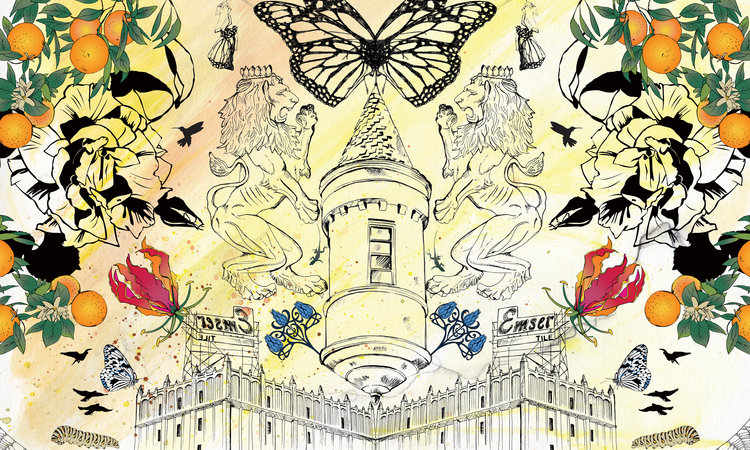 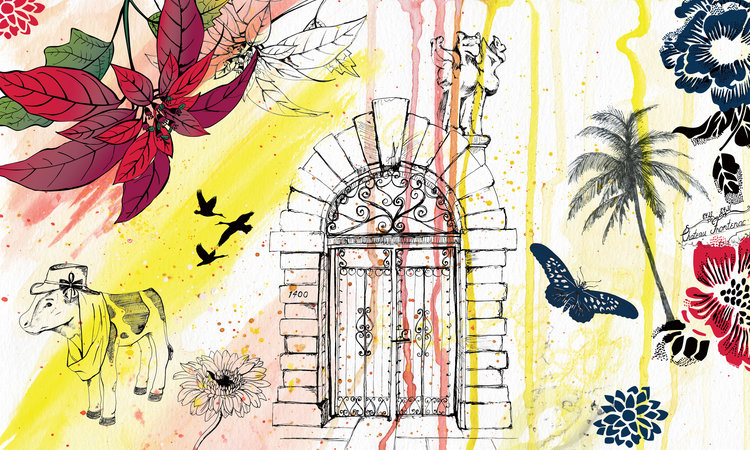 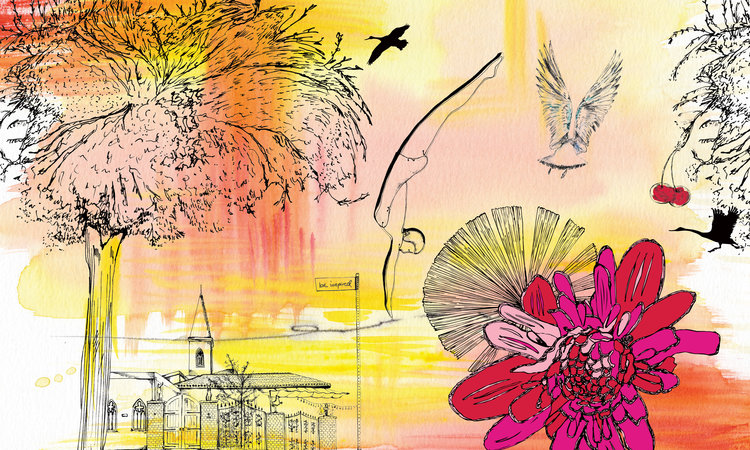 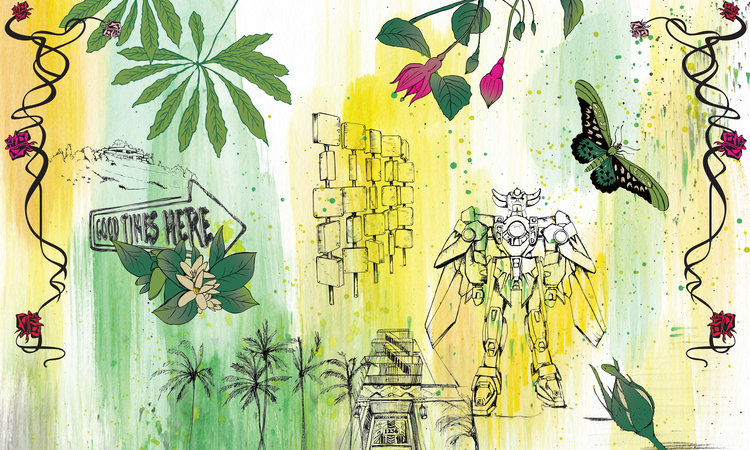 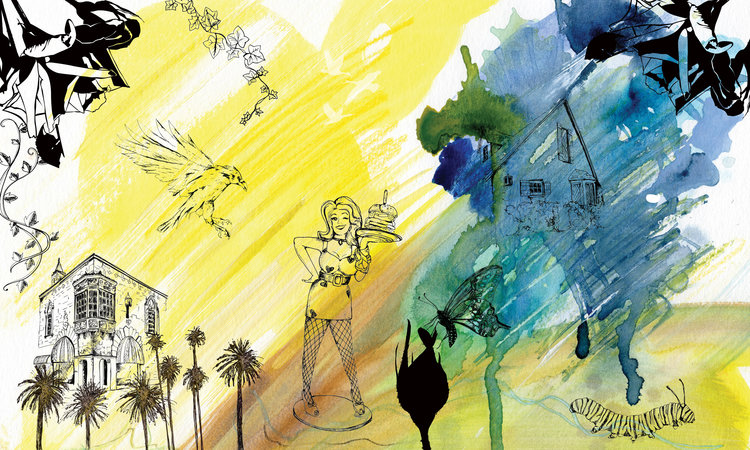 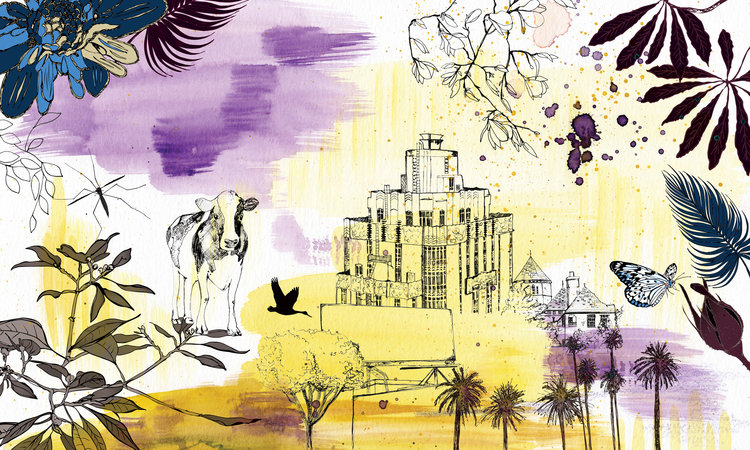 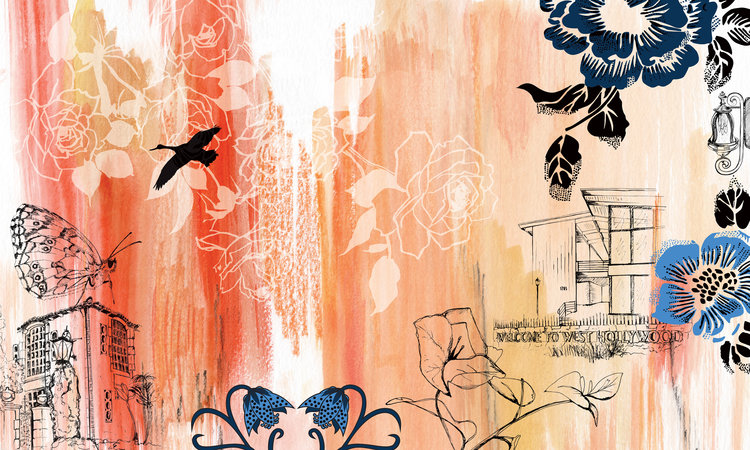 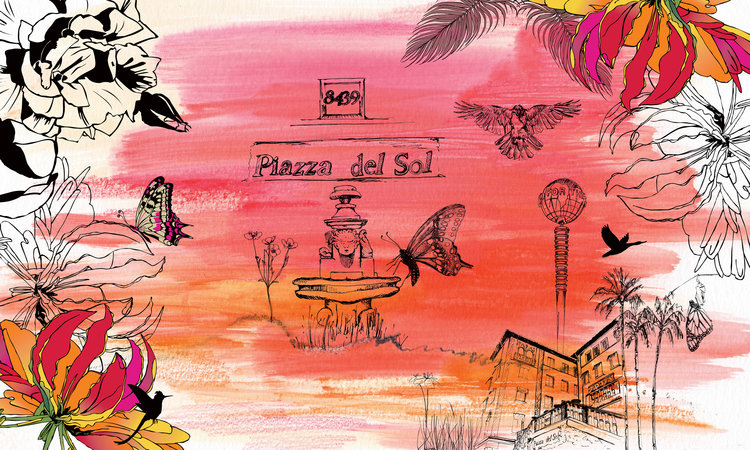 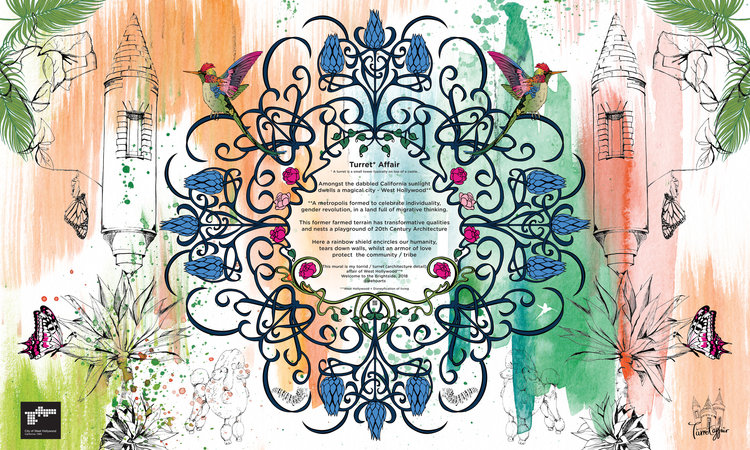 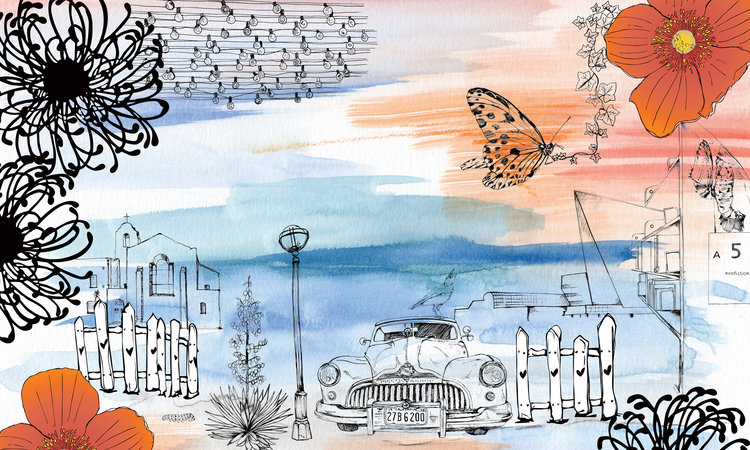 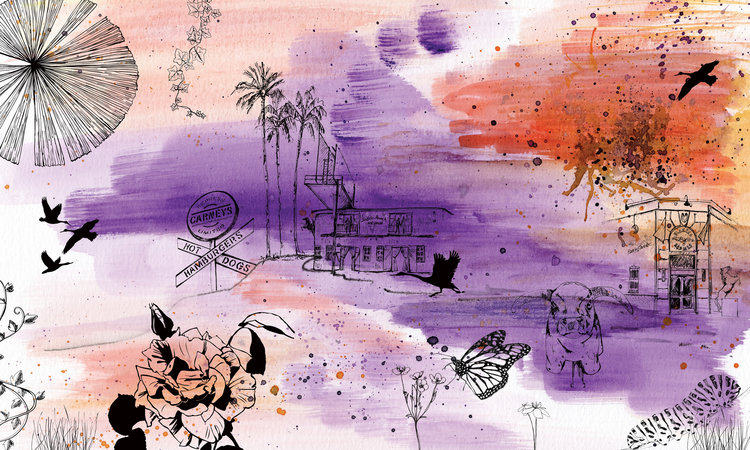 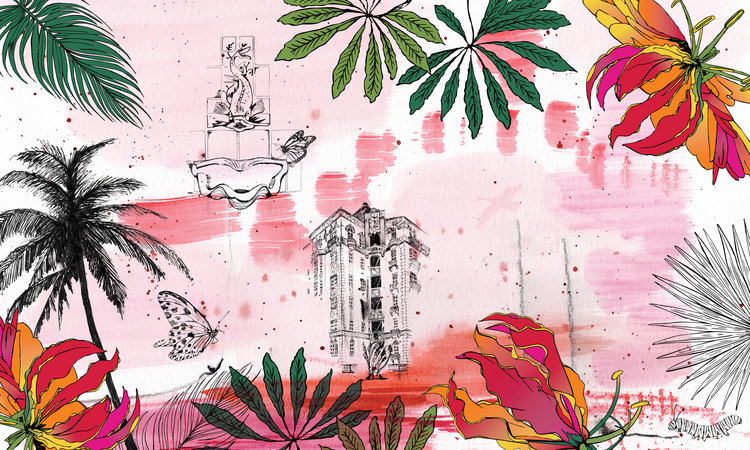 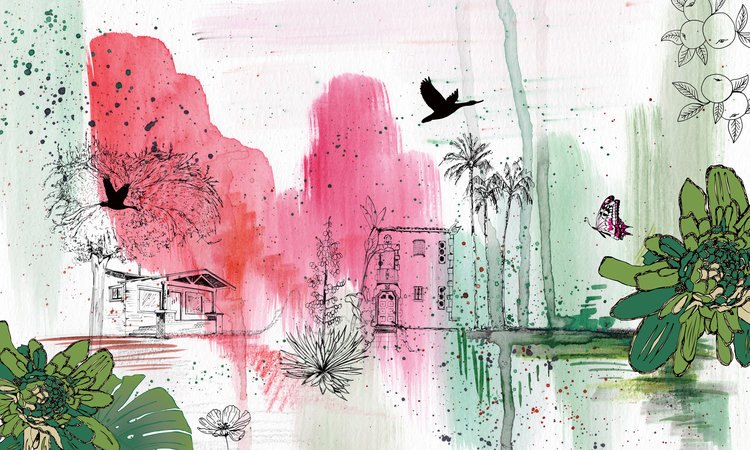 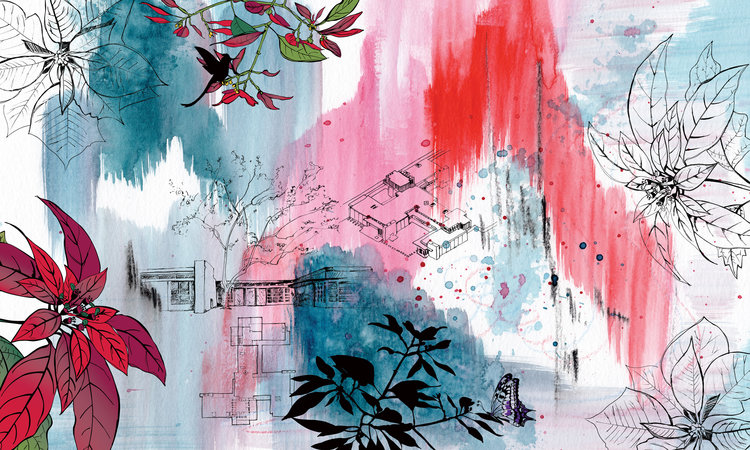 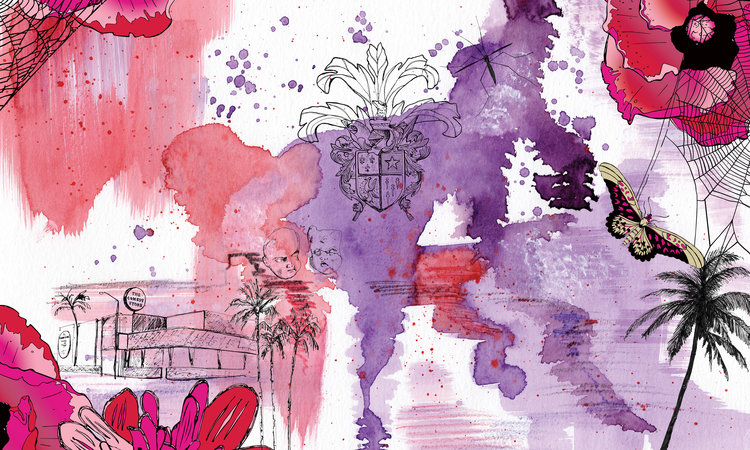 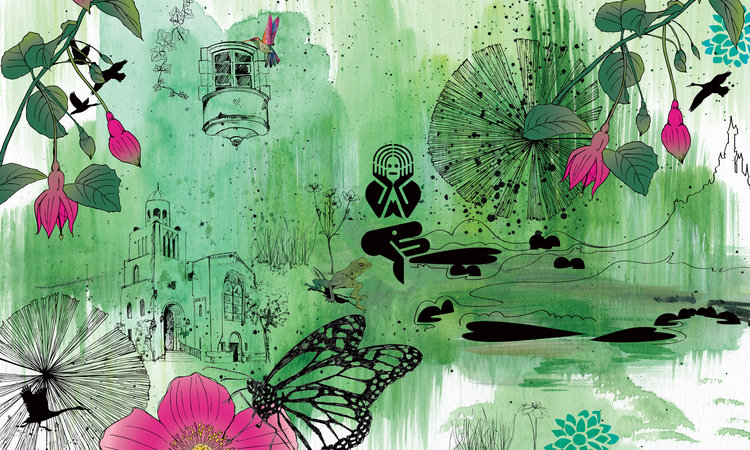 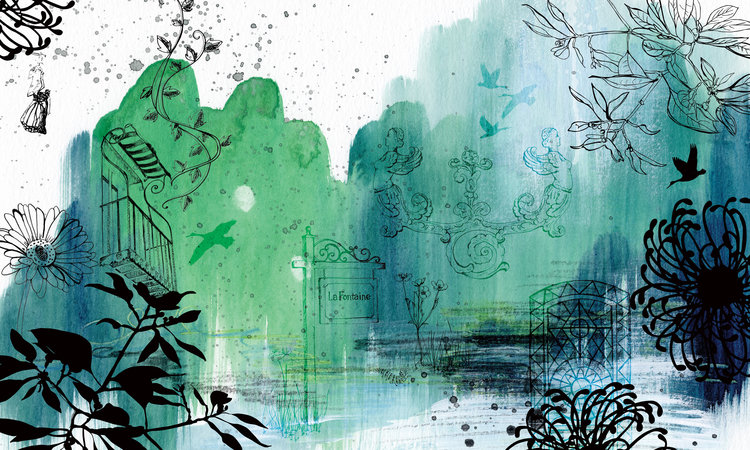 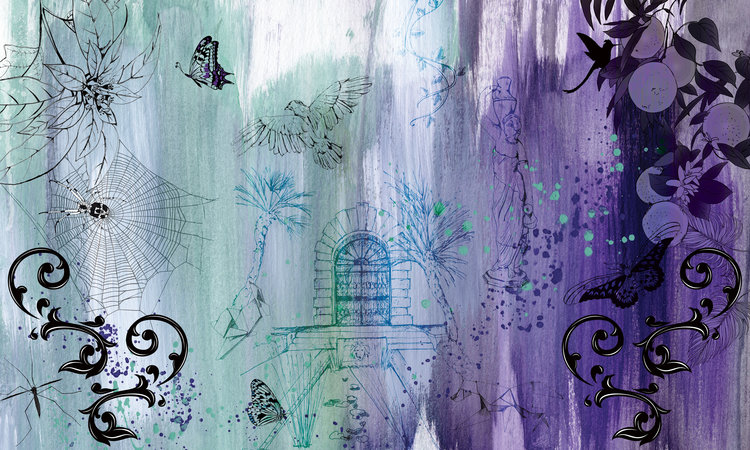 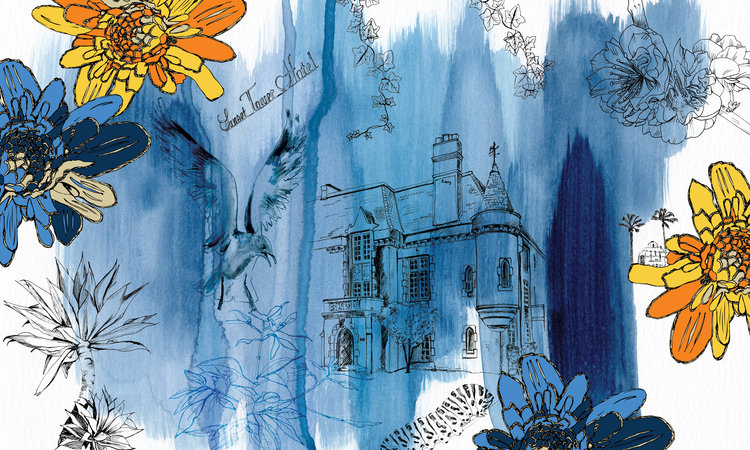 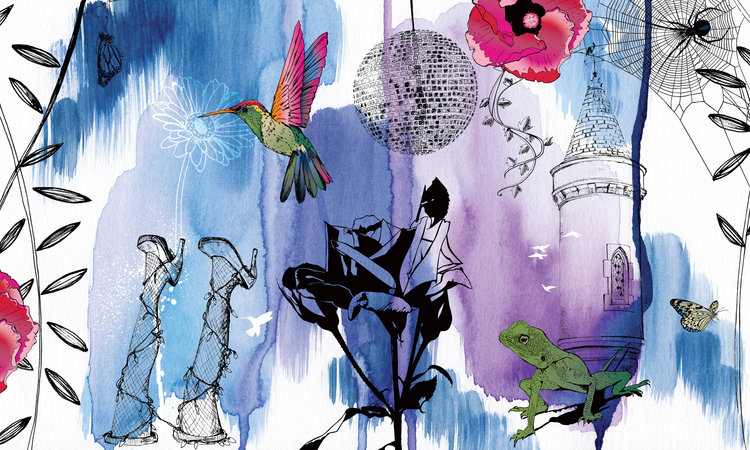 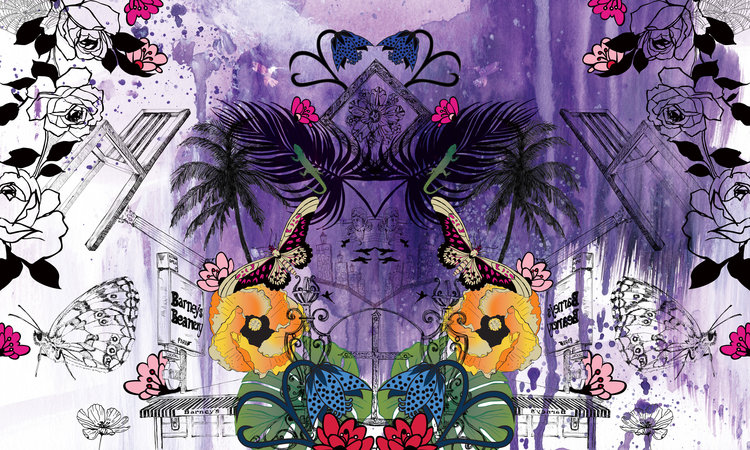 This 550-foot long art work is a visual love letter to the turrets* of West Hollywood and celebrates the City’s architectural history through watercolor, pen and ink illustrations fabricated on 55 colorful vinyl banners.

*a turret is a small tower on top of a larger tower at the corner of a building or wall, typically a castle.

Artist Statement: “West Hollywood is full of creatives, collaborating across all art forms. With more innovation seeping out per person per square mile than anywhere else in the world, West Hollywood’s patch of earth literally vibrates with a magical buzz. I believe that the vibration of creative thoughts in close proximity to each other elevates us all spiritually into a higher state of creativity. Thus whoever resides or works in the WeHo area is mastering our craft with advantage, we’re collectively vibrating and creating together.

"When I arrived in 2015, my first morning walk was on Robertson Boulevard. I’ll never forget the smell of the spring air that March morning or the magnificent full bloom of the bougainvillea’s outside the Hub of the House. I feel the land here has a special magical quality, a creative hum under my feet. I finally felt I had arrived at an extraordinary place where innovative dreams come true. I walk everywhere here. It’s my favorite place in the world to live (and I’ve seen a lot of places).

"Did you know, I think there are more turrets per person in West Hollywood than anywhere in the world? Don’t quote me on this but it’s remarkable how many turrets you can find in one neighborhood. In WeHo you can even play the game “my turret is bigger than yours” (pun intended). I hope you will be able to return to this piece and find something different each time. It’s a celebration on art, design, architecture, cultural diversity and my love of the city we stand within. I love WeHo.”

ABOUT THE ARTIST: Graduating from a BA (Hons) in Fashion at Kingston University, UK, 2001, Miss Brightside moved to Treviso, Italy, where she worked as a designer at United Colours of Benetton. In 2002 she relocated to Sydney, Australia for 10 years; freelancing for fashion designers such as Akira Isogawa. In 2011 Miss Brightside embarked into the art scene, screen printing alternative fairytale narratives onto glass. In 2012 the aMBUSH gallery, Sydney, hosted her first of many solo exhibitions where a thousand people attended opening night. The preview night was an extravaganza with dwarves dressed as cupids, three bands, two pole dancers, a contortionist, female bartenders dressed as green fairies and topless male waiters who handed out love potions made from absinthe cocktails mixed in a cauldron. This successful exhibition inspired Miss Brightside's thirst for further education. She undertook her MA Fine Art at Central Saint Martin (CSM), London, graduating June 2014. After graduation Miss Brightside sorted advice from a White Witch as to where she would live happily-ever-after. She has now been fulfilling that prophecy since 2015 in Los Angeles where she lives in a magical cupboard and works as a visual artist.