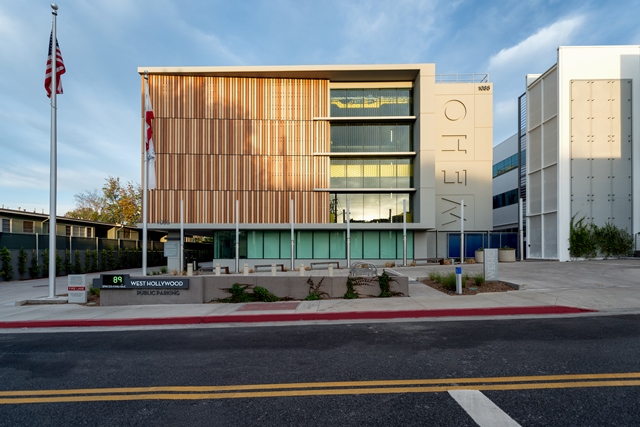 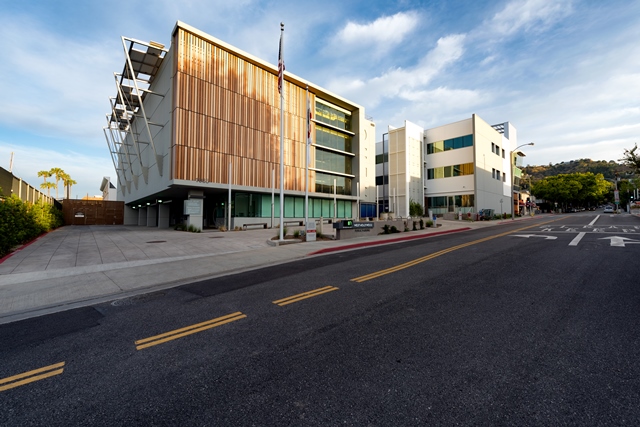 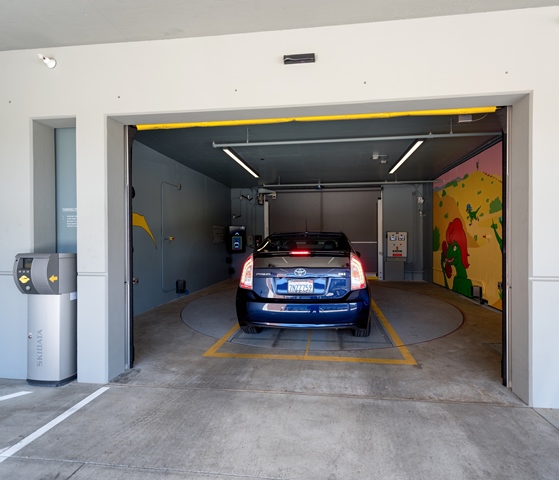 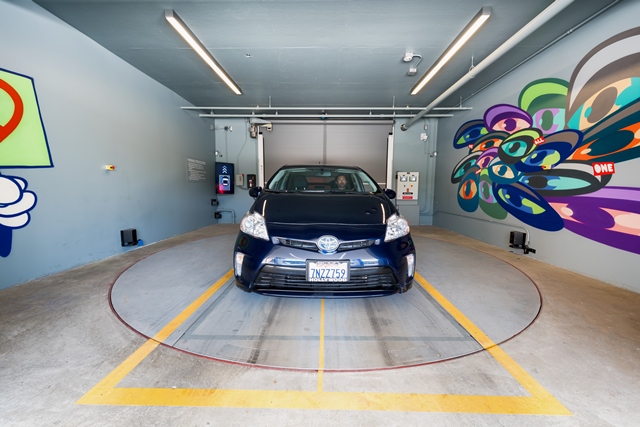 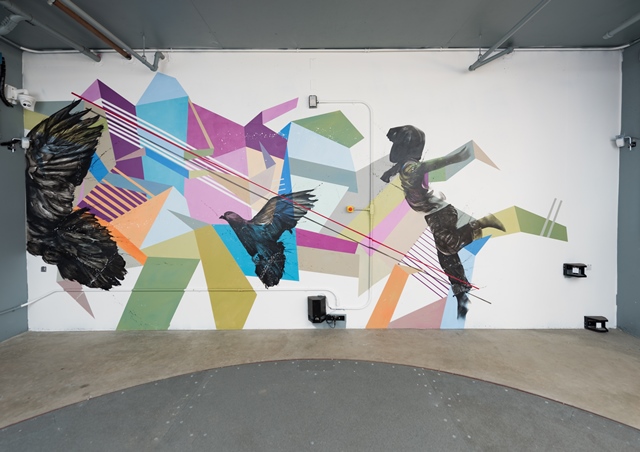 “Flight Plan,” through its symbolic images, alludes to the mysterious and innovative machine that operates the parking structure. Uplifting birds are directed towards the interior of the parking structure, indicating to the “flight” the car will soon take once inside the garage. The child, genderless and ageless, symbolizes excitement and curiosity of the unique nature of the parking structure. The accent piece, a bird landing, represents the mechanical function of the space in a more literal sense. 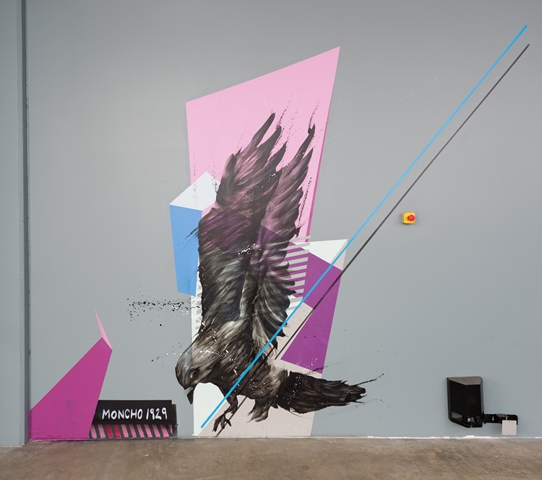 Born and raised in New York City, Moncho1929 has lived and worked in London, Italy, Korea and currently lives in West Hollywood. He has exhibited his works in various galleries in New York, Los Angeles, Boston, Miami and London. His work is in many private collections across the world including the French Consulate in Los Angeles and Soho House. His murals are archived with the Los Angeles Mural Conservancy and the Google Street Art Project and have been featured on various television shows and news outlets. www.moncho1929.com; @moncho1929 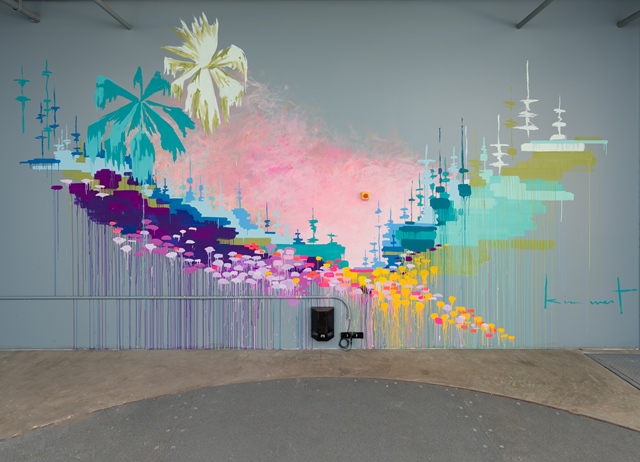 Kim West’s West Hollywood mural is an extension of the artist’s studio work which largely revolved around layers of memories in Technicolor. Abstracted trees and flowers emerge from and recede into the grey background. Her style is unabashedly feminine and layers opaque and translucent colors, deep blue purple, bright yellows and hot pinks, often seen in the phantasmagoric sunset horizon over the City of West Hollywood. 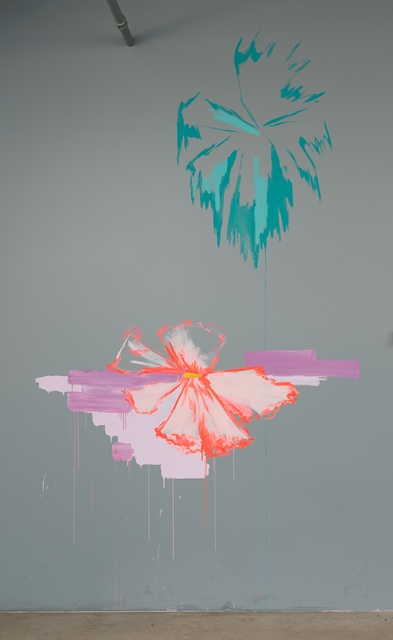 Following studies in painting and printmaking at Smith College and Amherst College, Kim West graduated from the painting department at the Rhode Island School of Design. Immediately upon graduation, West began exhibiting in Boston, MA. Today she lives in Los Angeles and her work continues to be exhibited nationally, and is collected and commissioned by everyday people, art collectors, celebrities, corporations, and educational institutions. Kim has several significant public murals in downtown LA’s arts district, including one monumental, four-story artwork on the exterior of the Hauser Wirth & Schimmel art gallery. www.kimwest.com; @westkim 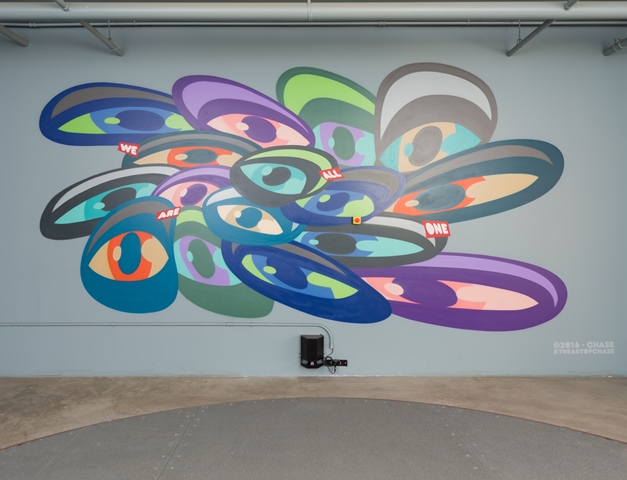 PARKING BAY 3: The Art of Chase “We Are All One”

Throughout the ages the eye has symbolized awareness. “We Are All One” is a cluster of eyeballs, which to the artist, represents harmony and individuals with different energies moving together. When focused on one eye you can get the sense of the individual, but when you take a step back you will notice the cohesion between the art elements, moving and flowing together as one. The detail on the opposing wall is symbolic of West Hollywood’s history of taking a stand for something and making their position known. In this instance the sign is an image of the peace and love symbol merged into one. West Hollywood stands for peace and love! 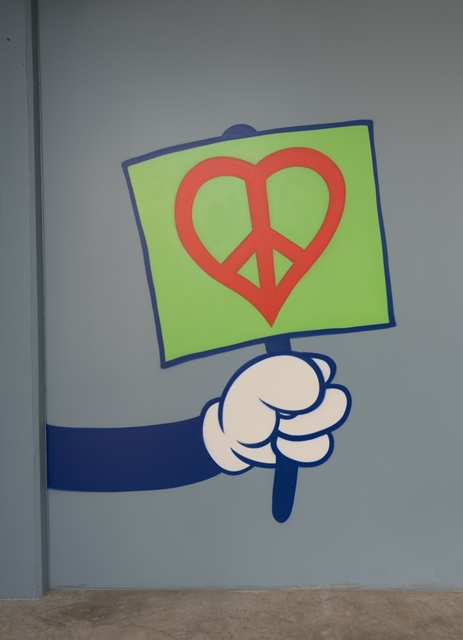 Positive Energy Activates Constant Elevation is a mantra that drives this artist. The Art of Chase is known for his quirky and humorous paintings that create disruption in our day to day lives. After moving to West Hollywood from Belgium in the 1990s he began his foray into the street art world on a large scale, seeing a raw city open to creation, offering a new mode of communication through imagery and quirky text. His determination, fueled by his mantra “where there’s a wall, there’s a way,” has given rise to international opportunities and over 300 murals worldwide. The psychedelic, graphic, and positive aesthetic of his work add to the urban landscape, but also seek to create a dialogue between city inhabitants and within ourselves. www.theartofchase.com; @theartofchase 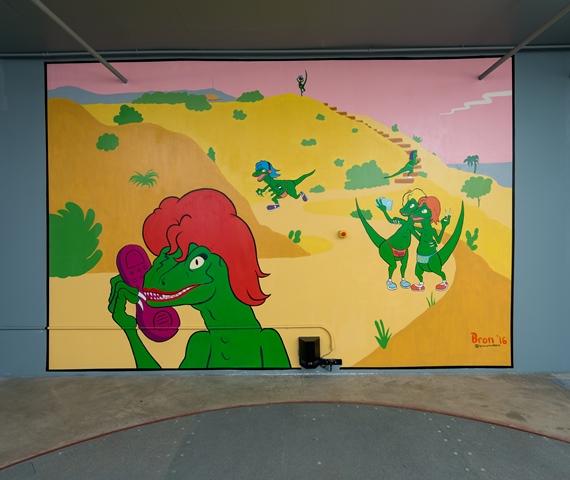 Creativity abounds in West Hollywood, in part because residents are able to cleverly conduct business on the go while out in nature. The playful wig-wearing-Raptors in “Business Park” disguises a deeper social commentary about the need for artist’s to wear many different “creative hats” in order to survive and succeed in the city.  The City will continue to modernize but our “Jurassic landscape” will continue to remain accessible for outdoor adventures, business meetings, or physical activities. The adjacent wall features an artistically inclined Pterodactyl (nicknamed #Lizadactyl in honor of Liza Minnelli). 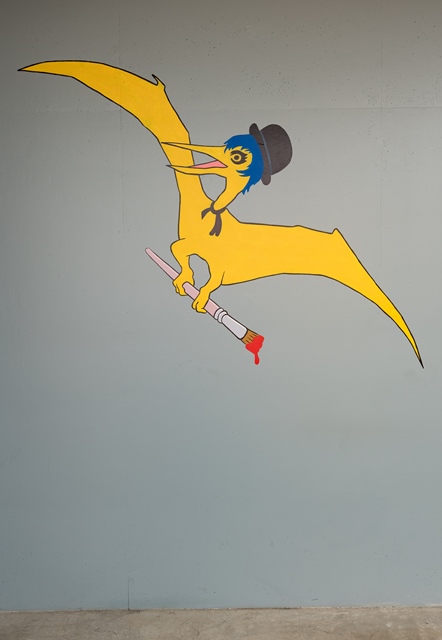 Bron is a digital artist and painter who lives in Los Angeles and works in West Hollywood. Her work focuses on pop aesthetics, campy/queer sensibilities, and portraiture in her signature style. She creates GIF Art and Animation and is the co-founder of YoMeryl, a Pop Art Studio. She is most recognized for her iconic digital mural “The Lesbian Last Supper” and its counterpart “The Creation of Neil” which have been featured on The Huffington Post, Buzzfeed, The Rachel Maddow Show, and more. Under the umbrella of YoMerlyl, Bron has created a wide range of GIF art, including the Brooklyn Museum GIF Series (created in collaboration with award-winning producer Nicole Ehrlich) and the “Start Talking. Stop HIV.” GIF Series for the CDC’s 2015 Pride Tour, which culminated in a Broadway-themed GIF display on a Times Square Billboard throughout the summer of 2015. www.bronwynlundberg.com, @bronwynlundberg

Follow us on social media @wehoarts and/or use #wehoarts. For questions, contact Rebecca Ehemann, Public Art Coordinator at (323) 848-6846 or rehemann@weho.org. For people who are deaf or hard of hearing, please call, TTY: (323) 848-6496. To learn more information about the City of West Hollywood and its arts programs visit www.weho.org/arts.