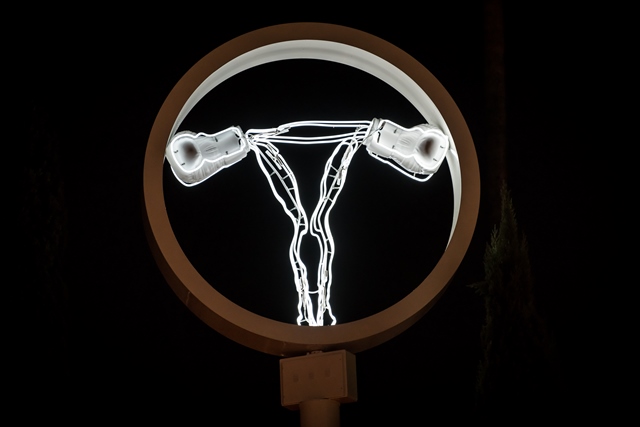 CHAMP is part of Zoe Buckman’s response to the ongoing debate on women’s rights in the United States. Art Production Fund, in partnership with The Standard, present the artist’s first public art sculpture, a 9-foot in diameter rotating neon artwork, positioned over 40 feet in the air, and located on the hotel’s property (corner of Sunset and Sweetzer).

Artist Zoe Buckman took up boxing the in a downtown New York boxing gym in the spring of 2015, and quickly immersed herself in the testosterone-heavy environment: one that elevates strength, “masculinity,” and commitment. She began to draw parallels between the traits needed to be a star athlete, and the traits needed to survive as a woman today. “Endurance, resilience, and power” are the makings of a pro-boxer, but, she points out, “those are qualities that all women have in abundance.”

For the artist, CHAMP is a symbol of and for Female Empowerment as we continue to fight for equality. As the piece has been disseminated since it’s initial creation, women from all over the world have found their own meaning in the work, and it has inspired solidarity for, and given a voice to, a range of women’s issues.

Growing up in East London in a family that focused on community theatre and activism, public art and advocacy was always a part of Buckman’s world view. “Personally I’m drawn to art that aims to spread critical thinking, inspires discussions, and challenges the status quo. I believe that artists can play a role in encouraging dialogue, and public art gives artists the platform to reach a larger audience.”

Buckman’s multidisciplinary practice encompasses neon, embroidery, sculpture, and photography. Her works explore themes of feminism and systems of oppression. Offering an honest discourse surrounding the female body and sexuality, she creates politically and socially resonant work centered around activism and advocacy. Following its launch timed with Women’s History Month, Buckman, Art Production Fund, and The Standard will partner with several local and national organizations, from cultural institutions to women’s advocacy groups, to offer a series of free public programs throughout the project’s yearlong installation.

This project was made possible by two West Hollywood Businesses:

Alice + Olivia by Stacey Bendet: Launched in 2002, alice + olivia by Stacey Bendet is a brand that allows customers to express their personal style. With clothing that juxtaposes the whimsical and flirty with the sexy and sophisticated, a+o epitomizes the personality and perspective of its founder, Stacey Bendet. The brand was born from Stacey’s personal quest to create the perfect pair of pants, and has since grown into a full lifestyle collection including ready-to-wear, gowns, shoes, handbags accessories, and eyewear. The brand is a Hollywood favorite with celebrity fans including Gwyneth Paltrow, Sarah Jessica Parker, Michelle Obama, Jessica Alba, and Kourtney Kardashian.

The Standard’s irreverent and playful sensibility, combined with a careful consideration of design, detail and service, have established its reputation as a pioneer of hospitality, travel, dining, nightlife, and beyond. Opened in 1999, The Standard, Hollywood is the first of The Standard hotels, and is now firmly established as a Hollywood classic. In the heart of the Sunset Strip, the 139 room hotel redefines what guests could expect from a hotel experience, offering a pioneering, irreverent and sexy take on the concept of hospitality. Champ joins other public art installations at The Standard, Hollywood, including The Box and the Projection 24/7 series (also in collaboration with Art Production Fund), as well as works by artists such as Geoff McFetridge, Ryan McGinness and Piero Golia. The Champ programming coincides with The Standard’s recent activist initiatives including, but not limited to, Ring Your Rep, partnerships with The ACLU, Everytown for Gun Safety, and expansive editorial content both in-room and online.