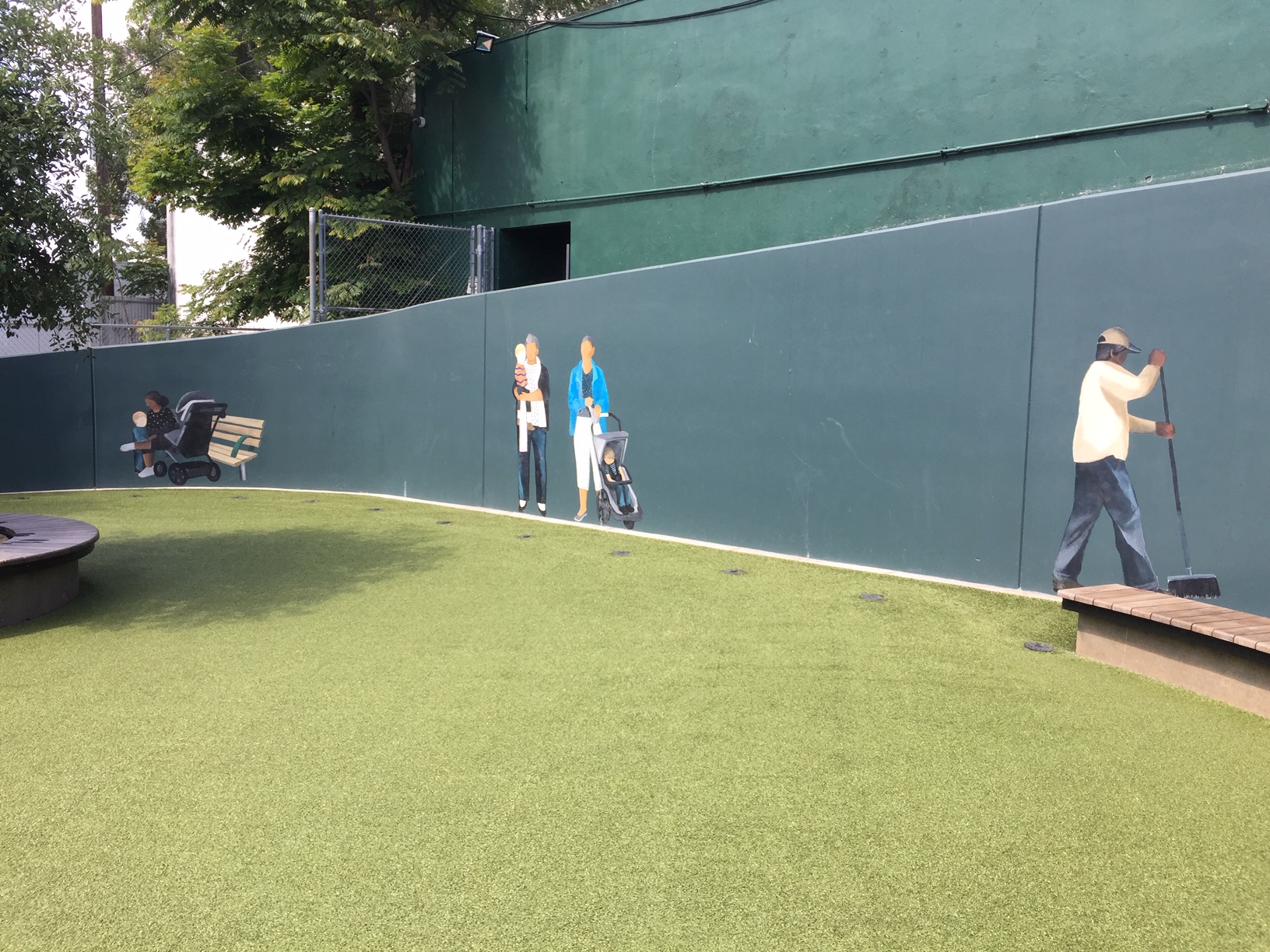 Ramiro Gomez is recognized for addressing issues of immigration and making visible the "invisible" labor forces that keep the pools, homes, and gardens of Los Angeles in such pristine condition. He first gained notoriety for installing hand-painted, life-sized cardboard cutouts of nannies, gardeners, valet workers and housekeepers in and around West Hollywood, Beverly Hills, and other Westside locations. "There is glamour and luxury in West Hollywood," says Gomez, "but there are people who are needed to maintain that luxury." It is in the intersection of glamour, luxury and labor that Gomez sees beauty.

The artist sees the City of West Hollywood as a diverse blend of people from many different ethnic and social backgrounds, connecting specifically with the many people who work in various domestic and service-oriented jobs in the city. Three of the figures in this mural are based on real-life nannies named Daisy, Elsa, and Lucy who Ramiro met while working as a nanny himself. The fourth male character in the composition is based on several gardeners.

In 2013, Gomez was named one of the 'Top 25 Young Artists to Watch' by Art Voices magazine. In 2014, Gomez had his solo gallery debut at the Charlie James Gallery in Los Angeles, and went on to show widely across North America. A monograph on his work by Lawrence Weschler (Abrams), titled "Domestic Scenes: The Art of Ramiro Gomez" was released in 2016. His work was included in the Getty's Pacific Standard Time: LA/LA exhibitions (2017) - "Home - So Different, So Appealing" at the Los Angeles County Museum of Art (LACMA), a joint show, and "In West Hollywood" at the West Hollywood Library with his partner, David Feldman.

Ramiro Gomez was born in San Bernardino, CA to undocumented Mexican immigrant parents who have since become US citizens. He briefly attended the California Institute for the Arts before leaving to take work for several years as a live-in nanny with a West Hollywood family, an experience that did much to inform his subsequent art practice. Currently the artist lives and works in West Hollywood. For more information about Ramiro Gomez, read through his artist profile here.

A reception for the artist was held on Saturday, September 21, 2013 in West Hollywood Park.

For more information on this project contact Mike Che, Arts Coordinator, at mche@weho.org. To report a damaged or vandalized artwork please contact Rebecca Ehemann, Public Art Administrator, rehemann@weho.org, 323-424-6846. For people who are deaf or hard of hearing, please call, TTY: (323) 848-6496. To learn more information about the City of West Hollywood and its arts programs visit www.weho.org/arts.