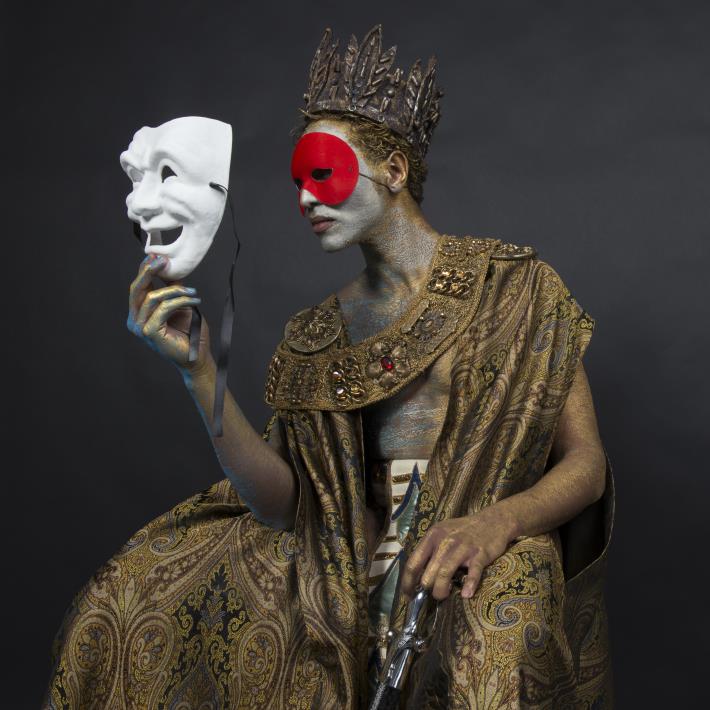 “The Persona,” is from a series titled Immersive Identity by artist Yuri Boyko in collaboration with Valeria Troubina. The artwork reflects on individuation – a process of integration of repressed ideas or thoughts into a human’s outward persona and acceptance of one’s individual traits in a realm of archetypes of the collective unconscious.

Identity comes from Latin “identitas” (sameness) and in philosophical terms defines a relationship of each thing to itself and is used to examine personal identity and change over time. The series ‘Identity’ addresses human self-conception in a sociological context. It explores radical change as well as ever present humanity. Human identity transcends national, cultural, physiological, sexual, or virtual signs—all the while immersed in them.

Working with archetypical structures within the framework of photographic media, a signifying persona-image was followed and observed. This approach was natural for the model, which didn’t have any set instructions, but rather pointers of a psychological state of mind.

ABOUT THE ARTIST: Yuri Boyko is residing in Los Angeles. He took up photography in early childhood with a simple Lomo camera and, encouraged by the family, had set up a portable dark room in their urban apartment. Yuri attended British Higher School of Art and Design, Department of Photography, where his graduation work of seven large-scale B&W diptychs presented constructivism treatment of a national landmark.

His early work of video sequence and still images dealt with infinitely repetitive circle of life stages. Later he worked on a series to transform transient public art objects into permanent abstractions on photographic surface, as well as on a study of visual perception modification by commonplace architectural elements and their color spaces. Subsequently, a large scale collaborative project of life sized prints addressed human self-conception in a sociological context and explored its radical change over time as well as its ever-present humanity. Currently he continues to develop ideas of the identity personification through psychological dimensions of figurative and representational series of images.

Yuri’s work has been shown in the US and in Europe.  He was selected for Second Place Award, by Paul Martineau, associate curator at the J. Paul Getty Museum, and for Short List of Artisti Primiati (Top Artist) at the V Biennale of Contemporary Art in Genoa, Italy and Artist Residency at the Center for Research and Creativity Casmarles in Barcelona, Spain.  Yuri received partial Grant Award for Artist Residency at Vermont Studio Center, Johnson, VT and Quick Grant Award through Creative Capacity Fund, Center for Cultural Innovation, Los Angles.  He currently maintains a studio in Hollywood, CA.