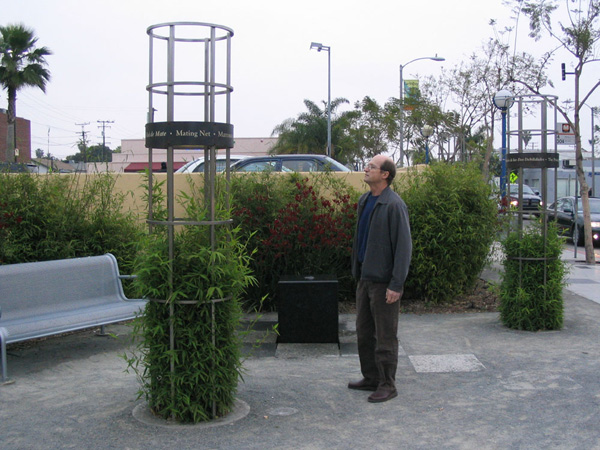 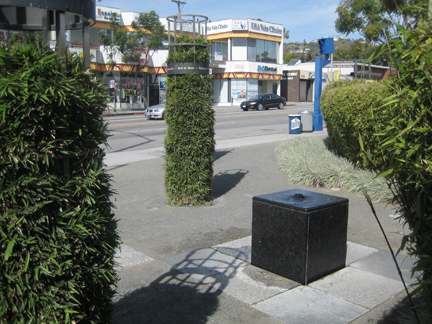 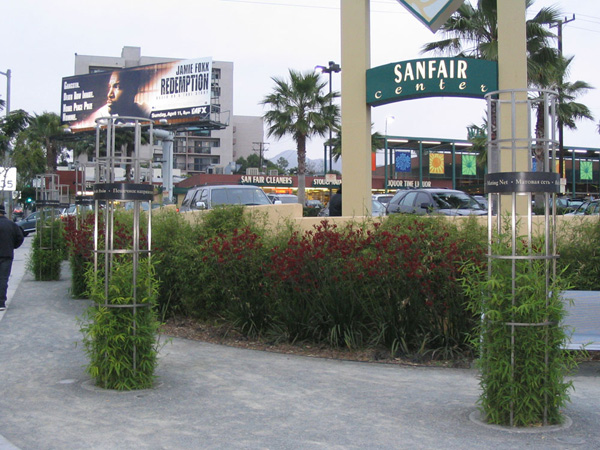 About the artwork: En Passant is a collaborative effort by Burton and Company, Landscape Architects and Barbara McCarren, artist, for the bus stop garden at the intersection of Santa Monica and Fairfax Boulevards. The project takes its conceptual cue from the game of chess. The immediate community, comprised of many immigrants of Russian descent familiar with chess, along with the notion of navigation the urban grid suggested the game as an appropriate reference to present at the site.

Columns of bamboo stand in as line pieces, knights and pawns in position across the sidewalks at the NE corner. Each column is banded with a poetic phrase from the language of chess that is also an intriguing phrase on its own that often has another meaning in common usage (Ex: “The principle of two weaknesses”). The columns are illuminated at night for dramatic effect.

There are black and white granite pavers installed throughout the project area pavement. Their arrangement denotes the paths on the board traveled by the various chessmen.

The landscape, featuring a focused planting of both captured and unrestrained bamboo statically mimics the stop and go of traffic and reinforces the allusion of the game of chess. All plantings feature red, white, black, and green flowers and/or foliage. The towers provide a strong vertical identity both day and night to the corner.

While driving and transit audiences appreciate the visual effects of the project, it is the pedestrian that experiences the visual, physical and conceptual components simultaneously.

About the Artist: Installation artist Barbara McCarren creates witty, thoughtful, and accessible site-specific works. She uses her installations to provide new insights to commonplace objects. Her major public art commissions include Pershing Square Park, Los Angeles; Cesar E. Chavez Park, Long Beach; San Francisco Zoo; Santa Monica Boulevard Streetscape, California; Alhambra Gateway Walk, California; and the Long Beach Shoreline Gateway, California. McCarren received her BA in Fine Arts, Magna Cum Laude, from the University of California, Los Angeles and her MFA from the University of Southern California in 1986. She was awarded a grant from the National Endowment for the Arts, Visual Artists Fellowship in 1988. McCarren received an award for Design Excellence for the Santa Monica Boulevard Transit Parkway Project from the City of Los Angeles in 2003.