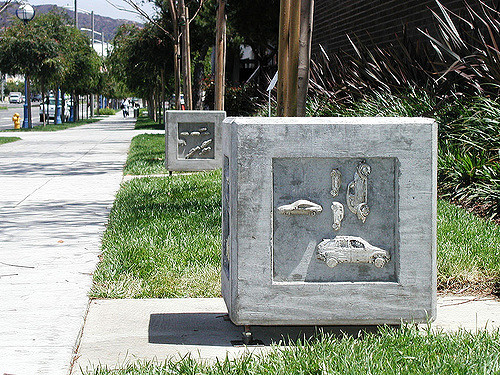 About the artwork: A real time sound installation that transforms street noise into harmonic sounds from the bus stop at the south-east corner of the intersection, creating a psycho-acoustic effect in public space in real time. The sound of traffic resonates as an under tone to the ambient sound and the resulting harmonies are played from two loudspeakers housed within the cement sculptures. There is no tape or CD. The sound emanating from the artwork is the music hidden within the traffic’s roar at that very moment. Collaboration with Compound Design Collective, Bill Bailou and Cecile Boucher.

About the Artist: Bruce Odland is an artist who thinks with his ears. A pioneer in sound installations, his first public sound installation, SUN SONG, broadcast a four channel cloud of reverberant sound over an outdoor festival in Denver from the Clock tower of East High in 1977. Since then he has discovered resonance and beauty in both the fractal music of nature and transforming vast industrial soundscapes of the cities into harmonic music. Tonic (2005), for West Hollywood, and Harmonic Bridge (1998) for MASSMoCA are permanent pieces reclaiming underutilized city spaces with harmonic resonances.

Over the years, Odland has lent his ears to many collaborative projects in film, dance, museum installation and theatre with artists such as Laurie Anderson, The Wooster Group, Peter Sellars, JoAnne Akalaitis, Wallace Shawn, Andre Gregory, Peter Erskine, Tony Oursler, Dan Graham, Robert Woodruff, Bill Morrison, Stacey Steers, Ron Miles and many others. Recently he co-directed a major outdoor sound installation with Laurie Anderson for Novartis in Basel, Switzerland. He has received artist grants and awards from NYSCA, Foundation for Performing Arts, Bermont Foundation, the DAAD Fellowship, Rensaleer Polytechnic Institute residency, Golden Muse, Helen Hayes, Golden Reel, and Focus awards, and a Prix Ars Electronica. Currently he is founding the TANK, a center for sonic arts and experimentation in a giant abandoned water tank in the high desert of Western Colorado.