Five freestanding mirrored volumes composed of parallel and perpendicular planes hover above a 40-foot diameter circle of green. By day, these forms reflect the park visitors and environment as well as the surrounding West Hollywood views. By night, the mirrored surfaces become pure fields of color that slowly move through the color spectrum. These colors reflect off of each other, merging upon colors, creating new spaces of color, projection and reflection.

Parallel Perpendicular is meant to be an entirely interactive piece. This interaction can occur from a single point…say from a park bench…watching the sun and clouds of the Southern California sky move across the mirrored surfaces. Interaction can also occur through movement as the reflections of trees, ground, sky and people create “warbles” in the environment…where reflections across the park merge with reflections directly behind you, both of which collage together with framed images of the view in front of you. At the same time, you can approach the work and see yourself within it. Every viewer becomes part of the actual skin of the piece.

Sited in the center of the Robertson-adjacent portion of West Hollywood Park, the scale of Parallel Perpendicular is in direct response to the more intimate atmosphere of this zone. This beautifully situated area will not only provide a more pedestrian scale, but also will serve as a park entry and connector to the Robertson and Santa Monica Boulevard retail and neighborhood zones. Parallel Perpendicular is sited as the focus of this portion of the park in an effort to draw people into West Hollywood Park both during the day and in the evening. Parallel Perpendicular is built from a stainless steel internal framework that is wrapped with a custom glass lay-up of 2-way mirror and clear mirror layup with an internal safety lamination. The 18” wide “sides” of each of the elements is composed of regular ¼” mirror with a safety lamination adhered to the backside. LED lighting at the interior of the framework provides an even glow across the various surfaces while simple hardware components control the timing, programming, and power supply for the lighting. The power components will be contained within the framework of each, while the lighting controls can be accessed remotely. All components are weather-proof able to withstand the rain, heat, and cold of West Hollywood. All 5 of the elements “hover” on a 12” diameter brushed stainless steel tube (internally bolted directly to the framework) that provides both structural support and connectivity for wiring.

All volumes are centered along a datum that is 8’-0” from the finished ground plane. This center line being above the normal human eye level will direct the majority of view upward into the trees and West Hollywood sky. The bottom edge of each volume hovers off of the water surface, varying from 1’-0” to 4’-0”. 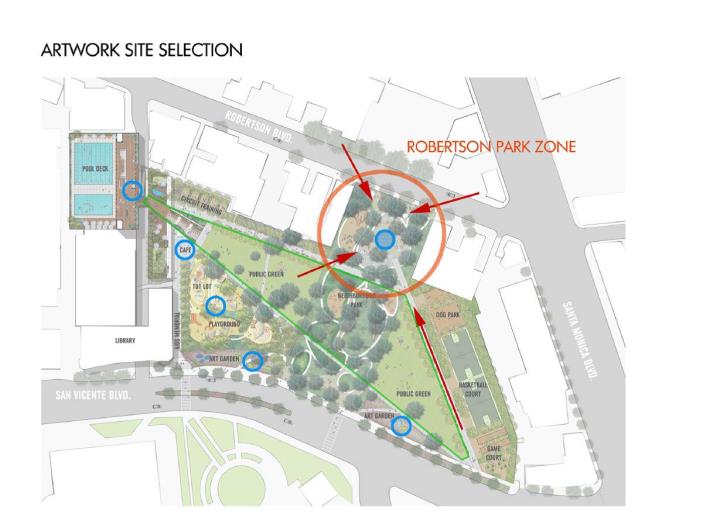 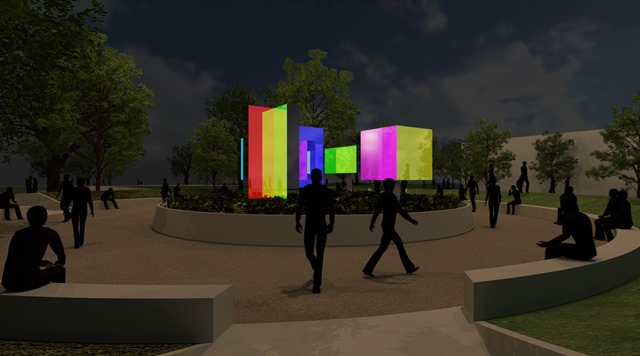 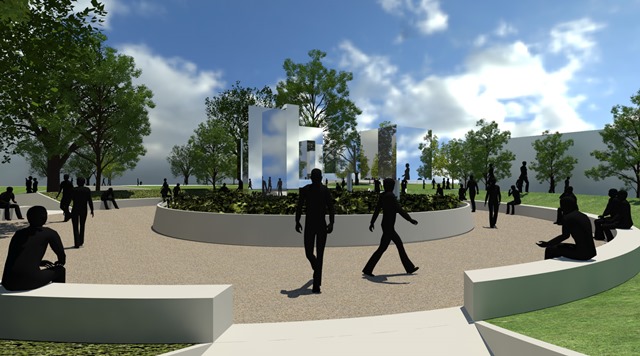 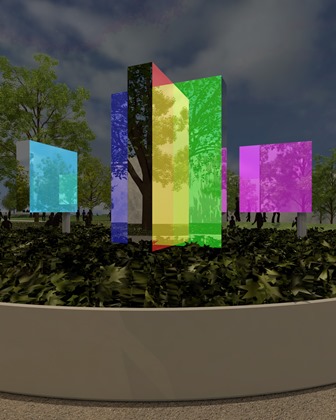 Phillip K. Smith III received his Bachelor of Architecture at the Rhode Island School of Design. From his Palm Desert, CA-based studio, he continues to push the boundaries and confront the ideas of modernist design. Drawing inspiration from the cold rigidity of the Bauhaus movement, the reductive geometries of minimalism, and the optic sensation of California's Light and Space movement, Smith III attempts to resolve the complex challenge of finding a natural state of life and spirit within these ideological aesthetic constrictions. The results are deceptively simple and compelling objects that seem to breathe and move as you observe and interact with them.

Smith's sculpture "Infinity Column" was featured in the 2008 annual review in Art in America, while his work "Inhale/Exhale" is included on the cover of Chris Van Ueffelen's book, 500 x Art in Public. In 2010, he was honored as the Artist-in-Residence at the Palm Springs Art Museum, during which he created his well-received installation, "Aperture". Included in the exhibition, Smooth Operations: Substance and Surface in Southern California Art, Smith's work was exhibited alongside artists such as Peter Alexander, Larry Bell, DeWain Valentine, and Craig Kauffman a the Museum of Art and History in Lancaster, CA. Subsequently, he was offered a solo exhibition at that same institution. In October 2013, he launched a project titled "Lucid Stead" in Joshua Tree, CA. This installation became an international phenomenon receiving tremendous attention both online and in print world-wide. Architect Magazine listed it as one of the "Very Best Projects of 2013" and the Los Angeles Times named Smith as one of the three "Faces to Watch in Art 2014". In April of 2014, Smith launched "Reflection Field," a colossal light installation that once again landed him in the Los Angeles Times with a full-page article about the installation, Smith, and his practice. He has since been commissioned to create "Parallel Perpendicular" for the City of West Hollywood and has participated in the Artist Residency Program at Dartmouth College, whose lineage includes some of the most innovative artists of the last century, including Robert Rauschenberg, Frank Stella and Donald Judd.