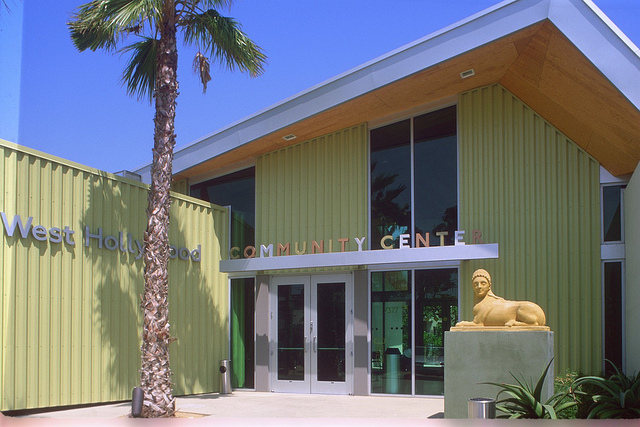 Richard Turner, The Riddle of the Sphinx, 2001

About the artwork: The riddle of the sphinx – “What walks on four legs in the morning, two legs at noon and three legs in the evening” – is a question that draws our attention to the cycle of life, which begins with infancy and continues through maturity to old age. Richard Turner’s sculpture takes its cure from the fact that the West Hollywood Community Center houses a teen center in one wing and a senior center in the other. The piece was designed to mediate between youth and age with its use of the ancient riddle. The brightly colored concrete base and fiberglass sculpture with its computer generated topology is intended to complement the postmodern quality of the building’s architecture.

About the Artist: Artist/curator Richard Turner  is a Professor Emeritus at Chapman University where he taught contemporary Asian art history and studio art. He lived in Saigon, Vietnam from 1959 - 1961. He studied Chinese painting and language in Taipei in 1963 - 1964 and Indian miniature painting in Jaipur, Rajasthan in 1967 - 1968 while on a Fulbright scholarship. As Director of Chapman University’s Guggenheim Gallery, he curated over seventy exhibitions. His current studio work is sculptures and drawings based on Chinese scholars’ rocks and Japanese viewing stones.

Mr. Turner has worked as a public artist for over thirty years on projects ranging from metro stations, public parks and water treatment facilities to a justice center, veterans’ memorial and a university chapel. He has worked independently and as a member of a design team, collaborated with architects, engineers, landscape architects and other artists. His public work is guided by a desire to make pieces that are accessible but not obvious, pieces that reveal themselves over time to a diverse audience. His travels in Asia inform his work. He also brings his experience as a university professor, administrator and gallery director to the public art process.