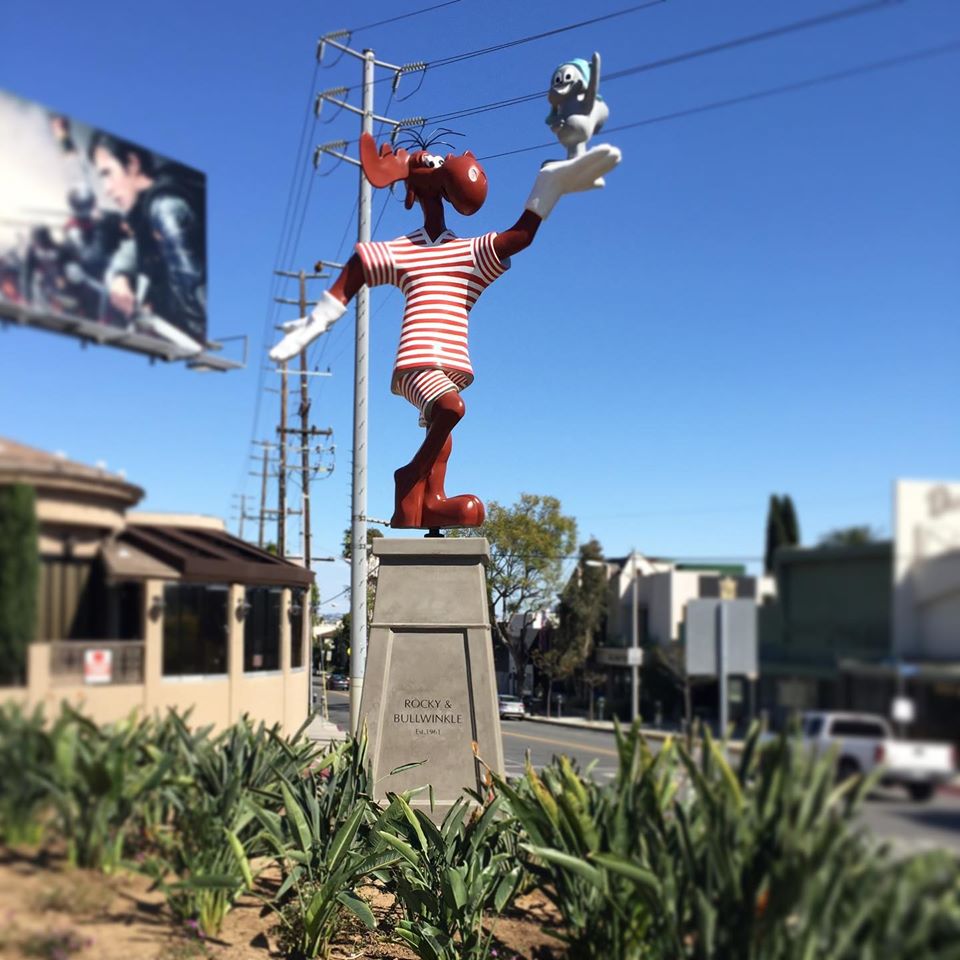 Rocket J. Squirrel and Bullwinkle J. Moose were the stars of Jay Ward Productions' most popular cartoon, "The Bullwinkle Show." On September 24, 1961, on the day of the animation's premier, a crowd of 5,000 people gathered outside of Jay Ward Productions' animation studio, on the Sunset Strip at 8218 Sunset Boulevard (across from the Chateau Marmont), for the unveiling of the artwork. The 12-foot statue was built to parody a statue directly across the street -- a bikini-clad, spinning showgirl on a billboard advertising the Sahara Casino in Las Vegas. And, each time the spinning showgirl's bikini changed, so did Bullwinkle's painted costume. In addition, the "elbowprint" was first introduced in 1961 at the sculpture's unveiling as a cheeky response to the handprints at the Grauman's Chinese Theatre. Elbows were used instead of hand so that no one would spill their martini.

On July 22, 2013, the statue was removed from its original location and fans feared that the Rocky and Bullwinkle statue had been lost forever. In fact, the statue was removed by Jay Ward Productions/Dreamworks Animation for a makeover and restoration by artist Ric Scozzari for “The Jay Ward Legacy Exhibit” at the Paley Center for Media in Beverly Hills in 2014.

In 2015, the Ward Family gifted the Rocky and Bullwinkle statue to the City of West Hollywood's Urban Art Collection for exhibition on the Sunset Strip. The sculpture was exhibited in the lobby of the City of West Hollywood's City Hall for a short time in 2016. The statue was dedicated to the City's Urban Art Collection in 2020, as part of the 60th anniversary of "The Adventures of Rocky and Bullwinkle and Friends" television show, at it's permanent location on the Sunset Strip, at Sunset Boulevard and Holloway drive.

Jay Ward’s creations, groundbreaking at its time, has continued to live on in many forms and on varying, diverse platforms, while influencing contemporary cartoons to this day. Some recent projects include the Emmy nominated “Mr. Peabody and Sherman Show” on Netflix and the Emmy nominated latest revamped “Rocky and Bullwinkle Show” on Amazon Prime. There have been several live-action films over the years based upon the legendary characters from Jay Ward: George of the Jungle (1997), Dudley Do-Right (1999) and the live-action and animated The Adventures of Rocky and Bullwinkle (2000) and an animated feature Mr. Peabody and Sherman (2014). Jay Ward Productions is currently in partnership with Dreamworks/Universal to continue the legacy of entertainment properties and licensing around the world. The original Rocky and Bullwinkle show voice over actors included the late Hans Conried, the late Bill Scott (voiced Bullwinkle) and the late June Foray (voiced Rocky).

For questions, contact Rebecca Ehemann, Public Art Administrator at (323) 848-6846 or rehemann@weho.org. For people who are deaf or hard of hearing, please call, TTY: (323) 848-6496. To learn more information about the City of West Hollywood and its arts programs visit www.weho.org/arts.