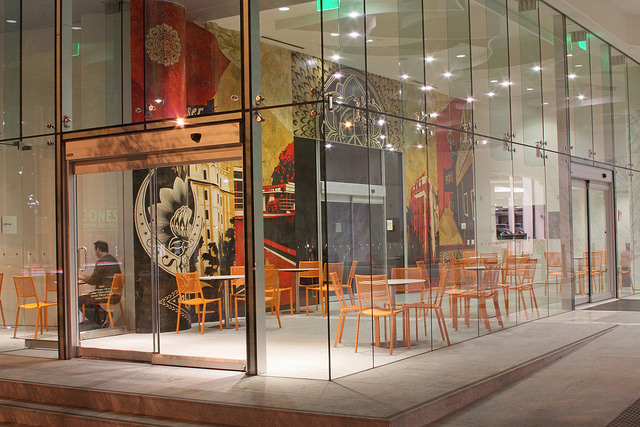 About the artwork: This mural, located near the City Council Chambers entrance on the Auto-Court level, provides a deeper contextual link between the library and the community it serves. Through online and paper surveys, the community was solicited to give input used to inform the imagery and iconography depicted in the mural. The artist, known for layering of images, has created a deeply dimensional “portrait” of West Hollywood that reflects historical and architectural elements of the City. This work provides a historicallysignificant and community-based project that is not unlike a contemporary version of the highly-regarded Works Progress Administration (WPA) murals completed in the 1930’s in public buildings throughout the United States.

About the Artist: Shepard Fairey is an American graphic artist and social activist. Part of the Street Art movement, Fairey communicates his brand of social and political critique via murals and public spaces. His iconic Hope (2008) portrait for then-presidential candidate Barack Obama is perhaps his most well-known work, in addition to his Obey (1992) campaign, which started while Fairey was enrolled at the Rhode Island School of Design. Born Frank Shepard Fairey on February 15, 1970 in Charleston, SC, the artist borrows from graphic styles of the 20th century, blurring the boundary between high and commercial art through type and image. His work is included in the collections of the Smithsonian, Washington D.C., the Los Angeles County Museum of Art, and the Victoria and Albert Museum, London. He currently lives and works in Los Angeles, CA.