In response to coronavirus disease (COVID-19), the City of West Hollywood is taking every precaution to prioritize community health and well-being. Based on public health recommendations to slow the rate of transmission of novel coronavirus, the City of West Hollywood is immediately cancelling all non-essential events including City-sponsored events, City co-sponsored events, and City-funded events -- as well as any events or filming that require a permit -- through June 30, 2020. The City is monitoring local, state, and federal updates and recommendations and will re-evaluate rescheduling events and meetings in the future as the situation evolves. 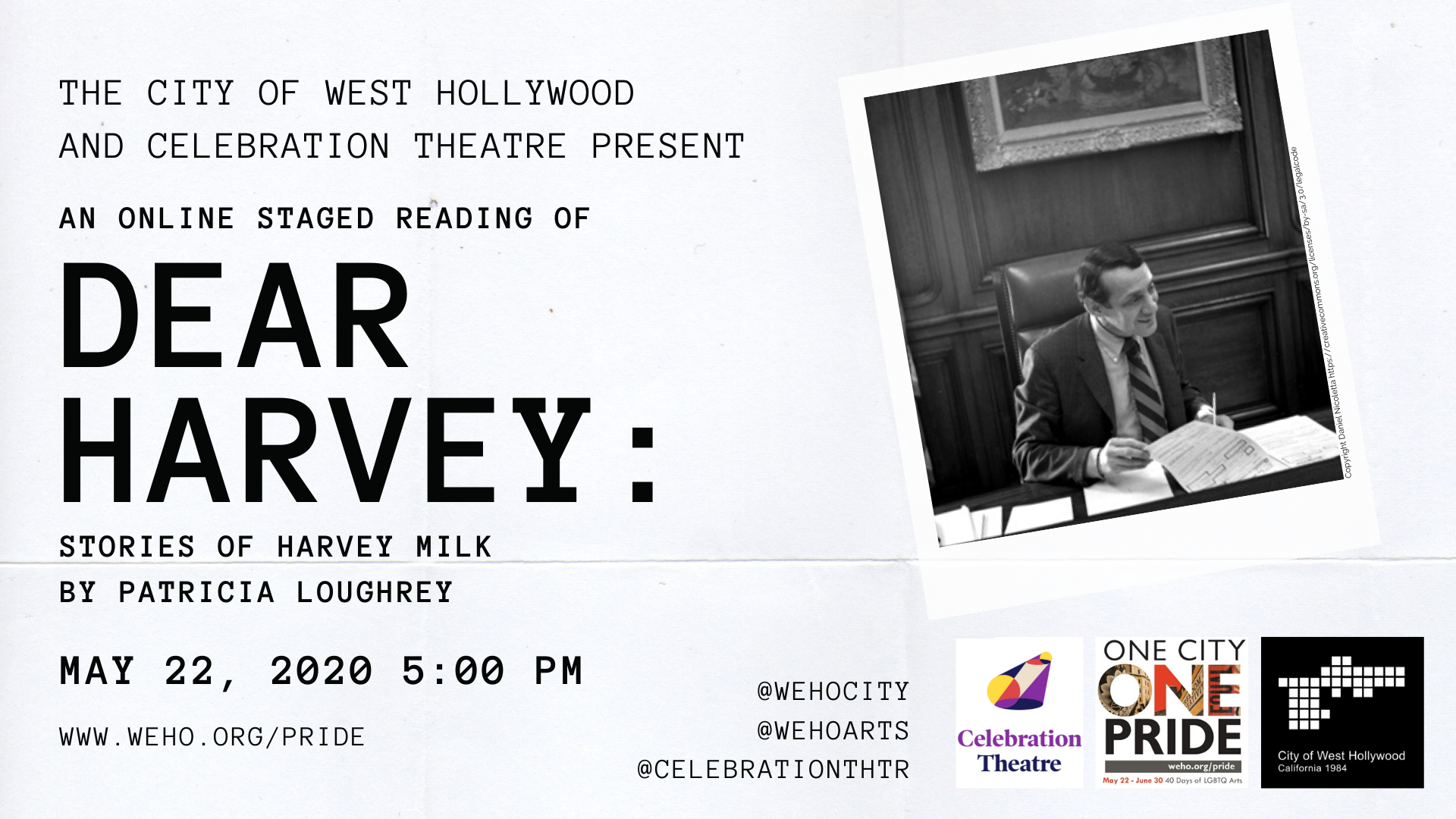 One City One Pride Kick-off/WeHo Reads:

Join the City of West Hollywood's Arts Division online on Friday, May 22 at 5:00 PM for the kick-off of the One City One Pride LGBTQ Arts Festival and official City celebration of Harvey Milk Day, featuring a free staged reading of Patricia Loughrey's Dear Harvey. The reading is produced and directed by Michael A. Shepperd of Celebration Theatre, LA's oldest LGBTQ theatre founded in 1982.

Extensively researched, this documentary-style ensemble play recounts the life and lasting impact of groundbreaking activist and politician Harvey Milk, as told by the people who knew him best, featuring a cast of professional actors, elected/appointed officials and community members.

To RSVP for this event and learn about other One City One Pride events please visit www.weho.org/pride. 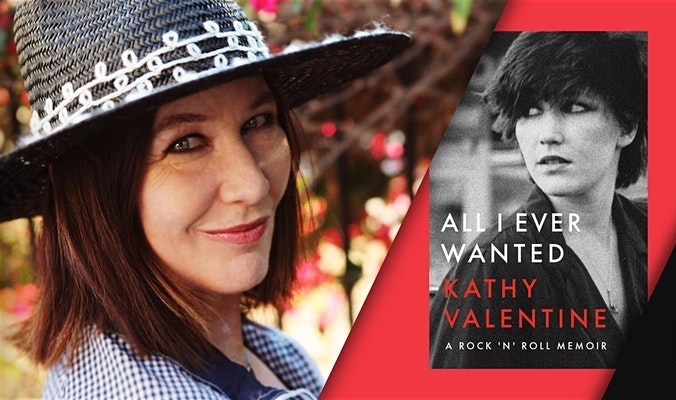 WeHo Reads: Kathy Valentine discussing and signing All I Ever Wanted: A Rock n' Roll Memoir

A limited number of free tickets (which do not include a copy of the book) will be provided to West Hollywood residents upon providing proof of residency via a government ID, lease or utility bill. Please confirm your address is in West Hollywood by visiting www.weho.org/streets, and email Mike Che, Arts Coordinator, at mche@weho.org to reserve tickets. There is a limit of 2 tickets per person and tickets may not be resold.

At twenty-one, Kathy Valentine was at the Whisky in Los Angeles when she met a guitarist from a fledgling band called the Go-Go's--and the band needed a bassist. The Go-Go's became the first multi-platinum-selling, all-female band to play instruments themselves, write their own songs, and have a number one album. Their debut, Beauty and the Beat, spent six weeks at the top of the Billboard 200 and featured the hit songs "We Got the Beat" and "Our Lips Are Sealed." The record's success brought the pressures of a relentless workload and schedule culminating in a wild, hazy, substance-fueled tour that took the band from the club circuit to arenas, where fans, promoters, and crew were more than ready to keep the party going. For Valentine, the band's success was the fulfillment of a lifelong dream--but it's only part of her story. All I Ever Wanted traces the path that took her from her childhood in Texas--where she all but raised herself--to the height of rock 'n' roll stardom, devastation after the collapse of the band that had come to define her, and the quest to regain her sense of self after its end. Valentine also speaks candidly about the lasting effects of parental betrayal, abortion, rape, and her struggles with drugs and alcohol--and the music that saved her every step of the way. Populated with vivid portraits of Valentine's interactions during the 1980s with musicians and actors from the Police and Rod Stewart to John Belushi and Rob Lowe, All I Ever Wanted is a deeply personal reflection on a life spent in music. (University of Texas Press) 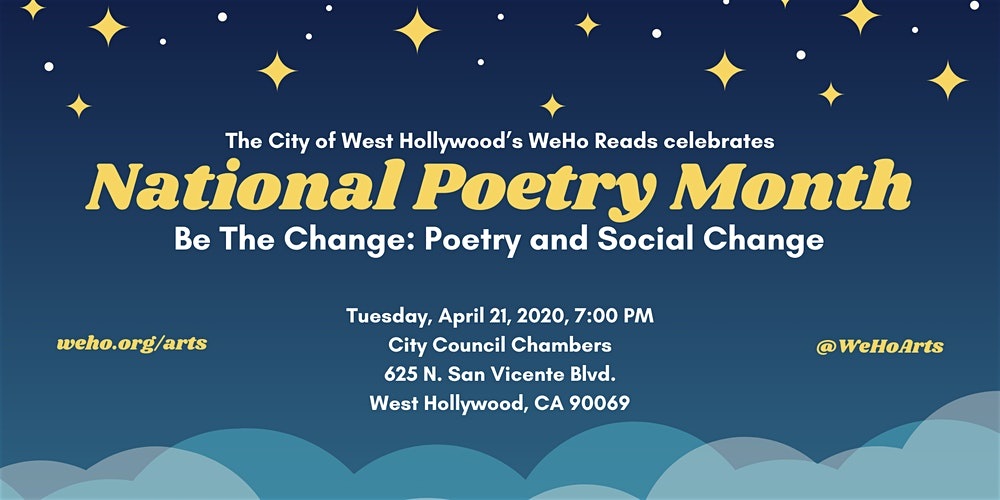 Be The Change: Poetry and Social Change

Inspired by Gandhi's message of "You must be the change you want to see in the world," join West Hollywood City Poet Laureate Charles Flowers for a reading and discussion about poets as agents of social change, and how poetry can play a role in our most critical discussions (race, immigration, homelessness). Featuring Morgan Parker, Verónica Reyes, and Brian Sonia-Wallace. Presented by the City of West Hollywood as part of WeHo Reads Celebrates National Poetry Month. Following the reading, there will be a small reception hosted by the Friends of the West Hollywood Library and books will be available for purchase from Book Soup.

Award-winning author Dr. Emil Draitser will discuss this fascinating topic,and present his new book Farewell, Mama Odessa (Northwest-ern University Press, 2020). Set in the summer of 1979 at the height of the movement to free Soviet Jewry and dedicated to its activists, Farewell, Mama Odessa is an autobiographical book that explores the reasons for Jewish emigration from the Soviet Union, describes his characters’ anxiety as they make their way to America and the challenges they face in a new land.

Dr. Draitser is an author of twelve volumes of artistic and scholarly prose, including Shush! Growing Up Jewish under Stalin: A Memoir; Stalin’s Romeo Spy; and Forbidden Laughter: Soviet Underground Jokes. He is also a professor emeritus of Russian at Hunter College of the City University of New York. (www.emildraitser.com) 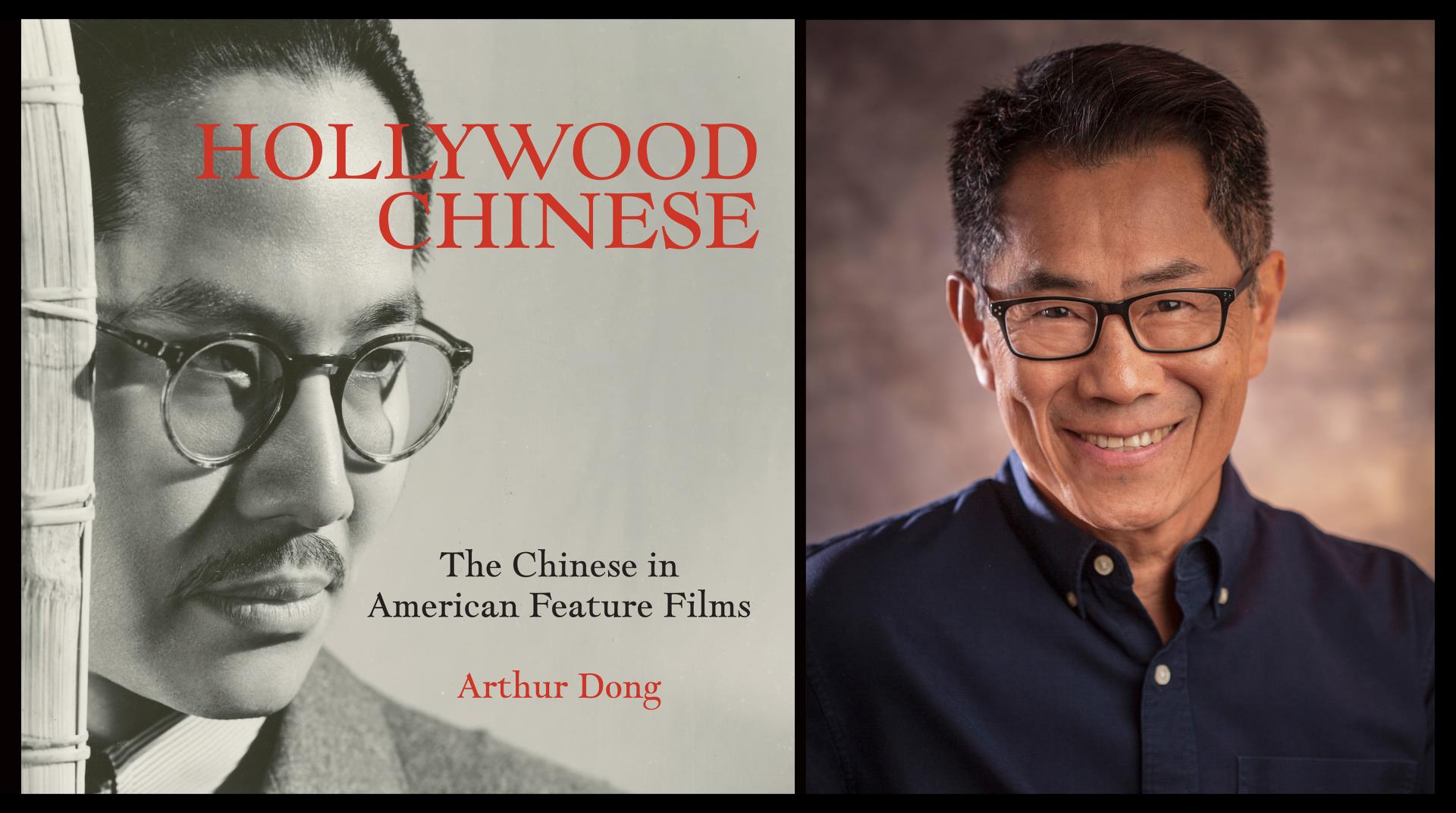 Growing up during the 1960s, Chinese-American filmmaker and author Arthur Dong saw plenty of Hollywood movies where portrayals of Asian people leaned heavily into stereotypes or, worse, were outright offensive and with many roles played by white actors, a practice commonly referred to as “yellowface.”

This curiosity would motivate Dong to make documentaries and films about the Chinese and LGBTQ communities. With his book, “Hollywood Chinese: The Chinese in American Feature Films,” the Oscar-nominated filmmaker dives deep into the history of Chinese representation in U.S. cinema, from early depictions of San Francisco’s Tong Wars in the early 1900s to hit romantic comedy “Crazy Rich Asians” in 2018.

He touches on the history of stereotypical characters like the villainous Fu Manchu, the game-changing presence of Hollywood’s first Chinese American movie star, Anna May Wong, and other notable, if lesser known, junctures in pop culture history — like how the 1962 film “Confessions of an Opium Eater” became the impetus for starting East West Players, the Los Angeles-based Asian American theater company, still in existence today. 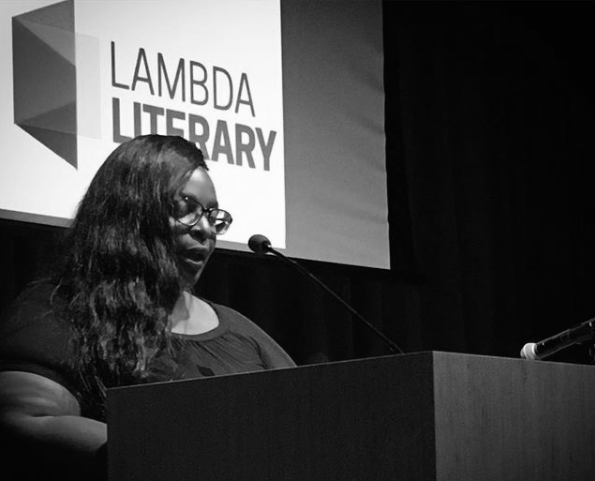 Join the City of West Hollywood's Arts Division and Lambda Literary for readings from the Southern California finalists for the annual Lambda Lit Awards in LGBTQ literature. List of readers to come soon.

Presented as part of the City's One City One Pride LGBTQ Arts Festival (May 22 - June 30). More info at www.weho.org/pride or @wehoarts. 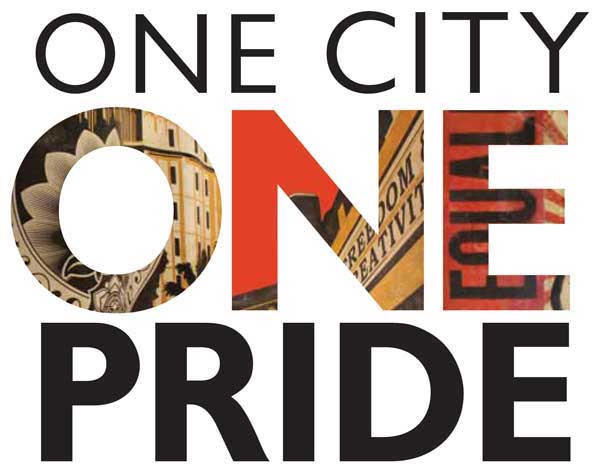 One City One Pride - Day of Art

Join the City of West Hollywood's Arts Division for a full day of dance, literature, and film on our annual One City One Pride Day of Art

WeHo Reads programs included for that day include:

Rainbow Warrior - A panel discussion about this memoir of Gilbert Baker, the man who is credited with created the Rainbow Flag.

Presented as part of the City's One City One Pride LGBTQ Arts Festival (May 22 - June 30). More info at www.weho.org/pride or @wehoarts. 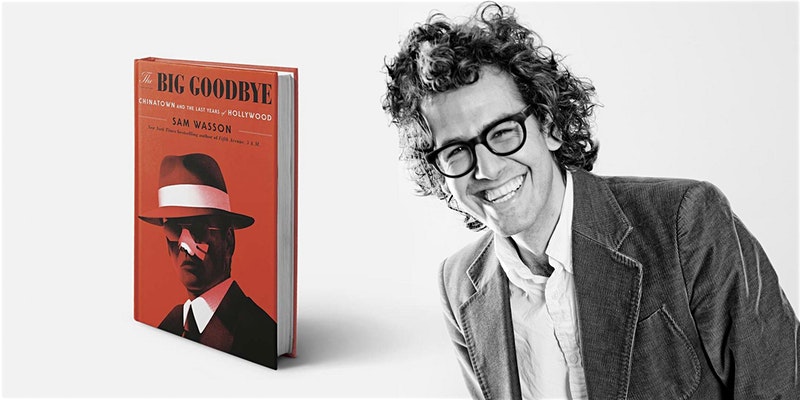 Join the City of West Hollywood’s WeHo Reads program and Book Soup for Sam Wasson discussing and signing The Big Goodbye: Chinatown and the Last Years of Hollywood. He will be in conversation with director and screenwriter James Gray (Ad Astra, The Lost City of Z).

A limited number of free tickets (which do not include a copy of the book) will be provided to West Hollywood residents upon providing proof of residency via a government ID, lease or utility bill. Please confirm your address is in West Hollywood by visiting www.weho.org/streets, and email Mike Che, Arts Coordinator, at mche@weho.org to reserve tickets. There is a limit of 2 tickets per person and tickets may not be resold.

Chinatown is one of the best films of 1970s cinema. Its twist ending is the most notorious in American film and its closing line of dialogue the most haunting. Here for the first time is the incredible true story of its making. In Sam Wasson's telling, it becomes the defining story of the most colorful characters in the most colorful period of Hollywood history. Here is Jack Nicholson at the height of his powers, as compelling a movie star as there has ever been, embarking on his great, doomed love affair with Anjelica Huston. Here is director Roman Polanski, both predator and prey, haunted by the savage death of his wife, returning to Los Angeles, the scene of the crime, where the seeds of his own self-destruction are quickly planted. Here is the fevered dealmaking of "The Kid" Robert Evans, the most consummate of producers. Here too is Robert Towne's fabled script, widely considered the greatest original screenplay ever written. Wasson for the first time peels off layers of myth to provide the true account of its creation. Looming over the story of this classic movie is the imminent eclipse of the '70s filmmaker-friendly studios as they gave way to the corporate Hollywood we know today. In telling that larger story, The Big Goodbye will take its place alongside classics like Easy Riders, Raging Bulls and The Devil's Candy as one of the great movie-world books ever written. (Flatiron Books)

Questions about the event? Please call Book Soup at 310-659-3110 or visit www.booksoup.com 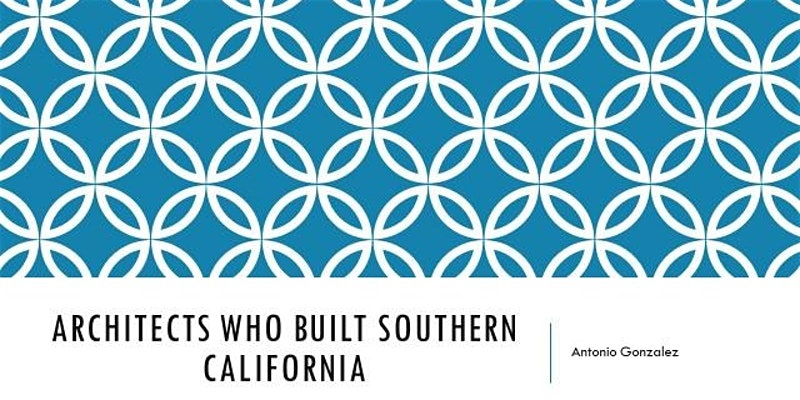 In the early 1900s, the population of Southern California exploded, and the cities grew at such a rapid pace that builders could hardly keep up. Among those who settled in the area were ten architects looking to make their marks on the world. Claud Beelman, a man who never received a college degree, would go on to design the Elks Lodge in Los Angeles. Albert C. Martin, architect of Grauman’s Million Dollar Theater, founded a company that is still going strong more than one hundred years later, and Julia Morgan, the first woman architect licensed in California, was hired by William Randolph Hearst to design the Examiner Building. Join author Antonio Gonzalez as he tells the stories of the people behind some of Southern California’s most iconic buildings.

Antonio Gonzalez has a BA in journalism from the University of Iowa and an MLIS from San Jose State University. He is a member of the Odd Fellows fraternity, works in an architecture and fine arts library and has a blog where he post items related to architecture and his other interests (misterdangerous.wordpress.com).

This WeHo Reads (www.weho.org/wehoreads) book event is combined with an exhibition reception for:

In 2015, arts and historic preservation staff began a project of documenting all of the City’s designated historic properties. This exhibition shows a selection of photographs from the over 80 properties that were documented by West Hollywood photographer Tony Coelho, representing a wide array of architectural styles and associations with well-known architects and builders. These images celebrate West Hollywood - recognizing our past, present, and future.