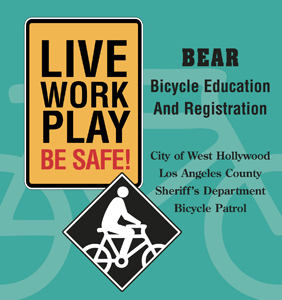 Need: The Bike Team is a vital part of the department and community as the deputies are able to easily patrol congested areas to maintain safety as well as promote positive community involvement and awareness.

Goals: The Bike Team has made it a priority to promote public awareness of bicycle safety for both youth and adults. The team also continues to promote positive communications between the citizens of West Hollywood and the Sheriff’ Department.

Recruitment: The Bike Team is always looking to add to its amazing team. If you are interested in becoming a Sheriff’s Deputy and would like more information on building an excellent career in law enforcement or are interested in serving as a reserve officer, please contact the West Hollywood Sheriff’s Station at (310) 855-8850.

The Bike Team promotes physical fitness and teaches adults and youth how to safely handle and maintain their bicycles.

The Bicycle Education and Registration (BEAR) Program will create a forum for education and training, as well as assist the Sheriff’s Department in quickly tracking and recovering stolen bicycles.