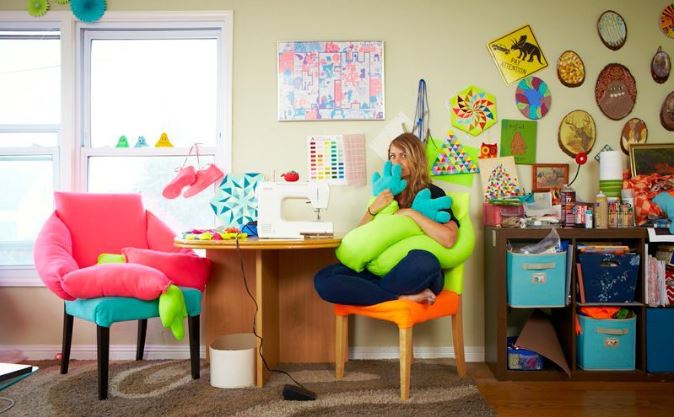 Kristin Farr explores color psychology, nostalgia and rainbows through her signature Magic Diamond and Magic Hexagon designs that have been painted on countless surfaces in thematic palettes. She carries a family legacy in folk art, which contributes to her exploration of human made objects that have talismanic properties. Color is central to her work and she is directed by the neurological condition synesthesia in which her mind associates words and letters with specific colors. She has painted many public artworks internationally and has been commissioned by corporate clients including Nike, Facebook and Google. She lives and works in Richmond, California.The monsters on this Cityline bus are meant to bring joy and delight as they ride along with passengers, waving at everyone in traffic.

Danielle Garza a.k.a. Ellierex is a Los Angeles-based mixed media artist. Wildly swirled colors and kaleidoscopic designs of a psychedelic nature are the outcome of her painting, redefining the medium of handmade paper marbling. An aqueous surface painting technique produces patterns similar to smooth marble or other kinds of stone. She “hits the remix button” on traditional marbling by combining it with her own unique methods and collaging found paper, to create glimpses of surrealist fantasy worlds that entice viewers to get up close and personal with a contemplative or escapist experience. Among Ellierex's creative achievements are large-scale installation public artworks, album covers for recording artists, print design for film and television, exhibitions throughout galleries across the U.S. She has works in private collections in New York City, Phoenix, Los Angeles, Sweden, and Australia. 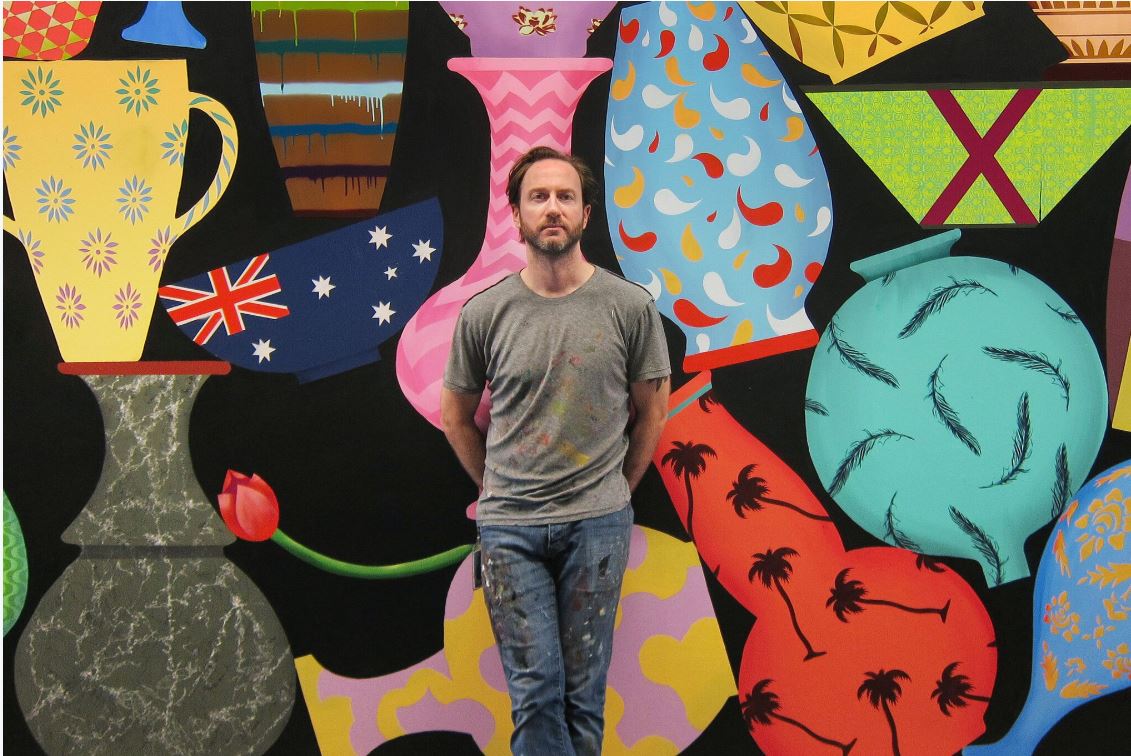 Casey Gray is an contemporary artist working primarily in painting and occasionally in printmaking, illustration and site-specific murals. His work explores our relationship to common objects and symbols, and their ability to hold meaning, tell stories and create identity.  Gray received his MFA in painting from the San Francisco Art Institute, and his BA in painting and printmaking from San Diego State University. He has exhibited extensively across the United States and abroad, and has been published widely both in print and online media including Vice, Juxtapoz, The San Francisco Chronicle and New American Paintings among others. He has also collaborated with major brands such as Nike, Converse, Pabst Blue Ribbon and PAX on special projects. Casey lives and works in San Francisco, California.

"My idea for this project is based of an ongoing series of paintings I have been making for the last few years that feature a multitude of vases and other containers, arranged in a multitude of ways. The vessel has been used a metaphor for the human body for centuries, and continues to be used widely today. It is one of the human race's oldest symbols, and one of our most basic primitive inventions. My piece for the West Hollywood Cityline project features a variety of uniquely painted vases, all leaning on each other for support. The different patterns on the vases represent the diversity of the community, and the image as a whole symbolizes the importance of community and working together to achieve our goals. If one vase is removed from the image, the whole structure crumbles, and in this way we are all connected. Scattered throughout the design are various fruits, flowers and sports equipment as well, loosely promoting the importance of love, leisure and good nutrition. Lastly, there are a few eyeballs hidden among the design, reminding the viewer that there are people actually inside the bus looking out. They personify the entire design, giving it a further sense of humanity." 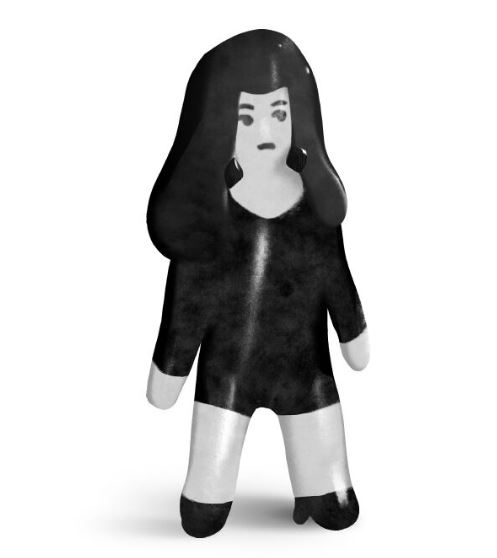 Angie Wang is a cartoonist, editorial illustrator, and designer on the animated TV show Steven Universe. She is also one of the co-founders of the independent comics fest Comic Arts Los Angeles.  Of this piece she says,

"I hope this bus becomes a peaceful garden for you to travel in." 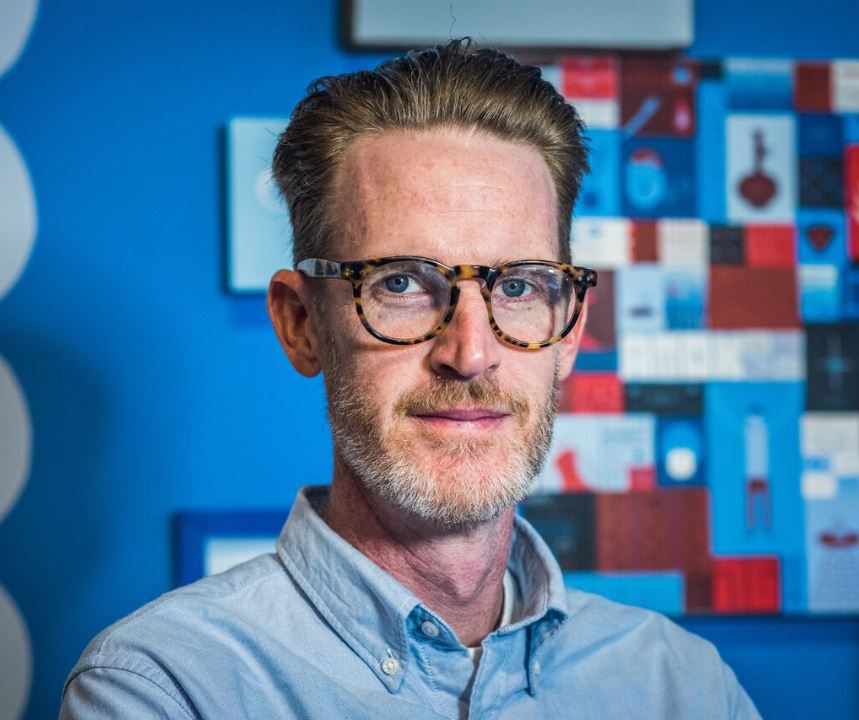 Jim Houser was born in 1973 in Philadelphia, Pennsylvania, the city where he currently resides. He is a self-taught artist and an honorary founding member of the Philly-based artist collective Space1026. Houser’s installations create a mapping system, cataloging his thinking . His work explores such themes as cadence of speech, science and science fiction, sickness and disease, plants and animals, time travel, ghosts , the art of children and the gravity of fatherhood , codes and code breaking, music and music making .Through Houser’s signature style of visual poetry and personal iconography, the artist extends his practice of self-examination to include the topic of art making itself. By cataloging his experiences and feelings through a unique pictorial language, the artist creates his own brand of curative iconography. Houser’s aesthetic often mixes stylized figures, hand-drawn typography and geometric shapes, creating quilt-like collages in a cohesive color palette.  Houser’s collages, paintings and installations have been exhibited in museums and galleries throughout the United States, Europe, Australia and Brazil. His work is included in the permanent collection of the Philadelphia Museum of Art and the Philadelphia Academy of Fine Art.