The City of West Hollywood has long supported increasing its transit options. The West Hollywood City Council, in December 2015, approved a plan to conduct outreach and to build regional partnerships in support of a Metro rail project that would extend the Metro Crenshaw/LAX Line to West Hollywood and connect to the Metro Red Line. The proposed Northern Extension of the Crenshaw/LAX light rail transit line would provide critical north-south connections to, from, and through West Hollywood and would enhance the existing Metro regional rail network.

This project fact sheet summarizes key project benefits from unprecedented ridership estimates and expanding access to jobs, healthcare, and major destinations to a fast and efficient alternative to traffic and congested bus routes that reduces the need for thousands of transit riders to travel out of their way to transfer.

Metro is expected to release their Advanced Alternatives Screening Study in August 2020 summarizing additional outreach and technical analysis with recommendations to narrow the number of alternative routes to carry forward into environmental analysis from five to two or three. The alternative routes under consideration are shown in the maps below.

As Metro prepares to move into environmental analysis, the City of West Hollywood is conducting ongoing community and regional outreach and a Funding and Project Delivery Strategy Study to identify financial strategies to accelerate the project in accordance with Metro policy. For more details on the Funding Study, scroll to the "Funding and Project Delivery Strategy Study" section towards the end of this page. 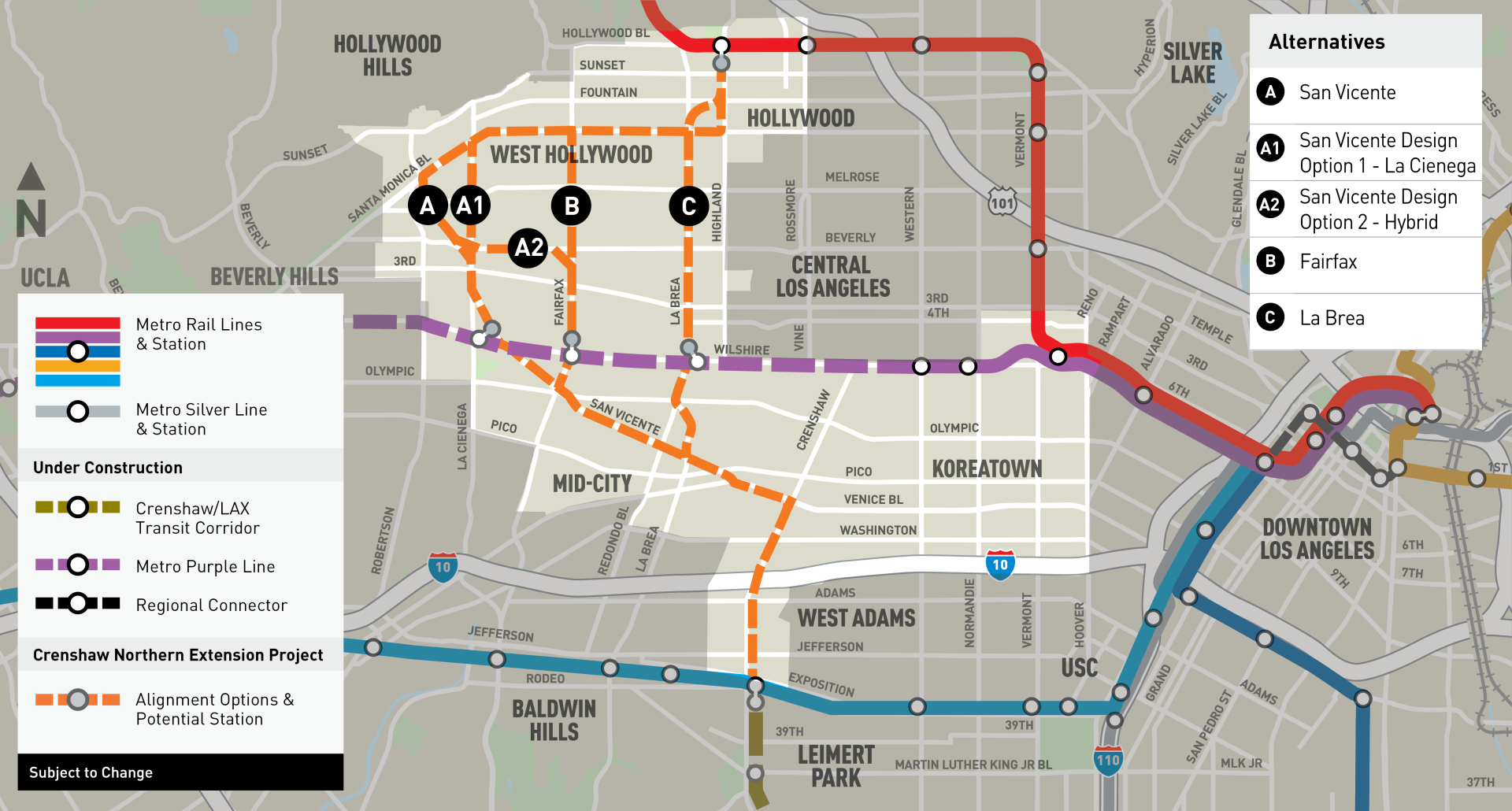 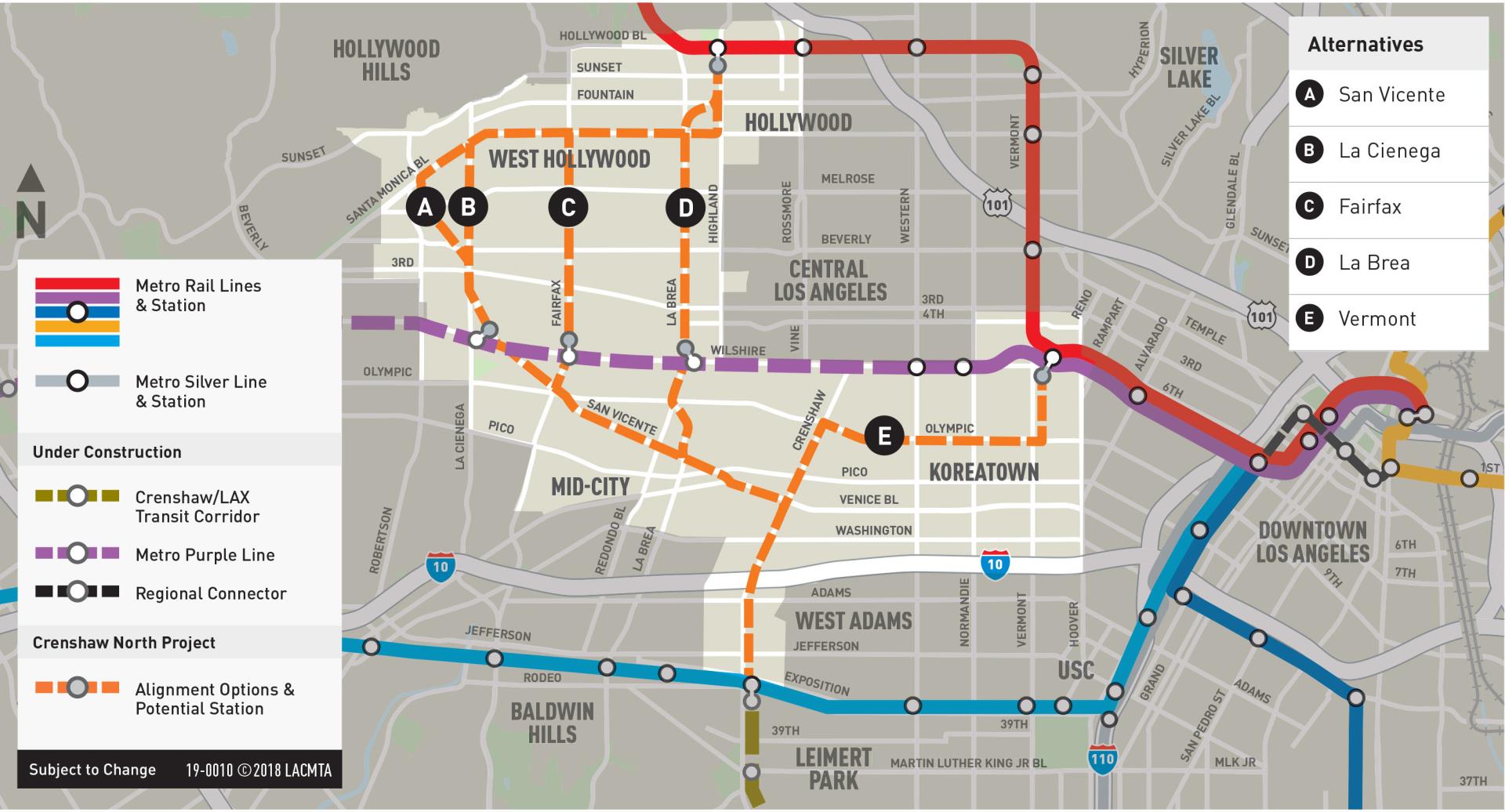 The survey results are summarized in the April 20, 2020 City Council Staff Report  and the abbreviated slides presented at the City Council Meeting. A longer series of slides with information on additional findings is available here.

More detailed additional outreach and research focused on exploring community attitudes towards potential City funding levels and funding sources will be conducted after the ongoing COVID-19 crisis has subsided. This information will inform discussions on a potential funding package with agency partners including Metro, the City of Los Angeles, and the County over the next 18-24 months.

On March 4th, 2020, the Los Angeles City Council unanimously approved a motion giving City of Los Angeles staff formal direction to work with West Hollywood City staff, Metro staff, and County staff on the acceleration and implementation of Crenshaw North. The Motion was authored by the Los Angeles Councilmembers David Ryu, Paul Koretz, and Herb Wesson, who all represent districts along the future line. The Motion directs the above City of Los Angeles departments to participate on four main tasks related to the CNE:

The City of Los Angeles Motion was an important milestone as well as a significant logistical step to facilitate effective interagency coordination during Metro’s upcoming EIR and parallel efforts to develop a mutually acceptable potential funding package to ultimately implement the project.

In August 2020, the Metro Board will receive an update and Metro staff recommendations on the CNE project including Metro’s Final Screening Study; the City’s package of Phase 1 Funding and Project Delivery Strategic Plan documents; and contracts for the environmental analysis necessary to move the project forward and inform the major decision to select a single locally preferred alternative route and move into more detailed engineering work. The City will publish the details of the Metro Board Meeting where this item will be considered, including how to submit public comments,  as soon as it is confirmed both on this webpage and across the other channels of City communication.

Metro held their second round of community meetings in fall 2019 to gather additional feedback from the public on destinations, community concerns, design considerations, and potential alternative routes.The slides from Metro's community meetings are available online and those that could not attend a meeting in person are encouraged to email their comments to: crenshawnorth@metro.net

Check Back for Updates!

Regional Connectivity Map: Connecting Five Metro Rail Lines from the South Bay to the San Fernando Valley and Closing a Gap in the Metro System Unlocking the Heart of LA 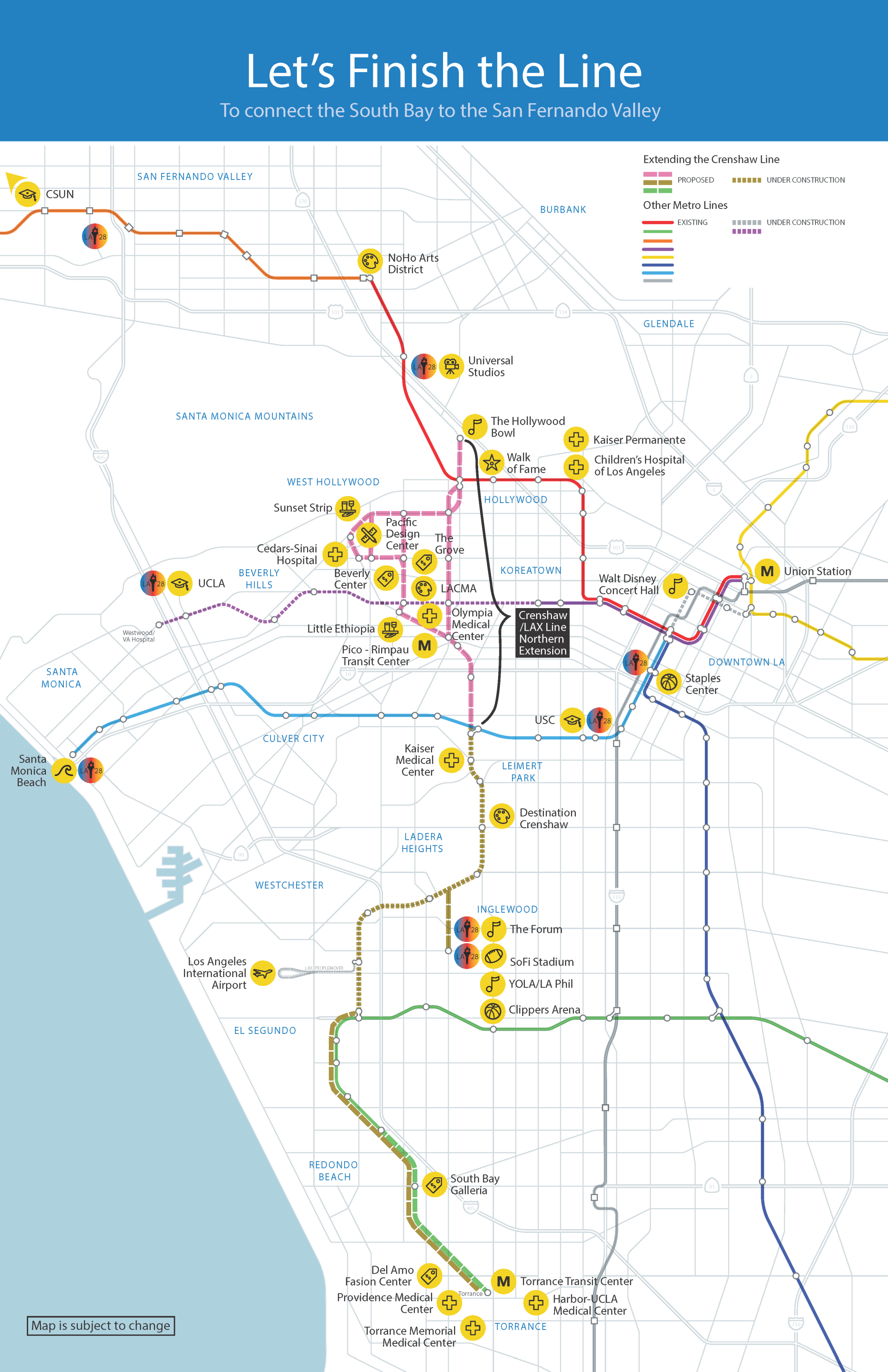 8.5 miles of the Metro Crenshaw/LAX light rail transit line are currently under construction in Los Angeles, Inglewood, and El Segundo from the Metro Green Line to the Expo Line where the current project terminates at the existing Expo/Crenshaw station. The project will serve the Crenshaw District, Inglewood, Westchester, and LAX (via a people mover connection being constructed through a separate project).

The Northern Extension of the Crenshaw/LAX line would bring the light rail line north through Mid City, West Hollywood, and Hollywood to the Metro Red Line resulting in between 5-9 new stations and 6.5-9.5 miles of new track depending on which alignment alternative is ultimately selected.

Passed in November 2016, the Measure M transportation sales tax measure allocates $2.33 billion towards the project with groundbreaking not scheduled until 2041. West Hollywood residents strongly supported each of the transportation sales tax initiatives in Los Angeles County, surpassing all other communities in the County except Cudahy in the degree of their support (Measure R 83.6%, Measure J 81.4%, Measure M 86%).

On May 7, 2018 the City Council formally voted to support accelerating the Northern Extension of the Metro Crenshaw/LAX light rail transit line to West Hollywood and Hollywood with Resolution No. 18-5055. This action builds upon previous Council actions dating back to before the passage of the Measure M transportation sales tax measure and a previous commitment from Metro CEO Phil Washington to get the project shovel-ready and competitive for future funding opportunities.

The Resolution made the City of West Hollywood the first of the 88 cities in Los Angeles County to seek acceleration of a transit project under Metro’s Early Project Delivery Strategy. Namely, the Council voted to:

On July 27, 2018 the Metro Board of Directors voted to release the Crenshaw Northern Extension Feasibility/Alternatives Analysis Study Final Report—an important milestone in the planning and environmental clearance process necessary to make the project competitive for future funding opportunities and acceleration. Overall, the Feasibility Study shows that the Northern Extension project will have the highest ridership of any light rail line in the United States and serve some of the densest, most job rich, and most congested areas in Los Angeles County while providing time-saving alternatives to highly congested travel routes. Five alternative rail alignments were studied in the Feasibility Study but additional outreach and technical studies were funded and authorized by the Metro Board of Directors on September 27, 2018. Metro is expected to release a follow-up screening study in August 2020 summarizing outreach to West Hollywood and other communities along the corridor and additional technical analysis to refine the number of alternatives that will be carried forward into Metro's upcoming Environmental Impact Report (EIR).

On November 5, 2018 the West Hollywood City Council approved contracts with top financial firms HR&A (with InfraStrategies) and Scully Capital (now part of JLL) to study how how the City could raise additional local, state, federal, and private investment to ensure the project is completed and help accelerate the project by almost 20 years. This effort, known as the Funding and Project Delivery Strategy, is being conducted with input from Metro as well as both the City and County of Los Angeles. For more details, see the flyers below: 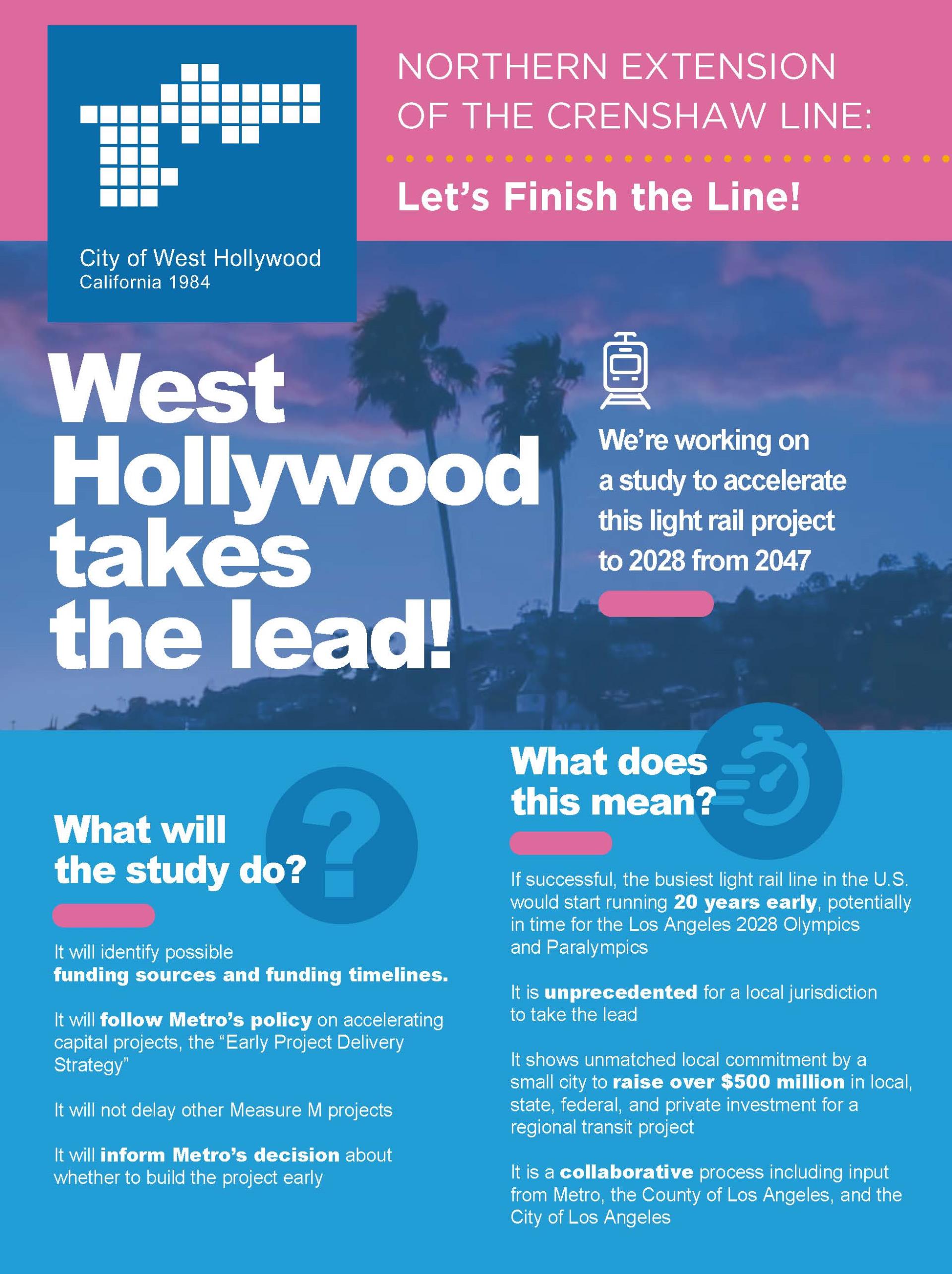 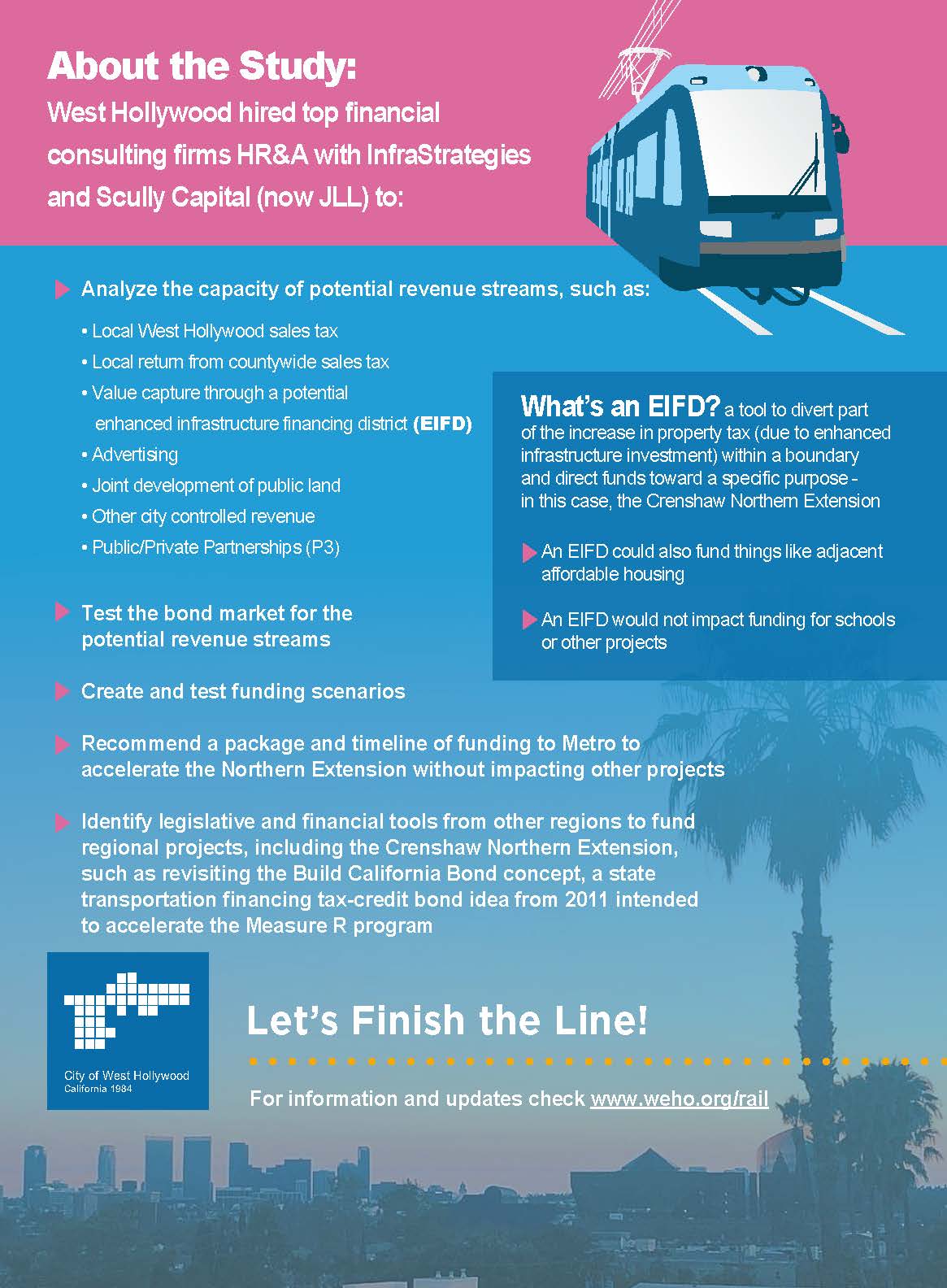 On September 23, 2019 the West Hollywood City Council voted to transmit the initial findings of the first phase of the Funding and Project Delivery Study (summarized below) to Metro in fulfillment of the next steps outlined in Metro's September 2018 Board Action which challenged the City to study potential funding sources and demonstrate “that a reasonable ability to fund, operate and accelerate delivery of the project exists.” Further analysis on potential financing structures will continue based on the results of ongoing discussions with the City of Los Angeles, the County of Los Angeles, and Metro, and as Metro gets closer to narrowing the number of alternative routes under consideration.

In addition to any private, state, and federal funds—which the project would be highly qualified for—the Funding Study found that the City could potentially contribute up to $1.13 billion between 2020-2065.  It’s important to note that this is an estimate of potential capacity and not a commitment of funding. The structure, makeup, and quantity of any future capital contribution would be developed based on input from and approval by the City Council, as well as negotiation with Metro, the City of Los Angeles, and the County of Los Angeles.  Any capital contribution would then be subject to a formal Memorandum of Understanding with some, or all, of the jurisdictions previously mentioned. The $1.13 billion potential funding capacity estimate includes the following key funding sources available between 2020-2065:

With the completion of Phase 1, the next step for the funding study will be to finalize HR&A’s work and continue to work on JLL’s (formerly Scully Capital) analysis on potential financing structures, cash flow scenarios, and bonding capacity, which is considered Phase 2 of the funding study. Further discussions with the City of Los Angeles and the County of Los Angeles on their potential participation in an EIFD as well as a future memorandum of understanding (MOU) streamlining project related permitting and environmental analysis are also ongoing. Metro’s screening study will be released in August 2020 and the final results will be communicated to the Metro Board. The Metro board will consider authorizing a contract for environmental analysis at that same August 2020 Metro Board meeting.

Once the Metro Board approves the environmental contract, the City will move forward with City Council consideration of a proposed a Rail Integration Study to prepare for future rail service and community identified concerns such as construction impacts and conduct the technical analysis necessary to advocate effectively for community needs during Metro's environmental analysis. The City will continue conducting outreach to keep West Hollywood residents and businesses informed throughout the process.

Additional information will be posted to this web page as it becomes available.

The regional All on Board Coalition and local West Hollywood Advocates for Metro Rail (WHAM) advocacy groups facilitated by the City also post regular updates to social media pages at the following links: 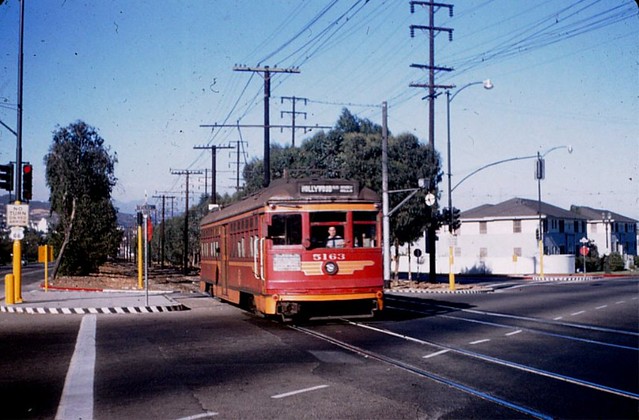